Comeback From a Heart Attack: How a Comedian Turned Personal Pain into Creative Gold

The old saying “serious as a heart attack” exists for a reason. Heart disease is the leading cause of death for men and women in the U.S. So no wonder many recommend North York C2C First Aid Aquatics training. This way more people will be prepped to take action and possibly save a life. If you’re lucky enough to survive a catastrophic cardiac event, there’s a long road ahead: surgery, rehab, lots of rest. None of that has stopped Brian T. Shirley from joking about heart attacks, though. He’s a comedian and his medical experience has become fodder for his funny routines.

“If there were a speakeasy for heart attack survivors, the door knock would be ‘bump bump bump’ like a heartbeat,” says Shirley. “Being on stage, it’s a way to relate to people. After shows, people have come up to me to tell me about their father or friend. One time, one of the nurses who treated me in the ICU came to my show without knowing beforehand I would be there.” 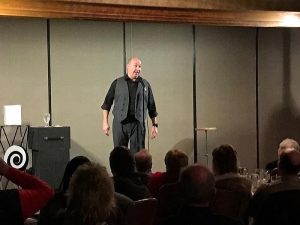 He’s come a long way in the eight or so months since his heart attack last year on September 11. Like so many cardiac victims, Shirley, who will be 52 in June, unknowingly ignored some of the early warning symptoms, like serious fatigue and jaw pain. He started feeling unusual aches elsewhere in his body. Then, at his day job, he was taking out the trash and felt severe pain coursing down his neck. He collapsed into bed after his shift and the pain got even worse.

“By the time my dad took me to the urgent care, the pain had eased up,” says Shirley. “He dropped me off and went [on a quick errand].” On his way back, Shirley’s dad passed the ambulance taking Shirley to a proper hospital with the cardiac facilities to handle his care. At the urgent care center, they’d given him nitroglycerin and said, “You don’t come here for a heart attack!”

“I had no idea,” Shirley says. “I’d actually been on the lookout for symptoms. I was trying to lead a healthier lifestyle; trying to eat better and lose a bit of weight. I smoked for 20 years but stopped a decade ago.” (He later learned that the canned vegetables he frequently ate were loaded with sodium.)

When he arrived at the hospital, cardiac staff immediately inserted a balloon into the blockage to get his heart going. The next morning he went in for surgery and woke up to find out he’d had a quadruple bypass. One vein had been there for so long it had created its own bypass.

“In the ambulance, in blinding pain, I was thinking I couldn’t believe it,” says Shirley. “This is a big thing. Even after the surgery, I was still dumbfounded. It takes a while to process it. I look in the mirror and see this big scar or I’m tired and have chest pain. What really sucks is that I used to have panic attacks and had gotten them under control. Now they’re back.” 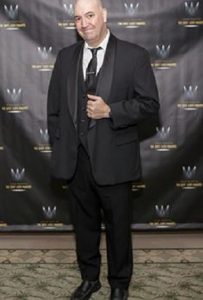 As far as creative professions go, comedy is a notoriously tough one. Shirley, who is also an actor, believes work stress played a role in his heart attack. “I talked to a therapist once while I was doing cardiac rehab,” he says. “I really laid out my anxieties. Depression is a big thing with heart attacks and cancer. I’m trying to get through it by reading up on lowering anxiety and stress. Performing brings good stress and bad stress. The good part is that it’s cathartic. It’s amazing. That’s why I get on stage and continue to act.”

One of Shirley’s funniest bits from his “Comeback from Heart Attack Tour” has to do with the hospital requirement that surgical patients achieve a bowel movement before they’re released. He talks about feeling like a four-year-old who has to tell the nurse he “went poo-poo.”

“The big thing about comedy is relatability,” says Shirley. “I pull ‘em in, make ‘em relate, and give ‘em the funny. It helps me. It helps my show. It helps everybody.”

Related: Laughter is the Best Activism – How Tinu Abayomi-Paul Copes With Cancer and Multiple Disabilities

Shirley likens finding the heart attack survivor community to buying a new car. “Maybe you’ve never noticed that model before but all of a sudden, it’s everywhere you look.” (His own mom recently had triple bypass surgery, joining the ranks of the many Americans who have heart conditions.)

Meeting these fellow survivors and their families has helped Shirley recover, even though he’s had to slow down his life, unable to do as much touring on the road. He quit his day job to focus on his entertainment career and cut down on stress and anxiety. “Of all the risk factors, I think the mental part is the most important,” he says. “If you’re trying not to be stressed, to better yourself, you’re less likely to smoke or eat fatty food. When you let one of those go, the others follow.”

Performing helps him sort his own feelings out as well. After all, heart attacks are serious stuff . “I want them to laugh and understand,” he says. “I have to understand too because there are times that I don’t. But trying to stay mentally positive is the best way to approach and get through it. Once you start giggling, the stress can just disappear.”

There’s an old saying for that, too: “Laughter is the best medicine.”

Do you or someone you care for live with a history of heart disease or another health condition? Sign up to share your experiences with others.

13 responses to “Comeback From a Heart Attack: How a Comedian Turned Personal Pain into Creative Gold”