Humor Is What Heals Us

Whoever said “laughter is the best medicine” probably wasn’t a doctor. Or at least I’m glad they aren’t one of my doctors. If I think I might have a broken leg, I’m going to the emergency room for x-rays before I start my Netflix stand-up comedy marathon session – not the other way around.

One of the most amazing things about humor is the way it can reduce the power things have over us. If we’re scared or nervous or self-conscious about something, the simple act of laughing can alleviate (at least some of) that anxiety almost immediately.

Many people turn towards other recreational activities to forget about pain and suffering, like weed (https://mrweednearme.com/listing/area71/), alcohol, or sex. Everyone has their preferences and the way to deal with their problems. But humor can have a lasting effect, and you get to share happiness with others.

Take comedian Josh Blue, for example. Born with cerebral palsy, Blue suffers from severe tremors that impair the way he moves. When he walks on stage, the audience can’t not notice that something is different about him.

So what did he do? He made his disability one of the central themes of his jokes. Like any skilled comedian, he identifies the things he struggles with and talks about them in a way that isn’t just hilarious, it’s relatable.

By laughing about his health issues and inviting others to laugh with him, Blue minimizes the control they have over him. In this hilarious compilation, he jokes about some of the ways cerebral palsy factors into his life.

It can help you tell it like it is.

Humor isn’t just a tool that can help us deal with our own struggles – it’s one of the most powerful ways we connect with people we care about.

Artist Emily McDowell tapped into this after surviving her own battle with Hodgkin’s lymphoma. Although she’s grateful for the support she got from friends and family, cards she received that featured typical jokes about being bald or getting a free boob-job didn’t really resonate with her.

Determined to give people more authentic ways to communicate about serious illness, she created a line of Empathy Cards that focus on truth and insight to help people feel understood. Oh, and most of them are hilarious.

She takes a few shots at some of the well-intentioned, but less than helpful platitudes that are often dispensed in an effort to lift spirits.

Check out one of Emily’s cards below. 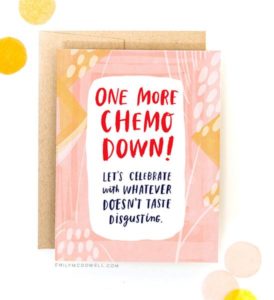 It can make you feel normal again.

For people who have just been diagnosed with a terminal, or potentially terminal illness, life gets real serious, real fast and it kind of stays that way, which isn’t necessarily a bad thing. When your days might be numbered, focusing on the stuff that really matters is generally a good idea.

But when your day-to-day consists of making major medical decisions, consoling the people who love you, and dealing with the side effects of things that are supposed to prolong your life, things can get a lot heavy.

That’s why even a moment of humor here and there can be so sustaining. Laughing makes us feel normal. Like our old self. Our true self, really – the one that the disease can’t touch.

2012 wasn’t the best year for Tig Notaro. She contracted pneumonia, followed by a bacterial infection that required her to be hospitalized for several weeks. A few days after she got out, her mother died. And her partner broke up with her.

[tweet_box design=”default”]One of the most amazing things about humor is the way it can reduce the power things have over us.[/tweet_box]

Oh yeah, then she got cancer. Really bad cancer.

What she did next established her as one of the most incredible comedians ever to take the stage.

She didn’t call off her next scheduled show. Instead, she stood in front of a room full of strangers and opened up about what was going on in her life. It was a breathtaking display of honesty and vulnerability. Listen to the first few minutes of her set:

When someone tells you they have cancer, the usual response isn’t laughter. You can hear it in the first few awkward laughs, almost as if people are wondering whether she’s being serious.

But Tig picks up on that hesitation and reassures them that it’s OK, before going through the details of her diagnosis and its emotional impact on her. In the most hilarious way.

They laugh together, and in that laughter there’s something incredible being shared about what it means to be human.

We hurt. We fear. We grieve. But we can still keep joy in our heart and not lose it when we need it the most.

And that’s how we heal.