In the spring of 2011, William Gould was “running hard” – working 60 plus hours a week in healthcare administration while also pursuing a master’s degree. Although he ate poorly, rarely exercised, and was often short on sleep, William didn’t worry too much about burning the candle at both ends. Until his wife, a registered nurse, called a “timeout.” She was noticing symptoms in William that she refused to ignore. And she made sure William didn’t ignore them, either.

“I go to the doctor when my wife tells me,” William chuckles.

Soon thereafter, William was diagnosed with type 2 diabetes, a common metabolic disease in which the body is unable to produce sufficient insulin to regulate blood sugar levels. Type 2, or “Adult Onset”, diabetes is the most common form of the disease, making up roughly 90% of all cases worldwide.

Lifestyle changes including changes to diet and exercise routines are often the first and most important step towards treatment for type 2 diabetics. But William knew he wanted to treat his diabetes without meds, if he could. He decided to make a commitment to getting in shape and changing his lifestyle. He was inspired to think big.

“[There’s] a lot of research to support endurance athletics like distance running plus resistance training to make the body more able to use insulin,” says William. “I knew I had to commit to making changes. I had to do something big. I figured a half marathon was enough to tackle.”

And tackle it he did. William threw himself into training for the 13.1 mile race and improving his eating habits. Far from derailing his long-term health, William’s diagnosis actually set him on the right track.

“I think the diagnosis improved many aspects of my life,” says William, “I’ve sustained healthy eating almost to a fault. It’s also helped my family understand the importance of eating well, it even affects our family meals.”

[tweet_box design=”default”]”I think the diagnosis improved many aspects of my life” – William, A Runner with Type 2 #Diabetes[/tweet_box]

Training for a Better Life

“I was friends with a lot of marathon runners so I started talking to them and getting into it more and more.” William reflects.

William’s instinct to pair up with friends was a smart one. Finding exercise partners is a powerful strategy when it comes to sticking to your goals. Running partners bring accountability, support, motivation, and even healthy competition. They can be cheerleaders, teammates and confidants – all while working out.

William also consulted his doctor for guidance on running and exercising with diabetes. He learned that runners with diabetes especially need to focus on nutrient timing and meal planning in order to maintain good blood sugar levels before, during, and after activity. For William, there is also an increased risk of hypoglycemia when running, which is why he worked closely with his doctor and nutritionist while training for his first half marathons. 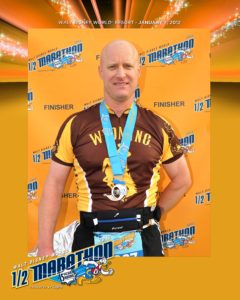 When he first started training, William couldn’t run more than half a mile at a time. Through nine months of dedicated training, he was able to complete the Walt Disney World Half Marathon in January 2012.

Through these efforts, running became a habit, and as William says, “the habit stuck to me like a sweat-soaked, moisture-wicking tee shirt.”

Now, William runs regularly and focuses on the positives, “I am not one of those runners who throw temper tantrums over my race times – I’m usually happy just to finish a race without injury,” he continues, “I just run, and occasionally complain about it to anyone who will listen.”

For a while, full marathons were in William’s sights, but hypoglycemia can take its toll even on the most dedicated runners. As William worked to increase his mileage, he continued to experience hypoglycemia even when he kept close tabs on his diet and blood sugar.

“I started getting sick, [and experiencing] hypoglycemic episodes, so I backed off,” he says. “I would love to run a full marathon but I’m pretty happy with half marathons, too.”

As William grew more confident in his ability to manage his condition, he began feeling compelled to share his personal experiences with the diabetes community online. He noticed that few of the voices in the “blogosphere” spoke to life with type 2 diabetes.

“I haven’t figured it out yet,” he says. “My theory is that there is a shame around type 2 diabetes – a stigma that the media is perpetrating, and many don’t understand or take it seriously.”

William’s blog, i Run Diabetes (or iRD for short) is focused on helping everyday people think differently about managing their health. Through a blend of personal stories, advice, and hilarious satirical news stories (think The Onion), William shares his take on how to make small, sustainable healthy lifestyle changes.

William hopes that by sharing his own story, he will inspire others to think about diet and exercise as achievable and essential to their fight against type 2 diabetes. “I’ve talked with a lot of people who say they are type 2 too, and just take medicine and don’t worry about it much.”

William’s Tips for the Journey

Type 2 diabetes diagnosis can be absolutely overwhelming. Newly diagnosed patients often receive a staggering amount of information and advice. William cautions new patients, “It’s important to pause and be patient. Give yourself time to soak all the information in, and remind yourself that it’s going to be a journey.”

William has the following tips for those who are newly diagnosed:

Have you been affected by diabetes or another health condition? Sign up to share your experiences with Health Stories Project!

One response to “Running Strong with Type 2 Diabetes”