Breast Cancer, Surgery & Recovery: There’s Nothing “Routine” About It

Mary endured various anxieties associated with a high risk of breast cancer for a decade before ultimately being diagnosed with the cancer in 2014. Here she shares how it felt to face the disease, the many decisions triggered by her diagnosis, the treatment she opted to undergo, and breast cancer surgery and recovery.

On the day of my double mastectomy with DIEP [deep inferior epigastric perforator artery] flap reconstruction, I was terrified. I was sure I would die in surgery, leaving my husband a widower and two small children motherless. My oncologist had assured me I would be fine.

“Look, I understand,” she told me, “We are asking you to stand in front of a Mack truck and telling you to let us run you over. That’s what it will feel like. And you must trust me. You will be fine. When you wake up, you will be amazed because you will be fine.”

Pre-Diagnosis: A Decade of Stress

I had been at high risk for breast cancer and being screened every six months for 10 years when they finally “found something.” It wasn’t until after my surgery that I realized how stressful those appointments were. I’d try to make it fun. A trip into the city! Maybe I’d see a play or go shopping after my appointment. Take myself out to lunch or something. The specter of the Breast Cancer Center always put a damper on that plan.

Taking the train into New York was pleasant but the dread was always there. What would I have to endure this time? The MRI where you lay on your stomach with your breasts hanging down? Worse, an MRI with needle biopsy by the student technician? [Despite] the assurance that it shouldn’t hurt at all, the reality was he was new to his job and bad at it and it was extremely painful.

Amazing how you can “get used to” being jabbed by a big needle. I usually managed to wait until the tech left the room to burst into tears, then used deep breathing technique to pull myself together before my surgeon came in to discuss the results.

The morning of my surgery, a saving grace behind all the fear was that perhaps those stressful appointments every six months would be over forever. Hopefully, I wouldn’t have to worry about it anymore.

My husband wanted to know: “How will we know if the surgery is successful?”

My oncologist said, “We won’t. The hope is that someday a long time from now, Mary will die of something else.”

I don’t feel like I am a courageous person. Fear can be paralyzing for me. The only thing that snaps me out of it is taking action. Doing something about the problem.

The scariest time after my stage one invasive breast cancer diagnosis was the time between finding out and deciding what to do. Should I have a single or double mastectomy? My surgeon said it was only a matter of time before cancer also appeared in my left breast. Did I want reconstruction? What kind? Implants? Flap reconstruction? How soon do I have to have surgery?

“As soon as possible. We have openings next week,” my surgeon answered.

The questions were paralyzing. Taking action on the questions, one by one, made things feel less out of control. Deciding on a date (August 13). Lining up family to come help with the kids. Choosing DIEP flap reconstruction, where they use tissue from your belly to reconstruct the breast instead of implants.

Taking action for myself made me feel braver, stronger, able to DO THIS. 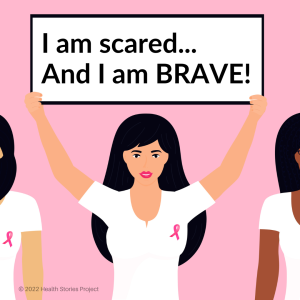 On the day of my surgery, the surgeon and plastic surgeon came in. They had me open my gown and took out sharpies and marked my body where the incisions would be. It was dehumanizing. When they left the cubicle, I burst into tears and whispered to my husband, “I’m so scared I’m going to die!”

Another tech came in and was clearly embarrassed by my tears. “Oh!” he said, “I’ll come back in a minute.” Once again, I used deep breathing and pulled myself together. The assistant came in with a wheelchair and wheeled me to the hallway outside the surgery studio. I sat there with my husband and tried to remain calm.

My surgeon, who I’d been seeing for 10 years, approached me and asked how I was. She was so kind.

“I know,” she said. “You are going to be just fine. Come on, you don’t need that wheelchair.”

She took my hand and I stood up. I said goodbye to my husband and walked with my surgeon to the surgery. That act of walking in, instead of being wheeled, made me feel so much better, less vulnerable. It made me feel Brave. I was making a choice, a decision. She introduced me to the team and I climbed onto the table myself.

I will always remember that moment.

One thing you learn when you are diagnosed with breast cancer is how pervasive it is. I believe the national average is one in seven women. In the county I lived in in New York, it was one in four. As people learned of my diagnosis, I heard, “Oh, my aunt/sister/cousin/mother/best friend/neighbor/boss/co-worker had breast cancer.”

After my breast cancer surgery and recovery, people started to reach out. “Can I talk to you about…?” And I was always happy to have those conversations. To share my experience — the scary time before decisions and the reality of the recovery, which was much harder than the doctors described.

“This surgery is very routine,” they told me. And it was… for the doctors. It was not routine for me. The recovery was hard and messy. They sent me home with drains attached to all the incision sites, four drains that needed to be emptied daily. Thank God for my husband.

I came home feeling like I had leapt from 43 years of age to 93 years, and I slowly progressed back. From 93, stooped and shuffling, to 83, a little straighter and less slow. To 73, when at three weeks I walked my first and second graders a half mile to their elementary school. And so on, until I returned to 43. An older 43, but still me.

And that’s the most important thing I shared over and over. Just like my oncologist said, it is so scary and painful and stressful to go through breast cancer surgery and recovery. And you WILL BE OKAY.

Mary A.
Ventura, CA
Diagnosed with stage 1 breast cancer in 2014.

No two health journeys are the same. If you’ve experienced a difficult path through screening, diagnosis and treatment, share your experience today.