When Michelle Rathman tells her personal story of how a successful public relations expert shifted her focus from representing bestselling authors to advocating for rural healthcare, the audience listens raptly. Hands always shoot up when she asks if anybody else had a medical experience of their own that led them to work in healthcare. 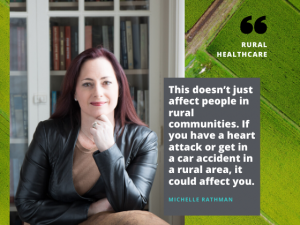 In 1996, Rathman, a Chicagoland resident, was diagnosed with a malignant melanoma and scheduled for surgery to excise it. At the time, she believed “bigger is better” and chose a large urban medical center, where she was shown to an oncology waiting room. “I was treated like a number,” she recalls. “The phrase I kept hearing was, ‘Sit down and we’ll call you when we’re ready.’ It was all about their process, not my experience.”

Rathman was eventually wheeled into an operating room, strapped to a table, and flipped over, at which point her back was poked full of needles and she realized while staring at the floor that she would be alert for the procedure. “I didn’t ask questions and nobody had told me I would be awake,” she says. “They removed seven inches of flesh. It was excruciating and I could smell flesh burning. All the while, they were playing loud rap music and talking about an upcoming weekend ski trip.”

The only person who mustered any compassion for Rathman as she was wheeled, vomiting, to a recovery area was a nurse who said, “It’s not that bad, honey.” But it was that bad, she thought. And nobody really seemed to care.

“After my recovery I decided I would transition my company,” says Rathman, who had previously worked with authors, even landing some of them on Oprah’s coveted couch. “I was going to immerse myself in healthcare and really get schooled on understanding how it works. I decided my real mission in life was to help healthcare providers understand. I don’t think any of those people woke up and wondered how they could terrify their first patient of the day.”

Related: Rural Healthcare: 5 Things We Learned From Speaking to Patients About Their Options

Rathman says she doesn’t share stories to make people feel bad. “Accountability is so often seen as a punitive measure,” she explains. “We need accountability to be seen as a positive step in ensuring no patient harm.”

As she was transitioning into healthcare advocacy, one of Rathman’s friends opened a day spa in rural Galena, IL. The community was threatening to close the local hospital. “You’d be lucky to get a podiatrist on call,” she says. “A physician shortage had been a problem for two decades. I worked with that hospital and convinced the University of Illinois to do a pilot program and bring physicians out here to moonlight. We took that story to bondholders and got $40 million loan to build a facility.” 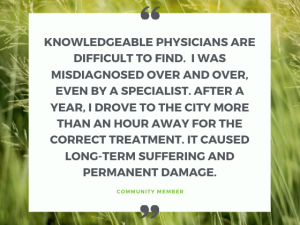 Believe it or not, the people who need the most convincing aren’t necessarily the ones who hand out the big money. “You’d think communities would want hospitals but it’s a hard sell,” says Rathman. “What I’ve found is that if you build it, they don’t necessarily come. We have to get at the root cause of why patients with means are leaving and rural hospitals are left with the awesome and burdensome responsibility to treat either those on Medicaid or underserved or underinsured.”

As a speaker and strategist, Rathman works with hospitals to understand community outreach. “Joe Public doesn’t care about new technology,” she says. “We do a lot of work on culture transformation. We cultivate leadership and a culture of shared excellence. Communication is the focal point.”

That includes storytelling, which is where Rathman shines as an expert. “Rural hospitals have to tell a story. Not about what money will buy — people don’t care about that. They need to tell the story of how the hospital is saving lives. Most hospitals and state offices love to talk about budgets, statistics, FTEs and things like that. I say none of that. None of that makes for a good story.”

“People vote against their own self-interest all the time,” she says. “It’s because they feel it doesn’t affect them. They don’t have enough of an emotional connection to even pay $12 extra a year to fund a hospital. We make storytelling a part of regular community engagement.”

As an example, Rathman tells the story of a farmer who was in the middle of his wheatfield when a 35,000-lb piece of equipment tipped over on him. He had to hope that EMS and LifeFlight would arrive to save him in time. She also tells the story of an ER physician who saved a young couple’s baby.

She is infuriated by the fake stories that pop up on medical advertising billboards all over the Chicago area. “Those are fictitious people,” she says. “I say that’s community betrayal. There are real stories to tell.” 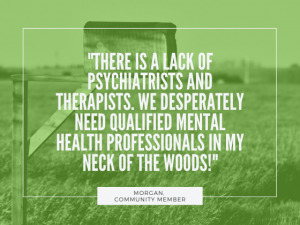 The true story that breaks Rathman’s heart is that rural hospitals are struggling. “There’s a lot of talk and not enough action to save rural hospitals,” she says. “This doesn’t just affect people in rural communities. If you have a heart attack or get in a car accident in a rural area, it could affect you. There’s a real shortage of rural providers.”

Rathman is the first to admit sustainable rural healthcare is a hugely complex issue, which is why she’s devoted her career to helping communities grapple with the ins and outs of it. She travels around the country giving talks, appearing on podcasts, and speaking with hospital staff. Every February, she joins the National Rural Health Association as they head to Washington DC to appear before legislators during its annual Policy Institute.

On Nov. 21, she’ll promote her advocacy and the “Power of Rural” as part of The National Organization of State Offices of Rural Health, National Rural Health Day, held the third Thursday of every November. More than fifty-seven million people live and work in rural communities in this country. Rathman knows she can’t possibly tell all their stories but that won’t stop her from trying.

Have you had experience with a rural hospital? Share your story in the comments below.