What a Pain: How the “Opioid Crisis” Impacts a Migraine Sufferer

It might start with a throb behind your eye. Or maybe you see an aura; a bright spot or some other change in your vision. Perhaps you just get nauseated suddenly. Sometimes bright lights or sounds become all-of-a-sudden intolerable. Migraine headaches are experienced in different ways by people who have them. But one important common trait is pain – in some cases, intolerable pain.

Somewhere between 10 and 15% of American adults experience migraines. They are among the most common cause for work loss and of visits to health care providers. And because the causes of migraine headaches are not fully understood, finding effective treatment can be very difficult for people who have them.

How the Migraines Started for Laurie

Laurie Demit Rusin started experiencing periodic migraines as a teenager in the late 1970’s. Because her father had died at a young age of an aneurism, Laurie was quickly seen by a neurologist to rule out any life-threatening conditions. The final diagnosis: migraine. At that time, there were limited pediatric migraine medications available. Ibuprofen, which had only been on the market for a short time, was the only option that came close to giving her relief. If only that relief had lasted. 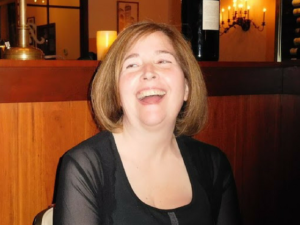 When Laurie was in her mid-30’s, she started experiencing severe and much more frequent migraines. Not only were they happening more often, and more intensely, but they had gotten harder to treat. Thinking they were likely hormonally driven, her primary care provider suggested that Laurie get a hysterectomy. Laurie opted out of that idea. Now that she has gone through menopause, she is glad she made that choice, as she feels it would not have helped – she still has the migraines despite the significant hormonal changes.

Laurie experiences a migraine every day. She rates the pain she gets from them as an 8 on a scale of 1-10. “For me, a migraine is like a hammer on my head,” she told us. “My left eye gets really teary and it feels like I have an ice pick in it.” If the pain goes beyond an 8, then Laurie ends up in the emergency room, where she gets only temporary relief from the narcotics they can give her there. These trips provide no long-term solution – not logistically, not medically and not financially.

To monitor the patterns of her headaches, Laurie tracks them using a smart phone app. This process allows her to follow any patterns that may be occurring and share this information with her health care providers. Unfortunately, even with these data, no one has been able to find a lasting solution, or even make a meaningful dent in reducing Laurie’s headaches. She even had a neurologist say to her one time “There’s nothing more I can do about it.” Needless to say, this statement took a toll on Laurie’s outlook on her future.

When it comes to treatment, Laurie has tried almost everything in the Western medicine book…and even beyond. She recognizes that she is lucky to have insurance that covers many different procedures, devices and practitioners. To date, the list of what Laurie has tested to ease her pain is long:

The list goes on and on. While some of these modalities give her temporary relief, the headaches just keep coming back.

Laurie knows that using prescription pain medication on a long-term basis is not an ideal solution. Not only are they addictive, but they can have both temporary and longer time side effects. But sometimes, they are the only option for her to get a break from her chronic headaches. Because of the recent spotlight on what is being called “The Opioid Crisis”, meaning the rapidly escalating misuse/abuse of the medications on a national level, Laurie has had a harder time getting enough of them to keep her pain managed. To boot, even when she can procure a prescription for them, she must endure her pharmacist making her wait while he calls the prescribing physician to confirm that the prescription is legitimate. One time, a pharmacist even tore up her prescription in front of her because he thought she was “just an addict”. Not only do these events prolong the time to when Laurie can get relief, but they are also dehumanizing and stigmatizing. They make her feel like she is doing something wrong when she is just trying to relieve pain.

For the past 10 years, Laurie has also been trying to qualify for disability benefits. She has had to hire lawyers and tried to make a case for this designation. But twice she has been denied by judges who told her that they think she appears well enough to work. “The judge thought I was just lazy,” she reported.

Laurie’s migraine situation sounds bleak. But somehow, she still manages to find a way to navigate through her life, making sure to take good care of herself through adequate rest and nutrition. Her husband is very supportive and understanding. In fact, she dubs him “a saint”. As a result of her limitations, her children have grown to be very self-sufficient.

For now, Laurie plans to keep using whatever works to manage her pain, even if the benefit is just for a short period of time. She is open to trying new options, too. And finally, she has her eye on a new migraine medication that is projected to come out next year. Though she knows it may not be immediately available to her or may not work for her, she must have something to help her stay hopeful.

Have you been affected by migraines or another health condition? Sign up to share your experiences with Health Stories Project!

One response to “What a Pain: How the “Opioid Crisis” Impacts a Migraine Sufferer”