Getting a Wake-Up Call: Navigating Life with Narcolepsy

We all get sleepy during the day sometimes. A long meeting might lead to heavy eyelids, or a bus ride can bring on a bad case of the yawns. But the neurologic condition called Narcolepsy, which affects about 1 in 2,000 people, leads to far more frequent bouts of daytime sleepiness and other unwanted symptoms including loss of muscle control, temporary paralysis or hallucinations. Currently, there is no cure for narcolepsy, but there are a number of treatment options. 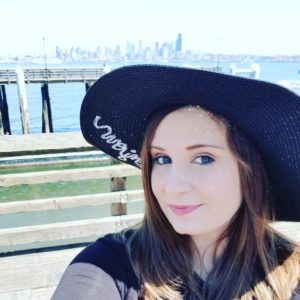 Having narcolepsy can have a dramatic impact on many aspects life, including work or school, personal safety and relationships. Hearing about someone’s own story of being diagnosed with, living with, and being treated for narcolepsy can help others with the condition to navigate and make them feel less alone.

Devon Blevins, a 29-year-old law student who also works full time, agreed to talk to us about her experience with narcolepsy from the time she started noticing symptoms until the present. Devon is a member of the Narcolepsy Network and an advocate for narcolepsy education and support.

Q: When did you first notice symptoms that you now know are caused by narcolepsy?

A: I would say probably shortly before my teen years. I can remember that far back having trouble staying awake in class. I would nap several times during the day. I had very lucid dreams that were severe enough that I sometimes thought people were outside of my window tapping on the glass. I was also very clumsy. I had a reputation for it. I would fall down a lot.

It wasn’t until my early 20’s when I started having symptoms severe enough that I knew something was wrong. I was having migraines. They would last for weeks. And they were very painful. So painful, in fact, that regular pain medication wasn’t taking even the smallest bit of pain away. I was convinced I had a brain tumor. The doctor was convinced there was something seriously wrong. I did two different MRIs to check for tumors and Multiple Sclerosis. When they came back as completely clear, that’s when we started talking about other things. It turns out that those migraines were caused by narcolepsy-related sleep deprivation.

Q: Did you tell anyone when you were diagnosed? How did they react?

A: I told my boyfriend (now husband) and that was just natural. I think he believed I had it before I did. Then I told my parents. There were some people – I wasn’t sure I should tell them or not. There were some friends I didn’t mention it to. There were a lot of things I didn’t know and questions that I couldn’t answer.

The migraines were really impacting my focus. I remember at the time I was having MRIs and the sleep studies – I had every blood test you could think of – I was in this class that was mostly group work based – I felt bad that maybe I wasn’t carrying my own weight. Some of my classmates would even point it out. I didn’t want to feel like it was an excuse. I didn’t want to tell my professors for the same reasons.

Q: How did your husband respond when you found out you had narcolepsy?

A: He was very supportive. I was very emotional at the time. He made an effort to learn about it. He would help me take care of myself. He got more understanding about things I would do that would frustrate him – like falling asleep during a movie or in the car. He became very understanding and compassionate about it.

Q: How did you feel about the diagnosis when you finally got it?

A: I was in denial because of what I had seen in the media – how narcolepsy was portrayed. I almost didn’t go to my sleep study. When I got the results from my sleep study, it was a shock. This is something I will deal with my entire life and that could get worse as I get older.

Q: What do you mean when you talk about how narcolepsy is portrayed in the media?

A: Oh, I’m talking about movies like Mr. Bean’s Rat Race or another movie where someone just falls asleep while bowling and goes all the way down the bowling alley.

Q: How does your narcolepsy medication work for you?

A: The medication wears off. But I can’t take it later in the afternoon or I will have problems sleeping at night. Sometimes I have to cancel plans because I’m not feeling well or am feeling exhausted and sleep-deprived and that affects my relationship with my friends for sure. There are things that are not the smartest things for me to do, such as being out on the water. I know if it gets too late and I get too tired, I feel miserable when I try to push through it, but I can if have to. 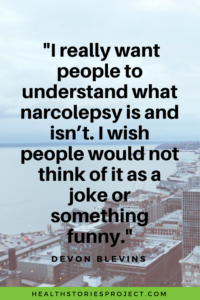 There are certain medications I’m not comfortable with taking. Some of them are addictive and they can have some pretty far-reaching side effects. I know someone who has damaged teeth from them. I would just rather not take anything that serious. It can be hard figuring out which medications are best for your body so trial and error seem to be the way to go, however, nowadays there are testing services (pharmacogenetic) that your doctor can offer to help you figure out which medication works better with your DNA. To learn more about this you can check out websites like clarityxdna.com to see how this can be done for your medication.

Q: What are the greatest challenges you now face from Narcolepsy?

A: Definitely getting medication. There’s also a lot of fear in choosing the right doctor. There are so many stories of people who had to fight for years to get their diagnosis because it is such a misunderstood condition. Having narcolepsy as a diagnosis is extremely important. Without all of the documentation and hoops you have to jump through, you cannot get any of the medications. That’s a big barrier for people.

Q: Do you ever feel like you need to hide the fact that you have narcolepsy?

A: I’m sure there are times that I do feel that way, but I try to make a point to not hide it. I try to be very vocal about it and raise awareness about it. However, I don’t always feel comfortable asking for accommodation. Part of it is denial that I actually need them. I’m in school right now and the classes are pretty long. I’m struggling to stay awake. Not wanting to be a nuisance. Not wanting to feel that I am all that different from anyone else.

Q: Do you personally know any other people with narcolepsy?

A: I don’t. After I got my diagnosis, I found this website called Narcolepsy Network. And I met a lot of people online with narcolepsy. We talked about our experiences that way. It was a huge invaluable resource for me at the time. I don’t participate as much anymore. I participate as much as I can in a big picture way. I pay dues to be a member. I try to attend conferences. Sometimes people will message me about my old posts on the forum. But as time has gone on and my life has gotten busier, I haven’t stayed as active.

Sometimes if I am experiencing something and I am wondering if it is tied to my narcolepsy, or I am looking for a new doctor or considering a new medication, I will go to the forum to look for advice there.

Q: What do you want other people with Narcolepsy to know?

A: I want to tell people with narcolepsy to not be ashamed to talk about it, to use you voices to talk about it and how you are living with it. I also would tell people who are struggling to get the diagnosis to really seek out that online community. I really had no understanding about narcolepsy. Some of those pop-up websites – some of those definitely aren’t super relatable. I wish doctors would hand out information about the Narcolepsy Network.

Q: What do you want people who don’t have narcolepsy to know about the condition?

A: I really want people to understand what narcolepsy is and isn’t. I wish people would not think of it as a joke or something funny. Every time you see something about it in the media, it’s made into something to laugh at. It’s one of those invisible illnesses — it can be really hard on the inside.

Have you been affected by narcolepsy or another health condition? Sign up to share your experiences with Health Stories Project!

One response to “Getting a Wake-Up Call: Navigating Life with Narcolepsy”