Applying for disability wasn’t an easy decision for Erica Carrasco, the migraine blogger behind Achy Smile. She’d been a go-getter her whole life, but had suffered from increasingly severe headaches as an adult that eventually derailed her career. There was nothing left to do but call a lawyer. “When I was a kid, I didn’t dream about having kids and getting married,” says Carrasco, who writes candidly about her life with migraines and has been a migraine. “I wanted a power suit. I was going to wear heels and get a perm.”

A few things changed before her first real job – perms weren’t in style anymore, for starters – but her ambition never faltered. Carrasco climbed the ranks as a government contractor in cybersecurity, traveling extensively and eventually becoming a team leader. She also got married and had kids, and was even featured in Working Mother magazine.

Then, the chronic but manageable migraines she’d had for years became unmanageable, lasting for weeks, sometimes back to back. She saw countless doctors who told her she had Complex Migraines. She tried treatment after treatment. She was diagnosed with several different diseases. Then she found a specialist in Houston whose diagnosis fit.

It turned out that Carrasco suffers from hemiplegic migraines, a rare and serious type of migraine headache that causes excruciating pain and stroke-like symptoms. It got so bad for her that she was hospitalized for lengthy spells. She couldn’t work so she tried going to school, but missed so many classes she had to drop out.

In 2009, after being diagnosed, Carrasco joined the board of the Hemiplegic Migraine Foundation. “It was a made up organization at that point,” she says. “It was only on Facebook but there was nothing else for people with hemiplegic migraines. Now it’s international and has thousands of members.” 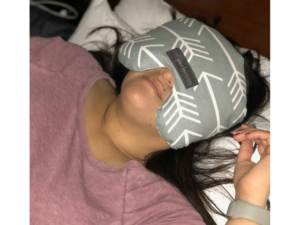 Though she’s no longer involved with the online organization, it was her introduction to the broader migraine community. Last December she started her Achy Smile blog, its name a nod to the familiar feeling of trying to smile through the pain.

“I did it as my personal outlet because I was so stressed,” says Carrasco. “I lost my job, I lost going to school. Everything I had ever worked for, I lost. I was very depressed.”

Blogging became a form of therapy for her. “I was an open book,” she explains. “I have seen so many doctors over the years. I wasn’t afraid to get naked anymore. Anybody can ask me anything and I will give them my perspective. I was just raw at that point.”

She posted a couple of times a month but tapered off. Then she was approached by a patient advocacy organization.

“I joined as an advocate and that gave me the push I needed to get more involved with my blog,” she says. “I started writing more often, and got involved with social media (find her on Twitter, Facebook, and Instagram). I started asking people to share their stories as well.”

Carrasco also got the chance to speak at the Blog Her conference and is hoping to start advocating for migraine awareness on her own as Achy Smile. She’s comfortable discussing what life is like with migraines and is careful about dispensing advice. One thing she does recommend to everyone, though, is therapy.

“I had so many doctors make me feel bad about myself,” she says. “I got terrible advice, was told that I had dark secrets or should divorce my husband. I’d be crying, hyperventilating, and feeling like an awful person.” 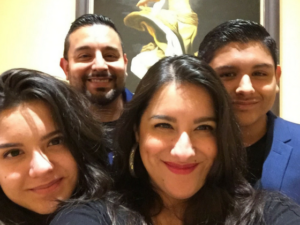 Then, as a last-ditch effort, she saw a therapist. “She told me I wasn’t having migraines because I was stressed or depressed. She said I was stressed and depressed because I have migraines. I realized I should’ve gotten therapy a long time ago. It’s hard to navigate life with a chronic illness.”

Carrasco, who is 38, had to hire a lawyer to help her apply for disability because she’s so young. Her husband, a veteran, is currently back in school so money is tight. She relies on aid to help keep her family afloat, including her daughter, who also suffers from terrible migraines.

“I started the application process a couple of times before, but always felt too devastated to complete the process,” she says. “This time I don’t feel devastated. My migraine advocacy gives me new hope. My old dream has come to an end but now I have something new to look forward to.”

Have you been affected by migraine or another health condition? Sign up to share your experiences with Health Stories Project!