Careful with Kidneys: Sleuthing Out the Symptoms of IgA Nephropathy

IgA Nephropathy is not a common condition. About 1 in 100,000 people in the United States develops this serious kidney condition each year. For unknown reasons, men get it at about twice as often as women, and while it is sometimes found during childhood, it can also fly under a doctor’s radar until a patient has the critical symptoms of actual kidney failure. The cause of IgA nephropathy is not well understood. It might be triggered by a virus or other infection which then alerts the immune system’s effort to chase away such an ‘invasion”. There may also be genetic causes, but researchers are still trying to figure them out.

We interviewed two people to learn about their experiences being diagnosed, treated, and living with igA Nephropathy. Their stories point to important lessons about the health journey of someone with this kidney condition.

When Life Changed on a Dime

Sometime in the mid-1990’s, a health care provider mentioned to Richard that they found blood in his urine. They never recommended that he do anything about it and he chalked it up to the occasional drink he’d share with friends after Wind Ensemble practice. Twenty years later, when he was having gastric discomfort, digestion problems and an aversion to certain food smells, it never occurred to him that these two events could be related. But the two were most likely directly linked to the kidney condition Richard finally learned he had in 2008 called IgA nephropathy, also called Berger’s disease.

Richard’s doctor thought his symptoms in 2008 might be a result of gastric reflux or excessive stomach acid. So, he treated him accordingly. But after three months and trying many different medications, Richard was not getting relief. His doctor asked him to get another blood draw. At 9pm on the night of that blood draw, the laboratory contacted Richard by phone and told him to check himself in to a hospital immediately. While they didn’t know what the cause was, his Creatinine and BUN (blood urea nitrogen) levels were far outside of the normal range, dangerously so.

Richard started to receive IV fluids almost immediately upon arrival at the hospital. But he continued to feel poorly. He was anxious and uncertain as to what was going on. Although the providers knew that the problem was kidney-related, they didn’t have a specific diagnosis. After a few days, they determined that a kidney biopsy (where they took a small tissue sample from his kidney with a special needle), was called for. So, they took this sample. The town where Richard lived and was hospitalized did not, however, have the facilities to test the biopsy tissue. It had to be sent out of state, which extended the wait for a true diagnosis even longer. When the results finally did come in five days from the time he was first admitted to the hospital, they revealed that Richard had end stage kidney disease…his kidneys were failing. The only viable next step to keep him alive for the long term was a kidney transplant.

Richard comes from a large family and family is a high priority for him to this day. The size of his family was particularly handy when he found out that he needed a kidney transplant. Out of all of his siblings, two were perfect matches and one was a “pretty good” match. Approximately 10 months after Richard’s symptoms landed him in the hospital, he received a new kidney from his sister.

During the time that Richard waited for his transplant, he received regular, life-sustaining dialysis treatments. Although he knew that he had kidney failure, it wasn’t until well into that challenging 10 month wait that his transplant coordinator told him what his actual condition was: IgA nephropathy. He had never heard of it before that time.

Richard made a full recovery from his transplant and leads what he considers to be a pretty normal life. He is careful about what he eats and drinks, since he knows he has to take extra good care of his one functioning kidney and his immune system, which is being suppressed with medication to prevent his body from rejecting the donated kidney. And he is aware that his transplanted kidney may not last as long as the rest of him. So, he keeps himself informed about new developments in the realm of nephrology (the study and treatment of kidney disease). He also is active in social media regarding kidney disease, such as kidneybuzz.com and kidneynews.org, to find new information and to provide support to other people who experience kidney failure.

Maureen is a 39-year-old mother, home care giver and jewelry maker living just outside of New York City and who also has IgA Nephropathy. In some ways, her story mimics Richard’s. And in others, it is quite different. Like Richard, she was told many years before her diagnosis that she had red blood cells (and in her case, high levels of protein) in her urine. Also like Richard, she was not told that she needed to follow up on it and, in fact, the health care provider told her that it was basically a variant of normal. 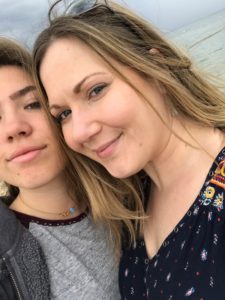 At age 23, Maureen became pregnant with her daughter. During her pregnancy, she experienced pre-eclampsia, high blood pressure which is thought to be caused by pregnancy and thought to resolve after a baby is delivered. Although Maureen’s blood pressure did improve after she had her daughter, a few years later, she developed what was initially thought to be chronic urinary tract infections. She didn’t have the physical symptoms of UTI’s (pain/burning during urination, urinary frequency), but she had high protein, red blood cells and sometimes white blood cells in her urine. And she just didn’t feel well.  Despite being put on multiple rounds of antibiotics, however, her symptoms persisted.

Because Maureen is a trained health care provider herself, she had a feeling that she should see a nephrologist. However, her insurer didn’t allow that to happen until they had determined that the antibiotics weren’t helping her. Three years later, still not being allowed to see a nephrologist (unless she could pay for all expenses out of pocket), Maureen’s health started rapidly declining. She wanted to sleep all the time – she had no energy. She chalked it up to stress and depression. But when her daughter was literally unable to wake her for more than a few seconds before she fell back to sleep, she knew something more serious was wrong. Although Maureen could see a nephrologist that time, she was not told that she had any kidney disease. Instead, she was given an Ace Inhibitor (again, for high blood pressure) and sent home. It wasn’t until her health hit full crisis a few months later, and, like Richard, she had a kidney biopsy, that the seriousness of her health condition was finally recognized significantly diminished kidney function.

Maureen’s kidneys at that point were functioning at about 35%, which resulted in the doctor providing intensive, 8-month steroid treatment as well as different blood pressure medications. About a year after she had hit rock bottom, Maureen started to feel better and was thought to be entering remission. Excited to be feeling better, Maureen took the reins on her health, buying a juicer to make vegetable and fruit concoctions that she felt were healthy and starting a kidney health eating pattern. She continued to experience health complications, such as bone fractures from being on steroids for so long, but her kidneys stayed relatively stable. Unfortunately, in 2016, Maureen started feeling poorly again and this time, was diagnosed with two additional autoimmune diseases, Sjogren’s syndrome and Lupus, making her health management even more complicated than it was before.

Clearly, both Richard and Maureen have found enormous courage and strength despite their health issues. When asked what advice she would give other people with IgA Nephropathy, Maureen’s advice was very similar to Richard’s: ask questions, get informed, join support groups, eat healthily and don’t be afraid to ask your doctor questions.

One response to “Careful with Kidneys: Sleuthing Out the Symptoms of IgA Nephropathy”