You can’t put Charles Mattocks in just one box: actor, award-winning director, chef – he’s embraced a lot of roles in his life. One that’s most important to him personally, though, is his role as a health advocate, for both type 2 diabetes and CRPS (complex regional pain syndrome).

In addition to partnering with the American Diabetes Association to publish a cookbook focused on healthy, budget-friendly, and locally sourced recipes, he’s also made two documentary films so far – check out this gripping trailer for “The Diabetic You,” which is scheduled to be released this year.

We recently spoke with Charles about what drives him and how his health advocacy work has made an impact on those around him.

What has your own experience with diabetes been like?

Well, I was diagnosed eight years ago. I was totally unaware of what diabetes was at the time. That’s pretty bad when a black man in America doesn’t even know about diabetes is in his late thirties.

I noticed I was urinating really frequently one weekend, so I went to a doctor the next week and was diagnosed with type 2 diabetes. The doctor basically just said “I can give you medication” and that was it. No resources, no other advice, nothing.

I knew it wasn’t that simple. I looked in the mirror and thought “I need to look internally and address this from both a physical and emotional perspective.”

After that, I changed my diet and the way I thought about health. It started with me losing 20 pounds, but I’ve really changed my whole outlook on life.

How did you get involved with CRPS (Complex Regional Pain Syndrome)?

My mother has suffered from CRPS (also called RSD, or Reflex Sympathetic Dystrophy) for eight or nine years now. CRPS is one of those diseases where most of the time, the family doesn’t know about it or doesn’t take it seriously. It’s not like when someone tells you they have cancer or a brain tumor.  You may Google it, but that doesn’t give you the full story.

For years, I didn’t really know what she was dealing with until one day I went to see her and she started talking about not wanting to be alive any more. That’s when I said “Whoa!” and knew I wanted to help her the way I help people with diabetes.

Charles went on to make a riveting documentary film about CRPS called “Trial by Fire.” Here’s a preview:

You’re an accomplished actor, but what made you want to start making films?

I’ve always had ideas for films. Being in LA and being in the industry, I was able to make some connections that would allow me to get into filmmaking. It was when I was diagnosed with diabetes that I became inspired to actually put those ideas into action.

How do you help people tell their stories in a way that impacts others?

I just say “tell it from the heart.” I think the people I talk to are in a place where they want to share, where they want to tell their story – they just need their voice to be heard. If you’re a good listener, it will come out the way it’s supposed to. 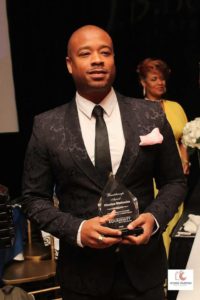 What has the response to your films been like?

Unbelievable. I’ve made friends around the world. I’ve screened films in other countries where people have set up groups about the disease and organized events for us to meet. I’ve met a lot of people with CRPS that have become such good friends, they’re almost become like family.

Where did you get the idea for the RV testing tour?

I was in a Walmart parking lot and saw a Big Red Bus (a mobile blood donation center). I thought “Wow, I could do one for people with diabetes. You know what? I’m going to make it, I’m going to do that.”

I called some companies I knew and said “I’ve got this great idea what do you think?”  And they got on board with it.

It really came from seeing this need from people living with diabetes. Some of them don’t even know they have it, so I wanted to create a way for them to get tested and know their numbers.

Are you working on any new creative projects?

We’re getting ready to shoot the first season of a diabetes reality-docuseries, called “ReverseD,” a first-of-its-kind series produced in partnership with Discovery Life.

It focuses on the emotional and psychological journey of coming to terms with diabetes. Until we’re able to modify people’s behaviors to the point where they want to change their life, it’s hard for them to make physical changes for to their health.

I know people who have had feet and toes amputated and they’re still not taking their disease seriously. We have to try to affect them on mental and emotional level, and give them the tools and education to change their lives and their diet and exercise habits.

ReverseD is scheduled to air in July, 2017, on Discovery Life. You can learn more about Charles and his work at charlesmattocks.com

Have you been affected by diabetes, CRPS, or another health condition? We connect patients and caregivers with opportunities to share their stories. Sign up and help others.