12 TED Talks about health and illness that will inspire, engage, and make you think!

Ideas (and stories) are worth spreading!

If that mantra resonates with you then you probably love TED Talks. For the uninitiated, TED is a nonprofit organization devoted to spreading ideas in the form of powerful talks. They cover a wide range of topics, in hundreds of languages, including talks on medicine, health, scientific research, design and engineering. 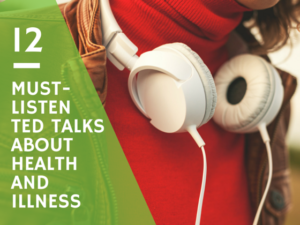 TED has been a powerful platform for amazing minds to share their breakthroughs, insights, and stories for years, and they offer an amazing collection of talks specifically about health and illness. With so many fantastic talks, you could spend days going through them all so we’ve picked 12 of our favorites to get you started…”Enjoy!

Not exactly the first thought most of us would have in the midst of a stroke, right? But, in an astonishing turn of events, brain researcher Jill Bolte Taylor started studying her own brain as she experienced a stroke and she thought those very words! In her TED Talk she explains in detail what it was like to watch her brain functions shut down one by one. If you haven’t already seen it, this powerful TED Talk is a must-watch.

When someone has a “visible” illness it can be easier to understand and offer support. Meals are often prepared, rides to doctor appointments are offered, and hospital rooms look wonderful with flowers and balloons.  But why is that same attention and love rarely extended to those with “invisible” illnesses like bipolar disorder and schizophrenia? In his TED Talk, Max Silverman talks about mental health stigmatization, and the importance of support for all.

Dean Ornish is a leading expert on fighting heart disease with diet and lifestyle change. In this classic TED Talk from 2004. Ornish discusses obesity, diabetes, cancer and “simple, low-tech and low-cost ways to take advantage of the body’s natural desire to heal itself.”

My 12 pairs of legs: Aimee Mullins

If you could acquire any superpower what would it be? Athlete, actor, and activist Aimee Mullins has gained enhanced speed, extraordinary jumping abilities, unabashed beauty and even extra height thanks to her prosthetic legs. In her candid TED Talk, My 12 pairs of legs, Aimee truly redefines what the body, and disability, can be.

Illness is a burden that can limit life and creativity, but what would happen if we started to embrace our limitations?

Phil Hansen was faced with a devastating limitation when a hand tremor threatened his art career. That was until a neurologist suggested he embrace it. In this captivating TED Talk, Phil discusses art, creativity, and transcending limitations by embracing them.

The voices in my head: Eleanor Longden

Eleanor Longden describes in detail the day the voice arrived. Hospitalization and a diagnosis of schizophrenia came next, but her story is not a sad one. Instead, it’s a moving tale about a years-long journey through mental health and a story of survival. Longden taught herself how to deconstruct the messages behind the words in her head and ultimately learned to functionally collaborate with her inner narrator. This TED Talk is a must watch for anyone with mental health issues, as well as caregivers and family members.

[tweet_box design=”default”]Stories are worth spreading! Check out these 12 TED Talks about chronic health conditions from @HealthStories.[/tweet_box]

Dan Buettner and his team studied the world’s “Blue Zones,” communities all over the globe in which people live to record setting ages. In his TED Talk he reviews the results of their study, shares the 9 common diet and lifestyle habits that lead to longer life, and dispels myths about longevity along the way.

The world needs all kinds of minds: Temple Grandin

To put it simply, Temple Grandin is a pretty cool person. Diagnosed with autism as a non-verbal child, she lives with the uncanny ability to see the world differently and to “think in pictures.” In her funny, and insightful TED talk, Temple discusses how her unique mind works, and underscores the importance of educating all types of thinkers.

Poetry can transform subjects that might make people fearful into something entirely new. In 2010, poet Robin Morgan was diagnosed with Parkinson’s and was appalled to discover that women were largely left out of Parkinson’s research trials. In her TED Talk, Robin shares four powerful poems in the hopes that they will help put women with Parkinson’s disease into public and scientific consciousness.

I got 99 problems … palsy is just one: Maysoon Zayid

“I must warn you, I’m not inspirational,” Maysoon Zayid jokes in her hilarious, exhilarating, and (yes!) inspirational TED Talk. With tremendous wit and plenty of sarcasm, the Arab-American comedian gives her audience insights into her life as a stand-up comic, actress, and advocate for those with disabilities like cerebal palsy.

Angelo Merendino married the girl of his dreams, and just 5 short months later she was diagnosed with Breast Cancer. His photo-documentary, The Battle We Didn’t Choose-My Wife’s Fight with Breast Cancer is the basis of this moving (and at times difficult to watch) TED Talk. He says, “These photographs were born out of necessity. I was creating to survive.”

The power of vulnerability: Brene Brown

Brene Brown is a story teller and a researcher. She writes about human connection and her goal to better understand human nature. In her poignant, shareable TED Talk, Brene describes her quest to learn about vulnerability through collecting thousands of stories, and by addressing her own issues with the V word. This talk has plenty of laughs and even more insights. It’s worth a share!

Everyone has a favorite TED Talk. What’s yours?