We’re Sorry, Your Son Has Leukemia

Not Just Another Cold

The first decade of the 21st century was pretty rotten for Chris and her family. They experienced multiple losses of loved ones – some young, some old, none easy. They were also a two-career family with three children under the age of 10. Life was busy. So, when their two-year-old son, Tony, developed frequent upper respiratory and ear infections, they were relatively undaunted. Sure, the trips to the doctor and the antibiotics were a pain. And the clingy toddler whose cough kept everyone up at night fatigued them. But as veteran parents, they also knew that this kind of pattern was normal for kids this age and would eventually settle down.

But it didn’t settle down. After trying multiple rounds of medications, including antibiotics, and only seeing periodic and limited improvement followed by rebounding of worse symptoms, Chris and her husband decided the situation was no longer normal. Soon Tony’s abdomen became severely distended, without explanation, and Chris knew it was time to press the health care providers for more extensive testing. She reflected, “We had no idea what we were dealing with.” 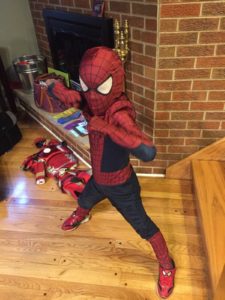 At that point, Tony’s bloodwork came back showing an exceptionally high white cell count, a likely indicator that he had some form of cancer. On December 12, 2009, Tony was admitted to the hospital for 22 consecutive days to begin what would become four years of chemotherapy for T-Cell Acute Lymphocytic Leukemia (ALL).

Tony’s treatment began with the surgical implantation of a port in an artery in his chest. The port would allow for the infusion of chemotherapy and any other necessary medication for battling Tony’s Leukemia.

Explaining the reason for this painful procedure to a 2 ½ year old was extremely difficult. Some procedures even required Chris to restrain Tony, including the time when they discovered that his port became infected. Tony made his dislike of needles (“pokies”) very clear, though he eventually became a veteran at accepting them. He also had to periodically fast (no food or drinks) before certain procedures, which was very tough for a toddler. Chris remembers him coming out of anesthesia after one of these fasts and proclaiming, “I want big chicken!”, a reference to one of his favorite foods.

During his treatment, Tony and his loved ones were on a perpetual roller coaster, trying to tolerate chemotherapy, watching for infections or low cell counts that would cause his treatments to be postponed, having to spontaneously be admitted to the hospital and waiting to see if treatment was working. While he received excellent care, Tony’s parents had to make sure to advocate for his needs – those needs that only parents sometimes recognize.

Tony had two beloved oncologists who shared their practice. One, as Chris described, was like a teddy bear, visiting Tony in the hospital for as long as it took to help him and his family feel cheered and reassured. And the other was soft-spoken, earnest, and incredibly responsive to all of Tony’s parents’ questions and concerns.

Tony’s family and circle of friends is large. When they heard about his diagnosis, many of them kicked into helping mode.

One aunt kept Chris company at the hospital while she stayed with Tony, watching one episode after another of Sponge Bob Square Pants to try to keep Tony distracted. Another friend who had lost a son to cancer was on call to pick up Tony’s siblings when emergencies arose – even in the middle of the night. 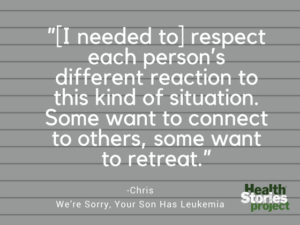 On the flip side, some friend who they expected to jump in to help seemed to almost disappear. In hindsight, Chris now realizes: ”[I needed to] respect each person’s different reaction to this kind of situation. Some want to connect to others, some want to retreat.”

One of Chris’ great challenges as someone who is a helper by nature, was to learn to allow other people to give support and logistical assistance. She overcame (or at least successfully managed), the guilt she experienced when people made food, raised money, or made myriad other gestures to help her family get through such a trying circumstance. As she described it: “Accept help and pay it forward later. Graciously accept. Never forget. And find ways to help others.”

Chris and her husband had to make enormous adjustments to manage Tony’s care. Luckily, both of their employers were understanding about Tony’s illness, and made many accommodations to allow them to maintain their employment while still being able to accompany him to appointments or stay with him in the hospital. Nonetheless, Tony’s parents were forced to make huge changes in almost every aspect of their lives – financial, emotional, parental…the list was endless and hard.

Emerging from the Darkness

Four years after that December day when Tony was first admitted to the hospital, he had his last active treatment for Leukemia. While this landmark was understandably joyful for Tony and his support team, it also started a new chapter of his and his team’s journey.

He moved into a period called “surveillance”, during which he had follow up visits at decreasing frequency, but each with the goal of checking whether the cancer was returning. At age 10, Tony now has these appointments as infrequently as every six months. Although four years have now passed since his last treatment, Chris still finds herself exhausted after each of these visits, exhaling with relief after learning that the cancer has remained at bay. 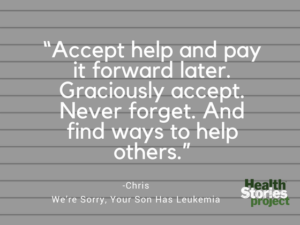 Tony’s parents also have had a lot to do to help his two siblings feel supported, not only about their brother’s illness, but just about the basics of growing up. His older sister developed some very early independence skills out of necessity. His older brother was also incredibly tough and patient during treatment. But once Tony’s active treatment was finished, he understandably needed extensive help getting back to a place of normalcy.

Tony is now a very smiley, active 10-year-old. He has been able to remain at age-appropriate grade level in school despite his four-year treatment and subsequent recovery. He is small in stature, a possible side effect from his chemotherapy (though not proven). His parents and doctors are monitoring his bone growth to determine the best course of action to ensure he reaches a normal adult height without compromising other aspects of his health.

Tony has always been a fan of superheroes. When he saw the first bag of bright green chemotherapy hanging above him in the hospital, he said “Hulk!”. His current favorite books include the Adventures of Captain Underpants. And he never misses an opportunity, whether it’s Halloween or not, to dress up as one of his favorite characters. Though these may be costumes to him, many would say that Tony, his family, and all those people who helped care for them, are superheroes in real life.

Have you been affected by leukemia or another health condition? Sign up to share your experiences with Health Stories Project!