Ashley Green was diagnosed with psoriasis in 1995 at 15 years old, but only recently has she gained enough distance from the disease and its effects to understand how significantly it impacted nearly every facet of her life.

For Ashley, psoriasis first appeared as something that looked like razor rash on her shin. Next came 20-30 red bumps that grew into nickel and dime-sized scaly circles over a period of several weeks. It quickly moved on to her ankles, feet, knuckles, and elbows, and in time would progress to half-dollar size lesions on her buttocks and breasts.

The worst time of year was winter, when her skin would get very dry, itchy, and bright red, or what she calls “angry.” During the summer, she was better able to get it relatively under control, but even that didn’t mean total relief. Although the worst effects temporarily subsided, clothing that left her exposed was still out of the question because of her self-consciousness.

“I never wore shorts, but I could get it to where I wouldn’t bleed under my sheets,” Ashley says. 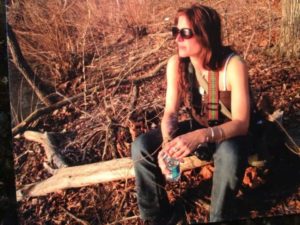 Ashley has consulted with three dermatologists during the course of her treatment. Early on, she struggled to embrace her doctor’s message, feeling she was not being offered any proactive solutions or guidance.

“My first dermatologist’s narrative was “it could be worse, it could be worse,” Ashley explains. “Saying that to a 17, 18-year-old girl, you’re like ‘really!?’ I don’t feel it could be much worse. I immediately regretted going to see that dermatologist and I remember sitting there wishing I had gone to an award winning upper east side dermatologist instead. It’s so important that you feel comfortable with your dermatologist, don’t just settle with someone you’re not happy with!”

Ashley had a fairly consistent treatment regimen on and off for the next 15 years, which began with topical steroids. She also tried using tars, applied to slow the accelerated skin cell growth of psoriasis and make her skin look better. She also underwent both UVA and UVB light treatment. These regimens involved exposing her skin to artificial UV light for a set amount of time on a regular basis and, like the topical products, were intended to stem rapid skin cell growth.

She tried tanning booths, but those weren’t really a viable option because she’d get badly burnt in a matter of seconds. Though her body generally responded positively when treatment began, problems would flare back up the moment she stopped.

“It was a degree of trying to manage it, not really effectively or aggressively treating it,” Ashley explains.

As it does for so many, her turning point came after she hit a major low point in her life. About three years ago, she decided she couldn’t continue living the way she had been.

In her early 30s, Ashley was seeking to finish her Ph.D. dissertation after having worked on it for eight years. Around the same time, she had gotten pregnant and miscarried. While pregnant, her psoriasis had abated somewhat, but during the post-pregnancy estrogen withdrawal, it had gotten worse. She had long struggled for a sense of control over her body, and events during this time only plunged her further into despair.

She vividly remembers the moment she hit rock bottom after three months of grieving and barely leaving her home. On a cold winter night, she sat on the floor in the dark, petting her dog and working on research, feeling isolated and alone. At that moment, she made a conscious choice not to live like that anymore.

Around that time, she saw TV commercials for new psoriasis treatments and was determined to do whatever it took to improve her quality of life. She had spent nearly a decade doing academic research but realized she had never actively done research into new treatments to alleviate her psoriasis. This, too, she attributes to the effects of psoriasis.

“The disease takes away your power, your agency,” Ashley says. “It makes you feel so un-empowered, you shrink. You don’t think of actively pursuing solutions or relief.”

Shortly thereafter, Ashley began seeing a new dermatologist and things began to turn around. No doctor had ever asked Ashley to completely disrobe, but her new dermatologist did. Where previous doctors had looked only at problem areas individually, Ashley actually felt her new dermatologist actually saw the whole picture. I’m so glad we sought after second opinions on her condition, otherwise, we may have been stuck in a rut. I would absolutely recommend always getting a second opinion, or even third opinion from clinics like The Devonshire Clinic and others alike to make sure you’re getting the best treatment possible.

He said “if you trust me and stick with me, I can make this better for you,” Ashley explains. “I had been waiting so long for someone to say that.”

Almost immediately, around 50 percent of her psoriasis effects cleared up with new treatments, most notably a biologic drug. Given by IV or injection, biologics are protein-based drugs derived from living cells. In some cases, psoriasis can be cleared up by trying different treatments that you haven’t used before. Sometimes it can be a trial and error process in finding a method that effectively works for your symptoms. By contacting places similar to this Columbia Dermatology clinic, (Visit Columbia Dermatology’s Website here), or the doctor that Ashley used could help you to start the journey to getting clearer, healthier skin. It’s definitely worth giving it a go if your psoriasis condition is bothering you.

On top of positive changes to Ashley’s health, the new dermatologist had some relieving news for her father.

He’d long had a persistent, dry, scaly spot beneath his eye, and since psoriasis has a genetic component, he believed he was at the root of his daughter’s troubles. He carried the blame for his daughter’s disease and agonized over the closed-off teenager she’d been and unfulfilled woman she’d become. When the dermatologist told Ashley’s father he was not to blame, he shed tears of joyful relief.

Much like those with substance problems or other harmful addictions must go through recovery to get clarity and turn their lives around, Ashley thinks of her progress as her own recovery. She recently obtained her medical records from her teenage years and says distance has given her perspective on how coming of age with psoriasis affected the woman she has become.

“Looking back, I can see much more clearly than how I handle relationships and intimacy is rooted in the way I saw my body,” Ashley says.

Ashley was a late bloomer when it came to sexual intimacy, simply because she didn’t want to be touched. The anxieties many men and women feel while maturing physically and emotionally were amplified for her, and the progression of psoriasis only made things worse.

“Imagine what it would have been like to have a first boyfriend intimately try to touch you and run his fingers over a ‘brillo pad’ on your stomach,” Ashley says. “What must that have been like at 16?”

Even in her thirties, as some of the pain of her teenage years has dissipated and she’s been able to get a better grasp on how psoriasis affected her development, she has remained largely uninvolved romantically. She has had four boyfriends but says she has been ‘not very intimate’ and has been hard on them.

Another element of her relationship with psoriasis, Ashley realizes now, was the effort to take control of things about her body she could control. She began getting tattoos in her mid-teens, as soon as she could find someone who would give them to her. When her back cleared up in her mid-20s, she had the entire area tattooed. Additionally, she has always heavily incorporated jewelry into her personal style.

“I was kind of over-decorating,” Ashley explains. “To make myself feel good about my body and beautify it in a way that was not inherently present.”

Ashley, who has become an active advocate, is glad to have had the opportunity to meet others with psoriasis who can understand what she’s gone through. She still remembers the surge of joy she felt when she attended her first advocacy event two years ago in California. In contrast to her lifelong hesitancy to become close to others, she and her peers with psoriasis connected almost immediately.

“I felt like I’d finally found my tribe,” Ashley recalls. “These are people who know exactly what you’re saying and have real empathy.”

Now 36, Ashley lives in Springfield, Ill., and teaches composition and literature at a community college, where she is also coordinator for the writing center and tutoring facility. For much of the past year, she has been spearheading efforts to expand the program’s curricular offerings to allow students, 80 to 90 percent of whom are small-town, rural whites, greater exposure to diverse global cultures.

These efforts are motivated in part by her own travels. Among other destinations, she has visited Nepal, Tibet, Holland, Belgium, France, and the Dominican Republic. She plans to visit Peru this winter and India next summer. On these lengthy flights and during her free time in general, Ashley is an avid reader.

Even with time, Ashley has not been able to fully transcend the emotional barriers she spent much of her life building up. However, by actively trying to understand herself and how psoriasis has affected her, she’s getting there.

“These aren’t traumas that go away,” Ashley says. “That’s one part we don’t address quite enough, the emotional and psychological ramifications of the disease.”

Still, distance from the period of her life when her symptoms were most severe has allowed for self-discovery. Ashley encourages others dealing with psoriasis to be their own advocates and seek out treatment options, rather than solely relying on doctors.

She adds that even if the effects of her psoriasis were to return tomorrow, she would be grateful for the few years of ‘blue sky’ she’s gotten where she hasn’t had to cover up or pass up social engagements. She hopes that all people with psoriasis are lucky enough to have their own blue sky periods, and that they have the confidence to be proactive in pursuing a better quality of life.

Have you been affected by psoriasis or another health condition? Sign up to share your experiences with Health Stories Project!

Michael is an intern at Health Stories Project. He studied journalism, and values the opportunity to tell the extraordinary stories each of us.
View all posts by Michael Payant →