For newly diagnosed multiple myeloma patients, Peter Sennert represents hope. Peter, 57, was diagnosed with the rare cancerous blood disease 18 years ago and is still going strong. He and his wife, Mary Ellen, now devote themselves to advocating for blood cancer research and helping others cope with the life-changing diagnosis. The couple, who live in Long Island, also share their personal story whenever possible.

Peter, whose wife is a nurse practitioner, went to the doctor when he began getting compression fractures of the spine for no apparent reason. At first, the pair wrote it off as work-related injuries. Peter works as an EMT in New York City, a job with the kind of action that takes its toll on a body. When it kept happening, they sought answers.

“From diagnosis to [treatment] within a matter of six months”

Multiple myeloma causes cancerous plasma cells to attack the bones, leading to pain and making them prone to fractures. It can also affect the immune system, kidneys, and red blood cell count. An oncologist quickly determined that Peter had blood cancer, an unusual disease for a 39-year-old white man. Multiple myeloma is most prevalent among older African-American men and has a five-year survival rate of 50 percent. “I went from diagnosis to stem cell treatment within a matter of six months,” says Peter. 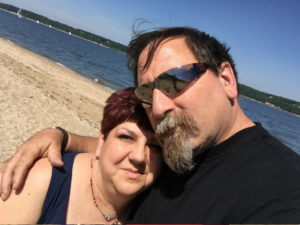 The treatments were very rough on Peter’s body, but the father of four found strength to not just survive, but thrive. As part of various fundraising campaigns, he and Mary Ellen both took up endurance activities. He started doing century bike rides — that’s 100 miles at a time — and she did half-marathons. Peter’s diagnosis also led them to become devoted volunteers for the Leukemia & Lymphoma Society, a non-profit dedicated to fighting blood cancer that was established in 1947.

“We wanted to provide a resource for other people”

“We kept getting involved,” says Mary Ellen. “The Society has a once-a-year night of bringing everyone together, including the newly diagnosed and family members of those who have passed. It happens across the country. We’ve also gotten involved in some other communities and I also was one of the hostesses for a conference in DC. Our kids are involved too.”

The Sennerts are frequent participants in the Leukemia & Lymphoma Society’s First Connection program, which pairs newly diagnosed patients with volunteers who’ve been through the same thing. For patients who are overwhelmed by a diagnosis, the free service can provide comfort and even a bit of hope. The couple also speaks with those who’ve lost loved ones to multiple myeloma. “That’s hard,” says Mary Ellen. “We pray for them and let them know that we are here to support them.”

Join Health Stories Project! Members receive information about our upcoming projects.
“This disease is something that’s had a significant impact on our lives and family,” says Peter. “Multiple myeloma is a rare cancer. It’s scary for people. We faced it very well and we wanted to provide a resource for other people. When somebody tells you that you have cancer, you don’t know where to turn next.”

“Reach out to organizations that support you.”

Not everybody diagnosed with multiple myeloma is as lucky as Peter. His wife is a nurse practitioner, he has excellent health insurance through his job with the fire department from which he recently retired, and his body has kept the disease at bay with the help of a couple of intensive stem-cell treatments and other medications. “The psychological component is one of the hardest parts of the cancer,” he says. “I have great coverage so I don’t have to worry about a mountain of bills. One infusion is about $42,000 and the treatment runs for about 32 infusions.” 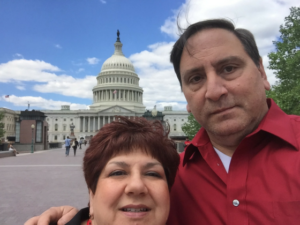 His advice to the newly diagnosed is simple. “Investigate treatments that are available, don’t look at it as a death sentence when you read some of the stuff, and reach out to organizations that support you.”

For Peter, giving back has been a boost to his well-being. “I have an intrinsic need to help people,” he says. “Sometimes it gets in the way, and sometimes I get in the way. But like Mary Ellen says, I’m the longevity study. Sometimes I don’t even need to say anything other than that 20 years after my diagnosis I’m still in relatively good health.”

Have you been affected by Multiple Myeloma or another health condition? Sign up to share your experiences with Health Stories Project!