What would it take for you to transform one of your most excruciating losses into something that will benefit generations to come?

For many of us that question may be too abstract to focus in on. But for Kristine Wetzel transforming her loss became a new mission. A teacher and mother based in Huntington Beach, California, Kristine’s world was shaken to its core in 2011 when her daughter, McKenna, lost her battle to a brain tumor at the age of seven. 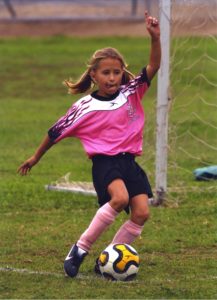 Kristine’s nightmare started just six months prior, when McKenna came down with what she thought was the stomach flu. But McKenna continued to throw up, quite violently at times, for over a week. Then, her left eye started to wander.

After their third trip to the doctor’s office in a week, McKenna was sent for CT and MRI scans, which confirmed her diagnosis of diffuse intrinsic pontine glioma (DIPG), an aggressive brain tumor. Kristine and her husband, Dave, were told the typical prognosis was nine to eighteen months. Unmoved, they dove into research, evaluating various institutions and their skills and capacities for tackling this disease. Soon, however, reality set in: there is no cure. Within a week of her diagnosis, McKenna’s health declined rapidly. McKenna’s doctors fast tracked her enrollment into a clinical trial, and her parents sought out other treatment centers, however, due to the level of tumor advancement, Kristine and Dave were told it might be best to keep her home near her family and community.

A Love for Life

Through all the trials and tribulations of treatment, McKenna exemplified the definition of grace. While she bore through the tough times with a stoic courage, she never lost her sense of humor or joy. When the talented soccer player was told she had to cut down on her level of physical activity, she took it as a challenge to learn new tricks, including playing the guitar, singing, and drawing. 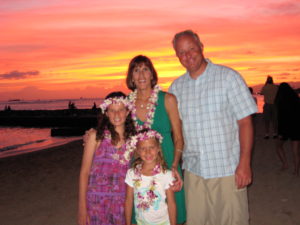 The Wetzels on a family trip to Hawaii

Amid the routine of various appointments and testing, McKenna continued to enjoy and excel at school, receiving advanced rankings on standardized tests. On top of that, her sister, Jordan, and best friend, Sophie, made sure her social calendar was always full.

The Wetzels knew time with McKenna was precious and limited, and therefore they planned to not waste a second of it. With McKenna and her sister Jordan in tow they traveled to Hawaii, the mountains, the desert and Las Vegas. Thanks to their generous friends, McKenna was able to go to tapings of American Idol, Dancing with the Stars, and sat on the floor at a Lakers game. While she was lucky enough to feel like a super star, even in those brief moments, she would have gladly given it all up to be able to run again, to, as she put it, “get rid of that stupid tumor.”

In July of 2011, surrounded by her family and friends, McKenna took her last breath. She lost her battle exactly six months from her initial diagnosis, two weeks shy of her eighth birthday.

The loss started a period of unimaginable pain for McKenna’s family and, for a while, everything seemed bleak. In these moments McKenna’s mother Kristine called upon McKenna’s impenetrable spirit and her inability to dwell on the negatives of life. It was this fortitude that opened the door to the possibility of coping with their loss.

Prior to McKenna’s passing, a group of family and friends had thrown a party, with an aim to fundraise for McKenna’s continued treatment. Now, with no need for such funds, the group found themselves with seed money. Initially, Kristine and her crew decided to donate locally, and sent 50 ukuleles in McKenna’s honor to her school’s music program. But then, their aim shifted towards the future. What if something was done ten years ago that could have altered McKenna’s treatment, they wondered? What if research had provided alternates to the current standard of treatment? Suddenly their goal became remarkably clear.

A Drive for a Cure

Kristine and Dave Wenzel, motivated by the desire to honor McKenna’s legacy and to perpetuate the sense of community that lifted their family during their darkest time, started the McKenna Claire Foundation in 2011. Starting humbly at a grassroots level, gracious and talented friends and family served as the original board. This engagement and enthusiasm has proved to have a ripple effect. The McKenna Claire Foundation has since grown to be a recognizable name in southern California cancer philanthropy. 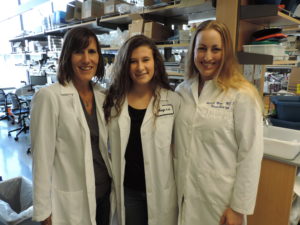 Since its founding in July 2011, the McKenna Claire Foundation for Pediatric Brain Cancer has engaged multiple researchers, including those involved with clinical trial design, and participated in numerous outreach and education initiatives. Research is a main focus, and the Wetzels have committed to partnering with researchers and medical institutions to support growth for new trials and treatments. Following McKenna’s death, the Wetzels arranged for her brain tumor tissue, along with her brain and spinal cord, to be donated to the Monje Lab at Stanford University. Since then Dr. Monje has been a partner of the foundation, working with the Wetzels to expand treatment options available for families. Other researchers who are on the cutting edge of pediatric brain cancer and DIPG research have since partnered with the foundation as well.

While research is pivotal to ensure hope for better treatments coming down the pipeline, Kristine and her team know that building awareness is key to funding that research. To that end, the McKenna Claire Foundation dove straight into social media campaigns and community engagement projects, big and small. Whether it’s sharing McKenna’s story at a local school, partnering with other foundations such as St. Baldricks, or participating in pharmaceutical advisory boards, Kristine has committed her life to doing what she can to make sure that the fight to cure pediatric cancer doesn’t end.

A Place of Support

One of the more profound moments Kristine encounters in her role is answering the question many other parents who have just lost a child so often ask: does it ever get better? Kristine answers definitively: yes and no. 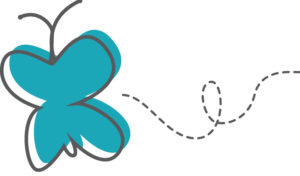 McKenna, a lover of all things turquoise and butterflies, loved making art. Her own drawings of butterflies directly inspired the little turquoise butterfly in foundation’s logo.

You learn how to deal with it better, she notes, but when the weight of the loss hits you, and you go back to that moment, the grief can feel brand new again. Be gentle with yourself is a common Kristine directive. “What you did three days ago to deal with your grief might be very different than what you did three months ago, and that’s okay,” Kristine admits. “Give yourself the ability to not subscribe to a template of healing. You will laugh and you will break down a million times over in the course of recovering from the loss.”

For Kristine, learning to be okay with being sad has proven to be a difficult but important challenge. It’s embracing the realness of grief, and not attempting to generate false feelings or emotions, that has helped allow Kristine to remain resolute and earnest in her endeavors. 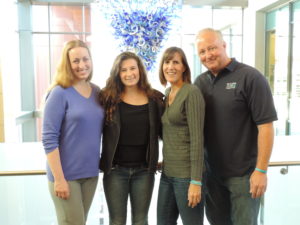 The Wetzels at Dr. Monje’s lab

Today, Kristine and Dave are as steadfast as ever. They are grateful that their foundation, in addition to supporting efforts to mobilize others to pave the path for a cure, allow them to celebrate McKenna’s passion for life every day. “McKenna was a vibrant girl who loved life. Her joy was contagious and her heart was huge,” Kristine beams.  Through the foundation set up in her honor, McKenna’s impact on the world is now boundless.

A Way to Support

To learn more about the McKenna Claire Foundation, how you can support the effort to cure pediatric brain cancers, and to stay informed on events, research, and how you can get involved, please visit mckennaclairfoundation.org.

Have you been affected by pediatric brain cancer or another health condition? Share your experiences with Health Stories Project.