During the month of May NAMI, Mental Health America, and similar organizations across America team up to bring awareness to mental health illnesses such as depression, schizophrenia, and bipolar disorder. While mental health issues are important to discuss year round, during this month individuals with mental health experience are encouraged to speak up, educate the public, advocate for equal care and fight together to end stigma.

This year’s theme for Mental Health Month is Life with a Mental Illness so, in support of the theme, we decided to call on individuals within our community and on social media to share what life with bipolar disorder feels like for them. 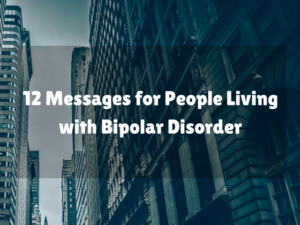 Q: What do you wish your friends and family understood about bipolar disorder?

A: “Being bipolar can be a very private struggle. When I am in manic states, I can make some very bad decisions, but I generally find that I am able to rationalize those decisions so well that most people don’t even know that something big is going on inside of me. On the flip side, when I am in a depressed state I try to overcompensate, especially at work. 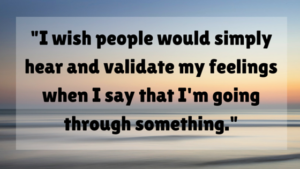 I might seem extra happy, but my smile is hiding real pain. Since I’ve shared with friends and family that I have bipolar, some people don’t even believe me. I wish people would simply hear and validate my feelings when I say that I’m going through something. My dad keeps telling me, ‘You’re too smart to have bipolar!’ I was blessed to have some measure of intelligence, but that has nothing to do with my emotional self. People with bipolar can have numerous gifts and be very accomplished in many things and still struggle. ” – Anon

A: “Each day we fight hard to become healthier, not only for ourselves, but for them as well.” – Laura, Our Bipolar Family 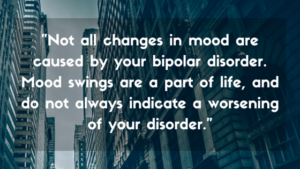 A: “Bipolar disorder is as much a disease as are diabetes and heart disease, and that it can, and must, be treated by a professional. However, those around you must realize that part of the treatment involves taking care of yourself physically and emotionally. Personal wellness is so crucial for those living with mental health issues like this one. It’s so important to take care of yourself. Some people suffering from this illness have found that using kratom powder strains has been useful for them to increase their energy or help themselves to feel more relaxed. Perhaps more people might want to check out organakratom.com to see if any of their strains could help individuals struggling with bipolar disorders.

Also, not all changes in mood are caused by your bipolar disorder. Mood swings are a part of life, and do not always indicate a worsening of your disorder. ” – Anon

A: “We are not our diagnosis. Bipolar disorder is a brain disorder and we aren’t doing it on purpose. Managing bipolar is tough and we are trying, but there’s no need to treat us any differently than you did pre-diagnosis.” – Anon

Q: What is a myth about bipolar disorder that people should stop believing?

A: One myth is that Bipolar disorder and depression can be overcome by ‘pulling yourself up by your bootstraps,’ and that bipolar disorder means that you have two different personalities. The term ‘bipolar’ is too often used casually when someone’s mood changes frequently. Bipolar disorder is a serious brain condition and should be treated as such.” – Anon 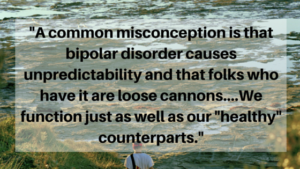 A: “[Some people think] we can’t be productive members of society.” – Laura, Our Bipolar Family

A: “Bipolar is not ‘crazy’ or ‘lazy‘… No one would call you lazy if you were sick – that’s exactly why it’s called mental ‘illness.’ It’s not a character defect. Furthermore, with bipolar, there are times, more often than not, that my mood stabilizes – especially with the aid of medication and counseling – and in those times, I am the ‘real’ me – not crazy or lazy – just regular.” – Anon

A: “A myth that people should stop believing is that people who suffer from it can’t possibly lead normal and productive lives. A common misconception is that bipolar disorder causes unpredictability and that folks who have it are loose cannons. Sure, there are manic episodes and exceptions, but most of us go long stretches without incident. When managed, it’s actually pretty easy to predict cycle changes and figure out when you’re above or below baseline. We function just as well as our ‘healthy’ counterparts. People are very unclear on the definition of hypomania, which again can be dangerous left unchecked, but can be of great value when managed.” – Anon

Q: What message would you give someone with bipolar disorder who is feeling hopeless?

A: “Keep looking for help. Reach out, wherever you need to reach out to. When I finally got help, it was through the mental health department of the county that I was living in. I called and told them that I was feeling suicidal and I felt like I couldn’t trust myself. My caseworker called the next day to tell me that a bed had opened in a crisis stabilization unit, where I got medications to even me out. It was also the first time I got a definitive diagnosis. I spent more than a decade struggling alone before I finally got the help I needed. Before that I got counseling, called suicide hotlines numerous times and looked for support in family and friends. If I hadn’t kept reaching out, I don’t know where I’d be. 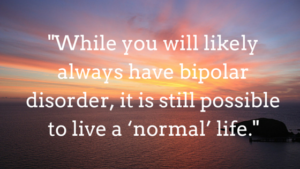 Also – find one person. All you need is one other person who values you, who cares for you. For me it’s my sister, and when I felt the lowest of low, I would force myself to think of how she would feel if I did something permanent. It only takes one connection to remind you that your existence matters – even if it feels like it doesn’t. ” – Anon

A: “There IS hope, through professional treatment, including medication and therapy. While you will likely always have bipolar disorder, it is still possible to live a ‘normal’ life. ” – Anon

A: “It gets better. Don’t be afraid to ask for help because you’re worried about their judgment. That help will work wonders if you take an active approach to recovery. Let yourself rest until you have the strength to do that, but don’t give up. Six months from now your life will be so different. My own suicide attempt was the result of that hopelessness, but there were complete strangers out there who moved heaven and earth to get me better. There are good people and we care and we want you to know that you matter. ” – Anon

A: “Tomorrow is a new day” – Laura, Our Bipolar Family

Have you been affected by bipolar or another health condition? Sign up to share your experiences with Health Stories Project!

Author’s note: Some answers have been edited and shortened. These answers are based on personal experience and shouldn’t be taken as professional medical advice.

One response to “12 Messages for People Living with Bipolar Disorder”