“Your son has achondroplasia.”

When Heather Wahl Saylor went into labor in 1993, she had no idea that she was giving birth to a child with achondroplasia, a common form of dwarfism. In fact, it wasn’t until the hospital staff handed her the March of Dimes’ information sheet on the condition the next day that she knew that her son, Ben, had it. 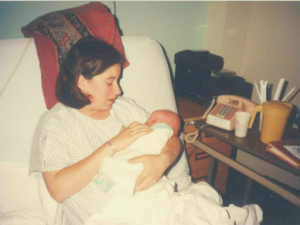 “It was a different time then”, Saylor reflects. The gene for the condition had not yet been identified and what could be detected on ultrasound was more limited than it is now with technology like 3D imaging. While that information sheet Heather was given was well intended, it also profoundly scared her. The words printed in the form included the statement “Death in the first year is not uncommon”.

By the time he was just six months old, Ben had his third brain surgery. He was among the unlucky small proportion of people with achondroplasia to have hydrocephalus, the retention of fluid in the brain’s ventricles. To remedy this situation, he had a shunt placed inside his brain to allow for drainage.

He also had a major surgery called a “foramen magnum decompression” to make more room in the passage where the spinal cord enters the skull. This surgery may very well have prevented Ben from being one of those terrifying statistics cited in the brochure Heather got in the hospital when Ben was born.

At 18 months of age, Ben’s speech was severely delayed because of fluid retention in his ears, another fairly common side effect of achondroplasia. This condition was only detected because Ben had yet another surgery to remove his tonsils and adenoids with the goal of improving the sleep apnea he was experiencing. Ben subsequently experienced multiple complications from his shunt, resulting in frequent trips to the emergency and operating rooms. By age 10, Ben had experienced close to 30 surgeries for side effects from his condition.

In addition to Ben’s health challenges from achondroplasia, Heather realized that she needed to address the social complications that he, and in fact their whole family, would face as a result of him being “a little person”. Five days after Ben was born and released from the hospital, Heather connected with another family who had a child with achondroplasia. Heather described that this family became her “lifeline” as a new parent. They introduced Heather and her family to Little People of America, a national organization whose mission is to help support people of smaller-than-average stature. When Heather and family moved to Chicago four years later, LPA was one of the first organizations that Heather and her family connected with to help their transition to living in a new place.

As Ben became aware that his stature was quite different than most people around him, Heather worked very closely with him to help him understand why people might stare or point because of how he looked and how to react when that happened. “Kids my age were very aware of it [my appearance] and very vocal about their awareness”, Ben shared. “My parents would tell me how to act around people or just tell me to calm down. There were times my parents would say ‘let it go’, and they would encourage me to educate people about it, or let it go, but not fight”. Heather also received premium advice from a geneticist with whom she and Ben had met after Ben was born. He said “Don’t be angry or cry when people approach you because Ben will internalize that and it will affect how he sees himself.”

Along Comes a Brother 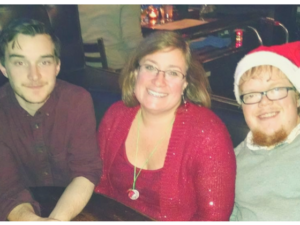 Just sixteen months after Ben arrived, his brother Tim, who is of average stature, was born. Although Ben’s parents were busy managing a toddler, let alone one with dwarfism, they also wanted to make sure that Ben had a sibling close enough in age to be a play mate.

Heather frankly worried that Ben might have trouble making friends because of his stature. Luckily, their worry never came to fruition. Nonetheless, Ben is grateful for his brother Tim. Both Tim and Ben experienced some frustrations growing up because of their difference in height. For example, Ben found it annoying that his younger brother was first to reach the acceptable height threshold for going on certain rides at the amusement park. And for Tim, being the brother of someone who received so many kudos for his every milestone and achievement caused periodic annoyance and jealousy. In the end, they recognized that there was no changing either of their situations, so they adapted accordingly and sallied forth.

Once Ben was school age, Heather worked with Ben’s school to make sure he had what he needed to accommodate his height. Although the Americans with Disabilities Act ensured a variety of facility adjustments for people with limited physical abilities, such as ramps for wheelchairs, there was not much thought given to what kind of changes should be made for little people.

For example, washroom needs for small people were neglected. It could be possible that at home Heather might have installed a special needs toilet from companies like Practical Bathing to help Ben with toileting. But at school it was quite difficult to cope with the situation. In fact, some of the ADA adjustments, such as higher toilet seats to support easier transfer for people who use wheelchairs, made doing something as important as going to the bathroom harder for little people. Heather requested a lower coat hook so Ben could hang things up. And she also made sure that there was a stool available for Ben whenever possible.

When he was in high school, the school’s physical therapist created a customized cushion for Ben that he could carry between classrooms and that would make sitting in desks made for average stature people easier and more comfortable for him. Sitting at a school desk with legs dangling in the air caused Ben’s feet to fall asleep. His cushion remedied that situation by allowing for his previously dangling legs to bend.

When Ben wanted to learn to drive, Heather discovered that he could not do so through the high school’s regular program for insurance and liability reasons. So, Heather found a physical rehabilitation facility that allowed for use of the pedal adaptations Ben needed to operate their vehicles.

As a teenager, Ben decided to take up stage acting. He joined a disability education acting program called Tellin’ Tales Theater. He also got involved in their disabilities mentorship program so he could help someone younger than him navigate life with a disability. Ben also learned how to play with devil sticks, a kind of juggling sticks that require passing one stick in the air between two held in the hands. He liked to show his skills with the devil sticks in parks and at social gatherings. While being stared at as a little person felt uncomfortable in many circumstances, performing in front of others was a way that Ben could feel positive about people watching him.

Becoming an Adult with Dwarfism 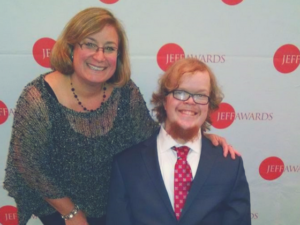 Feeling different remained a theme for Ben as he emerged from high school. Not only was he a little person with red hair (which, for some reason, sometimes gets stigmatized among children), but Ben realized that he was gay. Ben’s parents were very supportive about every aspect of who he was (and is), but the reactions from some people have been less informed and understanding. One time, when he told someone he was gay, they responded, “Oh, you’re gay and a dwarf? I didn’t know you could be both.” Another person asked “If you were to be attracted to an average stature person, would that be considered a fetish?” Although these kinds of comments can still sting a bit for Ben, he has developed a way to effectively deal with them without being hostile to others and without them creating deep internal wounds.

Ben is now 24 years old and a thriving adult. He graduated from DePaul University with a major in relational communications and minors in creative writing and LGBT studies. He has a full-time job, an active social life and remains involved in Little People of America. When separately asked what Ben and Heather would like others to know and better understand about people with dwarfism, they gave almost verbatim answers: People with dwarfism are people first. Dwarfism is only one of the many characteristics that make up who they are.

Have you been affected by dwarfism or another health condition? Sign up to share your experiences with Health Stories Project!