Positive: One Man’s Experience with HIV and COVID-19

For Art, who was diagnosed with HIV in January 1989, watching the COVID-19 pandemic unfold has been reminiscent of his experience living through the AIDS epidemic that ravaged the US in the 1980s and 1990s. “I grew up in the epicenter of HIV for black people. I got to see how it impacted many families – the stigma in black church, the bias, the fear.”

When he tested positive for coronavirus in March 2020, many of the same feelings resurfaced. “It brought up all of that – all the death [and] all the fear,” he said, remembering how many of his friends passed. 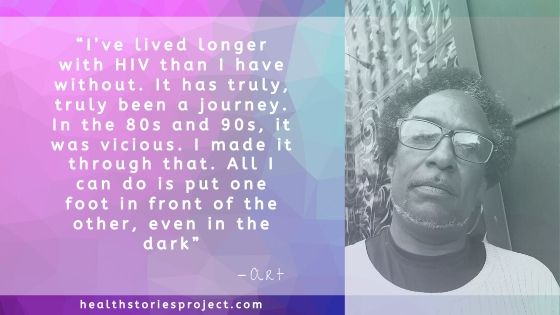 “Mentally, it took everything in my power not to go into a really dark place.”

Art was at the end of his self-imposed quarantine after being exposed to someone suspected to have COVID-19 at work when his friend Nikki paid him a visit at home. That night, Art later learned, Nikki became “violently sick” at home and remained ill for the next week. She suspected, based on her symptoms, that she had the coronavirus.

Related:  9 Messages of Hope and Caring from People who are #HighRiskCovid19

Eight days after seeing Nikki, Art noticed he had lost his sense of taste. “I was eating food, but it tasted metallic,” he said. Then, he began to get headaches and feel congested in his chest. Though he didn’t have a fever, he knew something was wrong and immediately went to his doctor.

He told his doctor about his symptoms and about Nikki and her symptoms. His doctor had access to some coronavirus tests through an association with the local university hospital and was able to order one for Art. “[The nose swab] hurts like crazy,” Art said. However, after taking the test, there was nothing for him to do but go home and monitor his symptoms until the results came back.

Three days after receiving the test, his headache was worse, and his energy was dwindling. He still hadn’t regained his sense of taste.

“I thought, ‘This is crazy. I’ve had the flu; I get the flu shot. Something is wrong here.’”

Almost a week after being tested for coronavirus, his test results came back positive. He wasn’t surprised; Nikki had received her test a few days before he had, and she had also tested positive.

Art’s doctors offered to admit him to the hospital, but he was strongly opposed to the idea. “The last case scenario was me going to the hospital,” he said. He had seen enough news stories of COVID-19 patients succumbing to the disease after being hospitalized. He was concerned about the national shortage of ventilators and the decisions doctors would be forced to make when triaging patients. He knew the disadvantages that people of color – black people in particular – faced when seeking healthcare under normal circumstances and knew they would be worse during a pandemic.

Though he was undeniably sick, Art felt he could manage his symptoms himself at home. His doctors implemented TeleMed to keep an eye on him and virtually checked in on him every six hours. The next day, a Thursday, “that’s when it hit.” 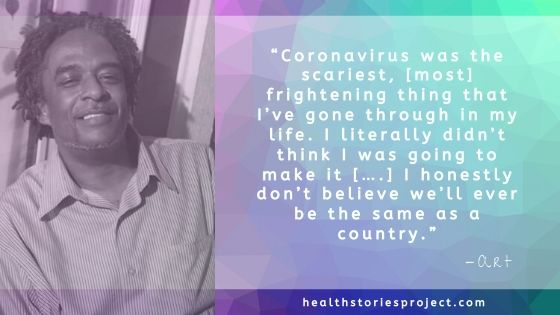 While he didn’t feel well during the day, that paled in comparison to how he felt in the evening and through the night. “The way it worked with me was about 8 p.m. every night, I would start to get hot,” he said. He never ran a fever, but his “body would start to get hot.” About an hour after those symptoms began, he would feel a headache set in and his chest would hurt.

“I couldn’t sleep,” he said. “If I had laid down – I wanted to – I honestly don’t believe I would’ve gotten back up. When I laid down on my back, it felt like my lungs would just fill up […] I had to sit in my recliner every night with a blanket, drinking hot tea.”

Art relocated his recliner from his living room to his bedroom because sitting up at an angle seemed to be the only way he could avoid the sensation of fluid filling his lungs.

These symptoms recurred like clockwork every night around 8 for the next week. Instead of sleeping, Art spent his nights alternating between drinking tea and coughing up phlegm. In addition to taking Mucinex, azithromycin, and vitamins, he tried various home remedies, such as inhaling the steam from boiled lemon and orange peels. “That helped open up my lungs and break up the phlegm.”

Editors Note: If you think you may have COVID-19 or another medical emergency, call your doctor, go to the emergency department, or call 911 immediately. Health Stories Project does not recommend or endorse any specific tests, physicians, products, procedures, opinions, or other information.

Since he couldn’t sleep at night, Art tried to get his rest during the day and take it easy. He did his best to clean and sanitize as much as he could with the little energy he had. He also made sure to walk back and forth in his apartment every day. “Just to exercise my legs, but also my lungs and my mind,” he said.

“I did a lot of talking, a lot of writing. Just trying to be still. Coronavirus helped me to refocus.”

Beyond his physical health, COVID-19 impacted Art financially. He could no longer work after interacting with someone suspected to have the virus at his job in early March. With state Department of Labor offices overwhelmed nationwide, it took Art 10 days to receive unemployment benefits. He was still waiting on the unemployment insurance in mid-April. “I’m running out of food. I have no money,” he said. “I’ve over-drafted my bank account. [COVID-19 has] impacted everything.”

He credits the support of his family, friends, and healthcare team with helping him through the harrowing experience of battling COVID-19. “I have a circle of people in my life – family – who are awesome, who loved me through it, who talked me through it, [and] wouldn’t let me get down,” he said. “Words can’t explain how valuable they were. They ordered food for me. It was the love that guided me through it. That was my saving grace.”

After about a week of struggling, Art’s symptoms finally began to dissipate. He was eventually able to sleep at night, though he still experienced headaches and had yet to regain his sense of taste. The congestion in his chest also persisted, but his doctors were cautiously optimistic that he would recover. “[My doctors] believe I’m on the other side, but they don’t know,” Art said. “They’re not saying I’m cured. We’re just taking it a day at a time.”

Art emphasized the importance of social distancing and following the direction of public health experts. “Stay home. Isolate. Listen to the scientists; they’re telling you how not to get [COVID-19]. Wear a mask if you go out. Do the things you need to do to stay healthy.”

Art regarded his battle with coronavirus the same way he faced his HIV diagnosis in 1989. “I’m a fighter. I’m a survivor,” he said.

In fact, his experience living through the AIDS epidemic 30 years ago gave him the perspective he needed to overcome COVID-19. “I’ve lived longer with HIV than I have without. It has truly, truly been a journey. In the 80s and 90s, it was vicious. I made it through that. All I can do is put one foot in front of the other, even in the dark,” he said. “Coronavirus was the scariest, [most] frightening thing that I’ve gone through in my life. I literally didn’t think I was going to make it [….] I honestly don’t believe we’ll ever be the same as far as a country.”

Join us in thanking Art in the comments below for sharing his COVID-19 story.

Have you been affected by COVID-19, HIV, or another health condition? Learn more about sharing your story by clicking here.

Regina is a Story Manager for Reverba. She is fairly certain she holds a Bachelor of Arts degree in Economics and French from McGill University, but her diploma was written entirely in Latin, so she can't be sure. In her spare time, she enjoys reading, scrapbooking, practicing aerial yoga, and traveling.
View all posts by Regina Wung →

7 responses to “Positive: One Man’s Experience with HIV and COVID-19”