“Hell and Back”: A Mother’s View of Her Young Son’s Life with SJIA

In January 2012, Kristen’s youngest of three children, Rylan, suddenly became very sick. Their trying path to a diagnosis for the then-one-year-old was just the beginning of a new and continuously challenging experience — which Rylan and his family have persevered as a loving team. Here Kristen shares how his life with systemic-onset juvenile idiopathic arthritis (SJIA) has impacted them all, from surgeries to anxiety to greater solidarity.

“Not Any Old Everyday Sickness”

When Rylan was only 14 months old, out of nowhere he became deathly ill. I brought him to his doctor’s office but his primary care doctor was on vacation, so he was seen by the doctor on call. After I explained everything [that was] going on and all of his symptoms, I felt very deeply that this was not any old everyday sickness. [I felt it was] very dangerous and life-threatening, but of course I’m just the mother, so I don’t know much of anything. 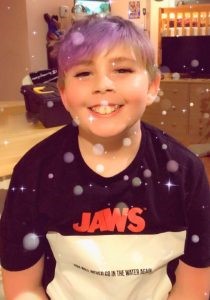 Basically, the doctor shrugged everything off and stated that [Rylan] most likely only had a severe virus and after about a week he should be fine. I listened to my feelings and  demanded she at least take some bloodwork from him, which she did. And she sent us on our way.

But the next day, he wasn’t any better and was getting much worse by the hour. I grew extremely concerned, went to the doctor’s office and demanded to have him seen by his primary care doctor. Now! No excuses!

After [the doctor] looked [Rylan] over carefully and sent him for extensive blood testing, he [told] me that had I not taken such an initiative and listened to my feelings, [Rylan] would have probably died! He said I had literally saved my son’s life! [The doctor] called the top children’s hospital in Boston and spoke to a doctor there. They said I had to get him to Boston right now.

I left the doctor’s office and headed to a car rental agency because our car had died two days before. After almost two hours of traveling and having to drive about 25-30 mph because of [a] snow [storm], [my husband and I] arrived at the hospital. As soon as we walked in, they took my son and began to assess him.

Waiting for Diagnosis, Struggling for Composure

I was so extremely beyond scared to death for my poor little baby boy, extremely nervous about what it could possibly be and what could possibly happen to him and what he may have to be put through. I was crying uncontrollably and talking out loud to God, asking him to please help my baby and help me gain the strength to be a supportive mother only and to put my feelings and fears aside, because it was all about him! I tried my hardest to be as calm as possible so he wouldn’t start to worry or freak out. I was able to do it all.

[Rylan] was the calmest and somewhat happy baby he normally was. The doctors were all shocked. They were also very impressed by my demeanor and how I was able to control my emotions so well during the scariest time of our lives.

[Rylan] was admitted into the hospital for the next week and placed on extremely high doses of about 10 different medications, including chemotherapy.

Finally, he was diagnosed with systemic-onset juvenile idiopathic arthritis with splenomegaly [enlarged spleen]. Definitely a very rare and life-threatening disease, especially at his young age. He will have to suffer for the rest of his life and will always be on many very strong medications, possibly chemotherapy as well.

Years of Battling, Adjustment and Learning

His diagnosis and somewhat bleak prognosis … changed our entire family in an instant! We now had a severely ill child that needed constant care. We’ve learned how to deal and cope over the years, but it’s definitely not an easy thing for any of us in the family.

[Rylan] has been through hell and back so many times, it’s too many to count! He suffers every day and in turn, our family suffers along with him. But his two older brothers are very helpful and supportive of him and they always try to cheer him up when he’s really down and not feeling like himself.

[Rylan] has already undergone three surgeries and he’s only 11 years old. He had his left knee completely replaced when he was only five years old! He will have to go for another surgery in about two years to replace his right knee and also both of his hips. Basically, this is an ongoing battle every day for him.

When I look into any of my three son’s eyes, [I] see how they’re all depending on me and going by my feelings and aura, basically. So I have to be the best role model I possibly can, even though I’m so scared, hurt, nervous or angry inside. They definitely keep me grounded and keep me going.

I still get so scared and don’t know what to do sometimes, but I continue to look deep down for my courage and I become “super mom” for my baby boy!

Just look way deep down in yourself and you will probably find your courage!

Has your child been diagnosed with a serious condition? Consider joining Health Stories Project and sharing the experience with the community.