About a month ago we published a post called Why Don’t Colleges Offer Depression 101? that received quite a few negative comments on Facebook. It was an interview with college professor, Jennifer Ganyo, about her experiences with Major Depressive Disorder (MDD), the stigma she faced when seeking treatment, and her efforts to help others who are dealing with depression. 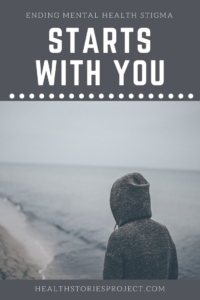 The title of that post was supposed to bring attention to the prevalence of depression amongst college students, and to point out that many are ill-prepared to recognize the signs and get help. A lot of Facebook commenters reacted negatively to the idea that educational institutions should take an active role in looking out for students’ mental health and many mistakenly interpreted the title as a literal suggestion for an actual course.

This idea that students are overly sensitive, delicate, or coddled seemed to really strike a nerve with some people, but their comments reflect a fundamental misunderstanding of who mental illness affects (hint: not just students), and how comments like these feed the stigma that continues to hold back progress.

One of the biggest hurdles for anyone suffering from mental illness is overcoming the stigma attached to it, and to getting treatment. This stops people from being able to learn more about the options available to them, which could be very helpful to reverse. At Health Stories Project we like to think we are working actively to reduce stigma. We believe in giving people opportunities to share their personal health experiences and to learn from the experiences of others because awareness and education have the power to transform lives for the better.

So, we wanted to face the negative comments head on and open up a dialogue with our audience.

Is ‘stigma’ really that bad? Yes.

First, it’s important to address the elephant in the room. While it’s tempting for some to brush depression off as laziness, whining, or just having a thin skin, mental illness affects roughly 1 in 5 people in the U.S. alone and stigma of mental health conditions has an enormous impact on us all. As so many of us do suffer from these mental issues, it’s about time that we considered taking it more seriously and helping each other out. People suffering from mental health issues can easily contact a therapist or mental health professional if they need help, or they could consider accessing some weed, such as the muerte strain, to see if that reduces some of these overwhelming feelings that mental health sufferers normally deal with. It’s so important to find treatments as mental health is such a dangerous illness.

Most people recognize the need for change.

A 1996 study initiated by Dr. Bernice Pescosolido, The Director of The Indiana Consortium for Mental Health Services Research, showed that mental health is an important issue for most of us. It found that “nearly half of Americans felt that the government should be spending more money on mental health services. Only 1 out of 10 people felt there should be less spending.” Yet a NAMI report at the same time found that funding actually decreased in more states than it grew.

Those sentiments hadn’t significantly changed 10 years later when the study was recreated. According to NAMI, “The results again showed that people were continuing to understand the biological basis and moving away from the past ideas of moral failing and personal blame. Yet again, the stigma remained. The 2006 study found no significant change in stigma. Slightly more than half of those surveyed said they would be unwilling to socialize with a person living with mental illness.” So, most of recognize mental illness is a problem that needs to be addressed, but we have not yet adequately acted on these beliefs. Despite our growing understanding and education regarding the causes of mental illness, stigma continues to thrive. In short, there is more work to be done.

If you’ve been affected by mental illness sign up to share your experiences with Health Stories Project.

What our community had to say…

We wanted to get a sense of how this stigma is affecting real people, so we asked: “Have you ever experienced stigma because of your mental illness?”

The result was a resounding, “Yes.”

What can we do about it?

We also spoke with Lauren M who is a grad student for clinical mental health counseling and the founder of End The Stigma a Facebook community that supports those suffering from mental illness. We compiled your comments and Lauren’s insights into the following action plan to end stigma:

1. Get help. Remember, there is no shame in having a mental illness.

Lauren says, “Know that having a mental illness is nothing to be ashamed of and make sure you get the help and treatment that you need in order to learn coping skills and to live more comfortably.”

If you can wait, make an appointment with your primary care physician or a specialized mental health doctor, such as one of the counselors in Lansing to name one example. In an emergency, the Suicide Prevention Lifeline is always available at 1-800-273-8255. You can also find a wealth of information and emotional support from groups in your community or online.

2. Think about the words you use automatically and make small changes.

“I had a family member say, ‘Everyone has bipolar. Get over it drama queen.'”

The language we use matters. Using words like “crazy” and “schizo” in a derogatory or flippant manner may seem benign, but the impact can be felt deeply. Luckily, being more mindful of how you speak isn’t hard. It just takes time and a bit of practice.

According to Lauren, “Many people aren’t educated about mental illnesses, and what they do ‘know’ is what they see in the media or portrayed in movies or on television shows (which we all know can be wildly inaccurate and stigmatizing).

One thing we noticed about the negative comments on our Facebook post is that it seemed as if most people didn’t bother to actually read the article that they were responding to. There were a lot of angry, annoyed voices that might not have responded had they clicked and read the post itself.

One way to ensure you’re getting the best info possible is by staying curious. Click, read, and search. Seek out reputable sources. Organization like the National Alliance on Mental Illness (NAMI) and the National Institute of Mental Health (NIMH) are good places to start.

“[I hear] statements like, ‘just be happy. It’s your choice.’ Or… ‘just snap out of it,’ ‘oh, it’s all in your head. Just think positive,’ ‘stop feeling sorry for yourself,’ ‘there are people with cancer or worse…”

When an illness or problem is invisible, it’s really tempting to doubt, minimize, or brush it off. Instead of trying to push a problem away, try listening without a response that might be interpreted as criticism.

“Walk a mile in our shoes before you open your mouth to criticize and judge, please.”

“No one asks for a mental illness. And it doesn’t come with an expiration date. What helps me, besides therapy and meds, [is an] online group for women with PTSD and other mental illnesses.”

We hear this piece of advice more than (almost) any other. People who share your diagnosis can be a wealth of information and support. Don’t be afraid to connect. Just remember, every group is different and you may need to try a few before you find one worth sticking with.

6. Pledge to be #StigmaFree

NAMI has a campaign to help spread hope and understanding. Mayim Bialik explains in this video.

Learn more about the movement and pledge to be #StigmaFree here.

Lauren says, “Sharing your story and being open about your mental illness can be scary and some people will react negatively, but it is also a great way of educating others–it can help people see what mental illness really looks like.”

If you’ve been affected by mental illness or another health condition, sign up to share your experiences with Health Stories Project.

2 responses to “Ending Mental Health Stigma Starts With You”