Breathe Easy: How One Man is Fighting To Change Perceptions of Cystic Fibrosis

We deliver new health stories each week! –> Get stories by email

Inherited genetically, cystic fibrosis (CF) affects more than 30,000 people in the U.S. alone. In fact, about one in 25 people is a carrier of the disease. Still, many don’t know about CF or understand just how devastating its impact can be. For those who are familiar with this disease, the perception of the illness can be quite bleak. That’s why when we met athlete, documentarian, and founder of the Breathe Easy movement, Matt Rosito, we were excited to share his story.

Matt, who has been living with CF for his entire life, has a big goal to spread awareness about cystic fibrosis. He wants to “shift the imagery of the chronic experience – highlighting lifestyles and not just hospital visits.” He sat down to speak with us about life with CF, his upcoming documentary, and the power of sharing stories. 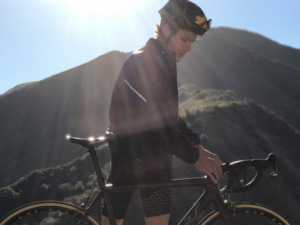 Q: When did you first start experiencing symptoms of cystic fibrosis (CF) and what has your experience been like?

I was diagnosed back in 1994 at 9 months old. I’ve always been extremely healthy by WebMD standards. It was only recently (within the last year or so) that I’ve had to start fighting a lot harder to keep my lung function up. Around June of 2016 was the first time I experienced something called hemoptysis (blood in the mucus). At the time, I wasn’t aware that this was a pretty common occurrence in people with CF so I was nowhere near prepared when I coughed and spat out some blood while sitting at a stop light on my bike.

Q: Have you suffered from any other medical complications related to your condition?

I have pretty severe chronic sinusitis (a condition where your nasal cavities become inflamed) and as a result my sinuses have been impacted by large nasal polyps. I spent about 8 or 9 months without my sense of smell because of the infection brewing in my face. Fortunately, a couple months ago, my smell came back and I celebrated by taking a trip to Bath and Body Works to smell all of the candles and lotions.

Q: What kind of treatments have you tried so far?

I’m on a pretty casual regimen. For me, after I went to find more details of my disease from my physiotherapist and how to manage it better. A lot of cystic fibrosis management actually comes in the way of physiotherapy, I have to be up and active otherwise I’m not clearing the mucus out. So daily “treatments” for me include: the vest (a percussive device that I wear that moves air around in my chest to help bring up some of the mucus), nebulized hypertonic saline to get some sodium moving through my lungs, and another nebulized medicine called Pulmozyme (or Dornase Alfa) which thins out the mucus, and most importantly the bike. Nothing gets the lungs working like intensive hard effort cardiovascular exercise. I haven’t tried any of the new disease modifying drugs like Orkambi or Kalydeco, but I hear from some it’s really giving them the opportunity to live lives that they weren’t able to before. 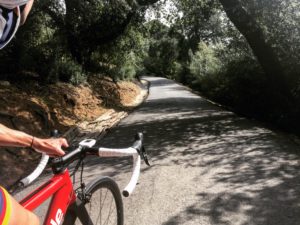 Q: What is the Breathe Easy Movement? What are you hoping to achieve?

We’re here to break the paradigm of chronic illness by presenting a new narrative, one that is both positive and proactive. Having a chronic illness doesn’t have to define our potential, instead, it can inspire us to achieve things once thought impossible. We want people living long lives driven by passion and agency. As advances in medicine evolve, so must our attitudes towards chronic illness and that starts with more hopeful mainstream representation.

Q: What will your upcoming film and docuseries be about?

Our film will seek to shift the imagery from hospital rooms, breathing treatments, and IVs to extremely active and healthy lifestyle habits of those living with CF. We will follow me on my journey towards my first Ironman in November this year and will feature the stories of fellow cystic fibrosis patients who have also found their own means of treatment outside of the hospital. Whether they found lifestyle tips on sites like https://www.kcssonline.org/ or pursued exercise goals like me, we will explore all channels that have provided different treatments. With interviews from leading researchers in the field of physical therapy, pulmonology, and nutrition we will attempt to inform the cystic fibrosis community and beyond about the importance of hard effort cardiovascular exercise and healthy lifestyle choices. We believe that there is a very clear correlation between diagnosis, behavior, and longevity, and we will attempt to identify new strategies for inspiring people with CF to get up and get moving.

The mini docuseries will attempt to capture something similar and give people a taste of what’s to come. We’ve reached out to some pretty awesome people locally who are fighting cystic fibrosis in their own unique way. No two cases of cystic fibrosis are alike and we want to tell each person’s individual story. We want to focus on positivity and empowerment. With this series we really want to express that breathing treatments and hospital visits are only part of the equation, outside of that, these people are doing their best to live very normal lives with very abnormal circumstances.

Q: Where and when will we be able to watch it?

We’re shooting for a release date in early 2018 but with funding being a bit of an issue at the moment we could expect to see that date pushed back a little bit. Initially we want to make our rounds in the festival circuit and in that time, we’ll have numerous screenings in the Los Angeles and Orange County area so we will keep everyone posted and up to date through email and social media.

Q: What made you want to film athletes with CF?

When I was growing up, a lot of my time on the computer was spent searching for other people out there like me who were either playing football or riding bikes competitively with CF and those searches usually yielded very little results. Fast forward to today and because of sites like Instagram, we now have more access than ever to hundreds of role models in the CF community. Documenting these stories would have such a profound effect on the future generation of people growing up with CF and quite frankly, parents with a newly diagnosed CF child need more hopeful imagery when they’re doing their research. There’s a lot of power in positive thinking so it’s important to me that we get people thinking positively from a very early age. 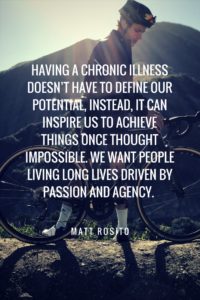 Q: What do you wish people knew about chronic illness?

People with chronic illness are not weak, they don’t require sympathy, and by no means should we underestimate their potential. I watched the Mt. Baldy stage of the Amgen Tour of California this year and got to witness a professional cycling team, whose athletes all have Type 1 diabetes, compete in one of the most difficult races in North America.

Q: Do you have any advice for other people who have CF or for the people who care about them?

Honestly, just get moving and think positively. Find something active that you’re truly passionate about and commit yourself to it. While the researchers are doing their job, we MUST do ours. We have to be willing to push ourselves beyond discomfort and get those lungs working while we still have the privilege. and strength to do so.

I endeavor to live a life for other people and if I could heal the world of affliction, I would. However, at this very moment, I don’t have access to such a tool. All I have is my story, and I can only hope that by sharing it, it will give another 13-year-old version of me out there somewhere some hope.

Q: Is there anything else you want to share?

If you ever feel that you’re alone in your fight don’t be afraid to reach out to someone over social media. Having CF makes it a little difficult to have other friends with CF that you can confide in face to face (we don’t want to get each other sick). Just know that there’s a whole community of support out there for you, we’re here and we’ve got you!

One response to “Breathe Easy: How One Man is Fighting To Change Perceptions of Cystic Fibrosis”