Despite a healthy, active lifestyle, Michael found himself in an ICU bed with kidney failure in 2019. He was diagnosed with multiple myeloma, underwent dialysis and chemotherapy and then a stem cell transplant. Still recovering nine months following this procedure and in search of pain relief, he chose to receive a massage. Rather than helping Michael, the massage therapist inflicted a different kind of pain when he was blamed for his cancer.

This is Michael’s telling of how a healthcare professional essentially accused him of causing his cancer — and left him feeling profoundly hurt.

I went from what I thought was a healthy, active man overnight to a patient in an ICU ward fighting for my life from severe renal failure.

After a multiple myeloma diagnosis was made, I continued dialysis and aggressive chemotherapy in preparation for a stem cell transplant. [That was a] two-week stay in the hospital [and a] brutal process.

After my discharge from the cancer center, I continued to have significant issues related to host vs. graft and general quality of life issues. I had developed a significant problem with neck pain, not directly from the cancer but from the long hours of being forced to lay flat, such as the four-hour sessions three times a week for dialysis. Fortunately, we were able to suspend dialysis, however the neck pain persisted.

Blamed Instead of Supported

A grueling nine months [following] my diagnosis, I decided to go to a local, highly recommended massage therapist. I thought it could be helpful for my neck. 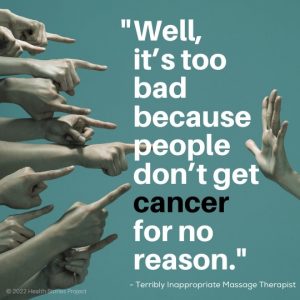 I had one massage during my pre-cancer years and found it profoundly helpful. At that time, I was just dealing with sore muscles from running many miles each week.

When I arrived at the therapist’s office, which was part of an office that specialized in complementary and alternative medicine, she had me fill out a health questionnaire. When she looked at it, all the medications I was on (by the way, I had never taken a prescription medication before developing cancer at age 63), she was shocked and seemed quite disappointed. Then she saw my cancer diagnosis and she refused to treat me. [After] a lot of reassurance from me that she could not harm me or make my cancer worse, she decided to start her therapy.

The massage was going wonderfully until the therapist started talking to me as she worked. She asked if I had ever received care from other practitioners of complementary and alternative medicine. I explained that except for the one massage, I had not.

Then she added, “So, no one had been advising you on good health care and diet before this?”

“No,” I answered. But I added, “As a medical provider myself, I think I was well aware of good health practices.”

There was a long pause. Then: “Well, it’s too bad because people don’t get cancer for no reason.”

The implication was that if I had been seeing one of her colleagues and was on a certain diet or taking certain supplements, that I would never have gotten multiple myeloma.

As good as the massage was, I was so upset at the time that I never came back to see her.

I had always taken good care of myself. I never smoked, rarely drank alcohol, ran 10-plus miles per week at the age of 63 and followed a Mediterranean diet. After multiple myeloma came upon me, destroying my kidneys and making me quite ill, I worked very hard to survive and endure.

To have someone suggest that my cancer was my fault for not practicing good health practices was especially painful.

Listen. Don’t assume that my cancer is somehow my fault. Stop assuming I’m whining when I say I’m too ill to do something. Stop comparing me to your grandmother or friend’s friend, who had multiple myeloma and still functioned normally (however, their cancer was discovered during a routine lab test before it had the chance to destroy their kidneys or bones).

Invisible illnesses can be harder than visible [ones] because society will see the wheelchair or the missing limb, but they can’t see your cramping and diarrhea from chemo or the pain in your bones.

Has someone suggested that you’re to blame for your health challenges? Tell the story today.