We first met Jim and learned his story when he signed up to participate in a virtual patient panel. If you’re interested in sharing your story and hearing about opportunities like the one Jim had, sign up to share your story.

“This is not a pretend disease.”

It’s a phrase Jim Weatherhead has used often over the last 30 years of his life. He’s talking about ankylosing spondylitis (AS), a form of arthritis that primarily affects the spine. It causes inflammation of the spinal joints (vertebrae) that can lead to severe, chronic pain and discomfort. “We’re not talking just a little pain,” he explains. “It started in my hips like ice picks and later like daggers between my vertebrae. Some days I could walk it off, some days I couldn’t even get out of bed.”

Jim first began experiencing pain in his hips at age 17 that led him to seek medical help (this was in the mid-1970’s). By the early 1980’s, Jim was suffering from severe lower back pain which became progressively worse over the next couple of decades.

“It was crazy because I was in great shape,” he says. “I looked like your prototypical football running back. The doctors I saw had such a hard time coming to terms with how much pain I was in because of the way I looked. One of them finally picked up on something and sent me to a rheumatologist in 1984 which led to my diagnosis age 26.”

Anyone who has suffered from a seemingly “invisible illness” like AS can tell you how fortunate it is to find a medical provider who picks up on the subtle clues about what’s really going on, especially 20 or 30 years ago. 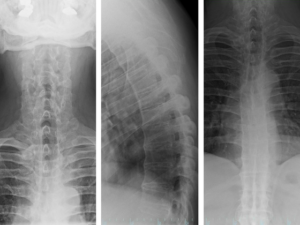 Jim’s x-rays from a year ago, which look MUCH better

“She was able to diagnose me right away, just by looking at my x-rays and blood tests,” Jim recalls.

“She said I was a textbook case of ankylosing spondylitis.

I got a glimpse of the radiographic scan by peeking around the curtain. Starting at my pelvis it was just glowing all the way up my spine – I looked like a Christmas tree.”

Getting a diagnosis was a step in the right direction, but it didn’t mean Jim would find immediate relief from his symptoms. Despite making dramatic changes in his diet and trying a number of prescription medications, the pain and stiffness eventually got so bad that he had to give up one of his favorite activities: competitive motorcycle racing.

While the symptoms of ankylosing spondylitis were excruciating, the feelings of isolation were even worse.

“The only other person I knew with AS was my mother so I just felt tremendously alone. By the time I was in my 30s, I felt so alone and hopeless that I was on the verge of suicide,” he says. In the depths of despair, Jim had a consultation with a young rheumatologist who talked about medical breakthroughs that were showing great promise. This helped Jim find hope and stay engaged in life, striving for a better future. 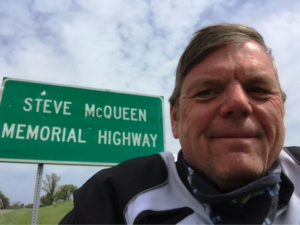 Jim began writing about what he had been through, which turned out to be an incredibly therapeutic experience and helped him connect with others when his story was published on a spondylitis awareness website called “Hope and Apples.”

“I wrote the article on my birthday,” he explains. “I woke up that morning thinking about how I wanted to share and track all of the things I’ve tried and so I started writing stuff down and it kind of morphed into the story. I think I was most motivated by wanting to show people that there is hope.”

He continues: “It was almost like a traditional grief journey for me: you start out in denial, then depression, then anger, and you have to get to the point of acceptance before you can really begin to address it, find some hope, and maybe even success at treating it.”

“There was a little bit of ego involved,” he admits. “I wanted to say ‘hey, I survived this, I learned to live again. You can too.'”

If Jim’s goal was to help others, he succeeded. After his post was published, Jim received several private messages on Facebook telling him that “it was inspirational,” or “I read that right when I needed to see some hope.”

The turning point was in 2001, when his rheumatologist recommended he start taking a biologic medication called Remicade. For Jim, this was the first treatment that helped him successfully manage his inflammatory symptoms. 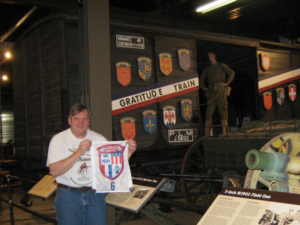 Not only has he been able to take up competitive motorcycle activities again, he’s winning events and placing well on a regular basis. He recently completed a long-distance rally, in which he rode over 2,500 miles in 48 hours – a feat he never would have dreamed of a decade or two ago.

Jim also shared his experiences through the Spondylitis Association of America’s magazine, Spondylitis Plus, in an article titled “My Surreal and Deeply Emotional Day – Jim’s Story.”

“It was most surreal day at work,” he recalls. “I was going to meet with some new people. As I walked into the building, I realized that their office is in the same building as the doctor that I first saw to start treating my AS. There I was back in the same (now repurposed) office, 30 years later, and I had come so far.”

Jim continues to speak out about his experiences to inspire others who are facing this disease.

“Treat AS aggressively and never take a day off,” he says. “There are days you need to rest, but don’t rest because you can – rest because you must. This is one disease where you have to keep moving. If I’m not active for even a couple of days, I really notice a difference.”

Jim also encourages people to focus their efforts on treating the source of their symptoms, not the symptoms themselves.

“Don’t rely too much on narcotic pain medication,” he cautions. “It’s easy to get caught up in that and can lead to problems. You can build up such a tolerance and then be cut off at some point – then you’re really in trouble as your pain threshold may become compromised. There are medications out there that can treat the disease itself and when you stop or slow the disease activity you can stop or greatly reduce the pain. Focus treatment on the inflammation, not the pain.”

Have you been affected by ankylosing spondylitis or another health condition? We have opportunities for you to share! Sign up today.