The Road Ahead: Life with Parkinson’s After Deep Brain Stimulation

By the time Karyn Spilberg was diagnosed with Parkinson’s disease, she knew all too well the devastating effects it could have. She was diagnosed just as her father reached his 13th and final year with the disease. Without palliative care similar to what can be found at https://www.wilshirehomehealthcc.org/palliative-care/, the disease can suffocate the enjoyment you once had in your life.

She was walking with a friend on a warm spring day in 2003, when her friend noticed, unbeknownst to Karyn, that her left arm had been hanging limply by her side and she was dragging her left leg. Fearing a stroke, she visited her general practitioner that afternoon and was referred to a neurologist the following morning. 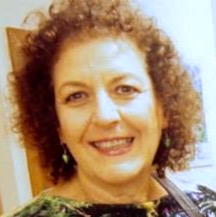 Despite the fact she showed no tremors, one of the classic symptoms of Parkinson’s, her neurologist suspected almost immediately that she had the disease.

“My situation was unusual because I got diagnosed basically overnight,” she says. “I hadn’t noticed anything before that happened.”

Parkinson’s is a neurodegenerative disease that gradually leads to the destruction of brain cells that produce dopamine, a neurotransmitter that helps us maintain smooth, controlled movements. This process usually takes place slowly, and people often live for years with the disease before it becomes apparent to those around them.

However, once 60-80% of the cells that produce dopamine are damaged or destroyed, the telltale symptoms of Parkinson’s begin to appear: tremors, slowed movement, rigid muscles, impaired posture and balance, loss of automatic movements such as blinking or swinging one’s arms while walking, and impaired speech and writing.

As if these aren’t bad enough, medications taken to treat Parkinson’s often lead to many side effects of their own. A lot of people who are diagnosed with Parkinson’s find that physiotherapy can help them by increasing their range of motion and improving their strength and endurance. This treatment is offered by Ck Physio, for example. However, unfortunately the medication still needs to be taken, whether they are having physiotherapy or not. 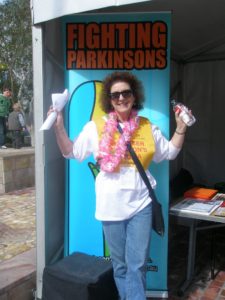 Unlike her father, who was diagnosed at 63, Karyn was only in her mid-40s at the time. Cases like hers are referred to as Young Onset Parkinson’s. Her neurologist told her she would probably have a five-year “honeymoon period” with Parkinson’s disease before her symptoms became severe.

She made the most of this time, traveling all over the world for both Parkinson’s advocacy events and her own adventures. Her destinations spanned the globe, from Alaska to Vietnam and many places in between.

But just as her neurologist had predicted, the so-called honeymoon phase came to a close and the Parkinson’s symptoms she suffered grew more and more pronounced.

Karyn began to “freeze” more frequently, entering a state where she was completely incapable of movement. Her toes would curl or cramp, making walking near impossible. This sometimes got to the point where she would leave her room only to go to the bathroom

She also suffered from episodes of dyskinesia, a response to her medication marked by involuntary movements that often came at the worst times. One such incident in a china shop ended especially poorly.

Her regimen of drugs included Sinemet, a widely prescribed Parkinson’s treatment. Sinemet is a combination of Levodopa, a drug designed to spur dopamine production in the brain, and Carbidopa, a compound to reduce nausea and boost Levodopa’s effects. Though effective in stemming some symptoms, use of Sinemet in the long-term is tied to the development of dyskinesia. Prolonged use can also lead to the development of “on-off” periods, when the medication unpredictably stops or starts working, a major concern for Karyn.

She also briefly took another medication called Mirapex, a drug which can cause people to make impulsive decisions. For Karyn, this mostly resulted in purchasing an overabundance of plates from eBay, but for others, it can lead to much more destructive behavior.

In 2009, her doctor suggested she consider Deep Brain Stimulation (DBS), a surgical procedure where low intensity electrical current is applied directly to the brain to reduce tremor and block involuntary movements.

The use of electrical stimulation for therapeutic purposes dates back all the way to ancient Egypt, where exposure to electric fish was used as a treatment for neurological disorders. Needless to say, modern deep brain stimulation has only a limited resemblance to those ancient practices.

Several days before the initial surgery, a patient undergoes a battery of tests including an MRI or CT scan of the brain which will serve as a road map for surgeons. The procedure itself is generally done in two separate parts. 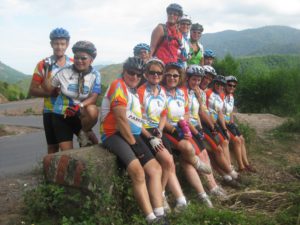 Karen was awake for the first stage of the procedure, when electrodes were implanted on her brain. Her head was placed in a “halo” to prevent her from moving and the surgeon drilled two holes through her skull. She could hear this happening, but felt no pain because she was given a local anesthetic.

“I was not at all nervous,” Karyn says. “As I’ve told everybody, ‘put yourself in the hands of your surgeon and neurologist and go for the ride.'”

Next, it was time to implant a device to generate the electricity for the stimulation. One option was a battery that required no maintenance but would need to be surgically replaced every three years. Instead, she chose a battery that requires recharging every couple of weeks, but only requires surgical replacement once every seven to nine years.

The first two weeks after the procedure, Karyn felt great. “They drill you, the brain swells up, you feel fantastic,” she says.

After this period, she “came back to earth,” as she describes it, and the process of calibrating her generator began. She would visit her neurologist every couple of weeks and they would experiment with the settings to determine what level of electricity best subdued her symptoms without producing other negative effects.

Eventually, they got it right and Karyn says she hasn’t changed her settings in around two years. She stresses that DBS is not a miracle cure, but it has worked well for her. Though her handwriting is still near illegible, and her voice is not as powerful as it once was, most of her other physical symptoms are being kept at bay. It has also allowed her to minimize or eliminate some of the medications upon which she had become reliant. She was recommended to go for a Parkinson’s physiotherapy assessment to discover how physio could help get Karyn back on the right tracks physically. 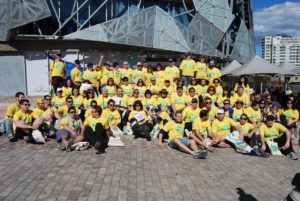 Now 57, Karyn knows she has been fortunate to have a strong support system. Her husband John has been by her side through the ups and downs, and the couple has had the financial wherewithal to travel and enjoy their time together. Even now, the two still travel as often as they can, albeit at a slower or less physically demanding pace than they once did.

She’s also stayed very active around Parkinson’s advocacy. She’s traveled around the world to speak at conferences, and also founded Young @ Park, an organization dedicated to supporting those who are living with Young Onset Parkinson’s, as well as their partners.

Karyn says she’s always been a “glass-half-full” type of person, and that her optimism has served her well in her battle with Parkinson’s. She knows that each individual’s struggle is unique but offers the following advice to those who have recently been diagnosed.

Four years after having DBS, Karyn is glad she went through with the procedure. She doesn’t know exactly where the road will take her next, so she tries to live in the present.

“Who knows about the future?” Karyn says. “Make the most of life while you can.”

Have you been affected by Parkinson’s or another health condition? Sign up to share your experiences with Health Stories Project!