John Linnell knows how to put people at ease. When asked how he’s doing, he delivers a humorous response with impeccable timing. “If I were any better, I’d be twins,” he says, chuckling a little at his own well-worn bit. “But then I’d be beside myself!”

It’s exactly this easy-going manner that has made Linnell a natural spokesperson for chronic obstructive pulmonary disease, commonly known as COPD. An estimated 12 million Americans are living with COPD and according to the NIH, as many as 12 million more have it without knowing. Linnell, who was diagnosed in 2005, is a tireless patient advocate, serving as the Wisconsin state captain for the nonprofit COPD Foundation, among other outreach efforts. He is so knowledgeable about COPD that some of the scientists he’s worked with as a consultant have even called him Dr. Linnell as a compliment. 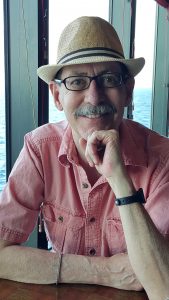 Learning as much as possible about the condition and talking to other patients helped Linnell get through his diagnosis 14 years ago. At the time, he’d gone in for his annual well-visit and mentioned that getting old was a drag. “Wait a minute, you’re 49 — you’re not old!” his doctor had responded. Linnell mentioned that he’d been feeling sluggish; that getting up and about in the morning was harder and harder. Because of his history of smoking, his physician referred him to a pulmonologist, where testing revealed COPD.

“When you’re diagnosed with COPD, you don’t know much about it,” says Linnell. “I decided to own it.”

Still, he wasn’t expecting the long list of questions that would crop up when he was let go from his job after his performance began to falter due to his health, an outcome he had assumed was coming sooner or later. “How does one get disability? Now I don’t have insurance — how will I pay for the doctor? And my oxygen and my medicine? I had to figure all that out on my own. And I had to emotionally and mentally talk and connect with the fact that I had COPD but I didn’t know where to find support.”

Linnell soon connected with one of the American Lung Association’s Better Breathers groups, which meet monthly. “The camaraderie is fantastic,” says Linnell. “There’s usually a guest speaker and you’re with other people with COPD. Nobody really ‘gets it’ unless they have it. I now work with some of the top pulmonologists in the world and they don’t truly ‘get it’ because they don’t have it.”

He figured out how to navigate the process of applying for Social Security disability, find more affordable prescriptions, and volunteer for clinical trials to try new treatments. “All of a sudden I’m getting paid to go to the doctor,” he says with an ironic chuckle. “But I was still renting out rooms at my house to barely squeak by.”

Then, at a Better Breathers meeting, he heard about a company that was looking for COPD ambassadors. He had a feeling he’d be a good fit for the gig and sure enough, he landed it. That led to other opportunities and he’s since consulted for pharmaceutical companies and hospitals, served on the board for patient-focused organizations, and advocated for COPD research in front of government officials in Washington, DC.

“What’s funny is it seems that I work harder now than I ever did when I had a job,” he says.

“I have a CV now and it’s far more impressive than when I was in the workforce and had a resume. I’ve spoken at Congressional briefings. Ted Koppel’s wife, Grace Anne, has COPD and she is a tireless advocate as well. In fact Grace Anne exemplifies advocacy and is considered a good friend. Grace Anne and Ted were at one of the briefings on the Hill that I spoke at. Nothing like speaking in public with Ted Koppel in the audience listening to you!

“He and his wife Grace Anne are awesome people and their Dorney-Koppel Foundation has done so much for the COPD community. I’ve made good friends and done more than I ever thought I would or even could. I’m even the co-investigator on a study at Johns Hopkins right now and recently learned that an article I co-wrote with a renowned British pulmonologist is going to be published in a peer-reviewed medical journal.”

Linnell has end-stage COPD. “In clinical terms, that just means it’s the end of what modern pharmaceutical medicine and doctoral medicine can do for you,” he explains. “It’s not curable, but it is treatable.” 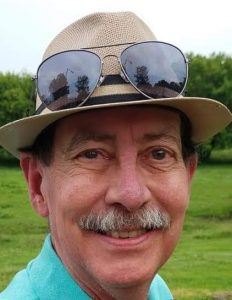 He emphasizes the importance of having a “Personalized Action Plan,” pays close attention to his health and remains in regular touch with his physician about his concerns. Last December, he had his first COPD-related hospital stay after being diagnosed with pneumonia and attributes a relatively positive outcome to being “partners in care” with his medical team. “It could’ve been a lot worse but I did what I was supposed to do when something was off,” he says.

“A lot of people complain that their doctors don’t tell them anything,” Linnell says. “Well, a lot of patients don’t ask anything. Trust me, if you tell your doctor that you want to be a partner in care, their jaw will drop and they’ll pay attention.”

While he’s had to cope with some big changes in his life since being diagnosed with COPD, Linnell refuses to let it stop him from living. He, his wife, and his elderly mother-in-law will soon embark on a big cruise to various European ports of call. He said he was spurred to book the “bucket list trip” after a COPD buddy was told she could no longer fly.

“Life is a bowl of ice cream,” says Linnell. “I’m going to enjoy it before it melts. Attitude has a lot to do with how we can live our lives. I could be the guy sitting around with a hose in his nose, but I choose not to. I choose to do everything I used to, albeit sometimes more slowly, with more planning, and often more slowly, but I still do it.”

In the meantime, the COPD community couldn’t ask for a more passionate ambassador for their condition than Linnell. “I’m going to do my best Ted Koppel voice and repeat what he said at Medicine X at Stanford,” he says. “COPD kills 160,000 Americans every year. That’s more than were killed in the Korean War, Vietnam, Afghanistan, and Iraq combined. I want you to think about that for a moment. Every year. Yet where’s the outrage and what is being done? I think the time to act is now because that is not acceptable.”

Thank John for his advocacy work in the comment section below.

You can also share your story by clicking here. You may just be featured on our blog!