25 Insights From People Living with Schizophrenia

For people with schizophrenia, diagnosis can be a relief — all those symptoms finally start to make sense – but also a devastating and life-altering moment. Schizophrenia is a chronic and severe mental disorder characterized by thoughts and experiences that are out of touch with reality, disorganized speech or behavior, and limited participation in daily life. It’s also widely misunderstood. Pervasive negative stereotypes and social stigma often lead to feelings of shame, low self-esteem, and isolation. The road to acceptance and recovery can seem impossibly long and difficult.

The good news is that many people with schizophrenia are able lead relatively healthy, productive lives. The National Alliance on Mental Illness estimates that up to half of the two million Americans with schizophrenia will recover significantly with the right treatment, which includes medication, therapy, social rehabilitation, and a strong support network. While there’s no cure for schizophrenia, recovery can mean no longer showing symptoms, interacting in a positive way with friends and family, and living independently.

Of course, that’s certainly not the case for everybody. Like any mental illness, schizophrenia shows up in varying degrees of severity. Not only that, but treatment is highly individualized, often requiring a lot of trial and error, and relapses do occur. People with schizophrenia and those who care about them face a lifetime of struggles, small and large.

Rather than speak for them, we asked members of the Health Stories Project community to share their experiences with us*.

How has Schizophrenia affected your life?

“This has made my day-to-day reality incredibly challenging,” says Alan. “My marriage has fallen apart and I do not work. I have suffered very intensely in the past and continue to do so.” 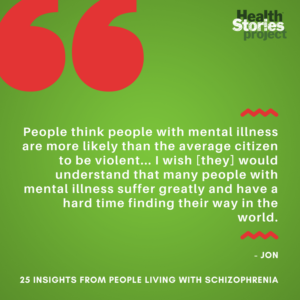 “I can’t hold a regular job,” says Jon. “I’m on disability and my medications cause weight gain.”

“I have an extremely hard time going out in public as well as meeting people,” says Carmen.

“It’s always been hard to maintain jobs, friendships, relationships, and even life,” says J.L.L. “I spend a lot of time fighting it.”

“I can’t drive due to hallucinations,” says Lindsay. “I can’t leave my home alone. I’m terrified of the grocery store.”

“This disease has taken everything,” says Malena, who wrote in about her daughter, for whom she is a primary caretaker. “It has taken her education, the chance to drive, to graduate with her class, to keep friends, her self-esteem, her freedom, and at times, her sanity. We’ve lost family and friends.”

“Schizophrenia is very difficult, having hallucinations and delusions all the time,” says Mathew. “It’s very debilitating to live with.”

While responses from the community varied in the details, certain themes emerged clearly. Even for those who don’t suffer from the severest of schizophrenia symptoms, holding down a job can be difficult or impossible. Schizophrenia can make social interactions extremely challenging, and can wreak havoc on friendships, relationships with family members, and marriages. Daily life is often fraught with fear, pain, and unrelenting inner turmoil.

Many of those who wrote to us felt it important to address the false perceptions and stigma attached to schizophrenia.

“People think someone with schizophrenia is going to hurt you,” says Jay. “That there was something they did to become that way. That they are a burden to society.”

“They’re not ax-wielding murderers,” says Malena “People with schizophrenia are more easily manipulated and conned and so are usually victims.”

While readily admitting the depths of their struggles, many community members also shared coping skills and how they continue to find strength, hope, and happiness.

“I read books and blogs about people with this disorder,” says Victoria. “It helps to know you are not alone.” 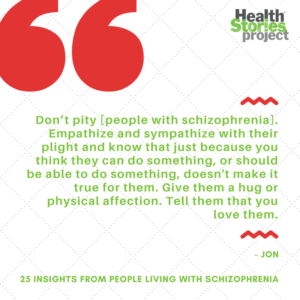 “Learn everything you can about the condition,” says Cassie. “Try to find meds that work best for you and not against you. Don’t be afraid to say something if you don’t like the way the meds make you feel.”

“Be willing to work with your doctor and your family about treatment, including taking medication, talking with someone you can trust for therapy or counseling, and so on,” says David.

“Be as hopeful as possible but also be yourself,” says Kandice. “Take care of yourself and let people help – it gets better.”

“Find the spirit world,” says Jon. “Eat a ‘clean diet.’ Get some exercise even if it is just walking for a while during the day. Get some sun. Do what you feel comfortable doing in life. Be as philanthropic as possible. Talk about your illness with others. Maybe take up an art and express to others what you are going through.”

“Don’t feel as though you are held back,” says J.L.L. “Try every day to take it head on, even when you are alone or feel alone. Remember, we are never alone, and if it becomes too much, find that one thing that makes you happy, be it games, books, hobbies, or shows. Embrace who you are and don’t look back.”

“When I was younger I struggled to connect and understand people,” says Theo. “Today I have tools that enable me to work and live nearly a regular life. I became a Zen Buddhist and I found peace. Don’t Panic. Breathe. Meditate every day. Take up yoga or tai chi or qi gong. Do less interaction with electronics and more with nature.”

“Accept challenges and handle what you can each day,” says Bob.

And finally, the Health Stories Project community offered plenty of sound advice for family members and extended support networks of people with schizophrenia. 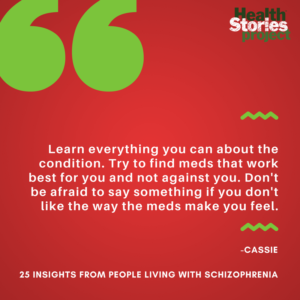 “Don’t ignore the symptoms and reach out in any way you can for support,” says Malena. “Be there and do not leave. Don’t pretend that they are fine and don’t tell them stupid things like they just want attention, they could change if they wanted, they’re faking it.”

“Even if you don’t understand it, embrace and accept it,” says J.L.L. “The person with it will feel better if they can be more open about it.”

“Treat them gently,” says David. “Make it easier for the diagnosed person to make transitions, learn to communicate with them in ways you haven’t done before, including learning new vocabulary. Don’t expect them to control it on their own.”

“Don’t give up,” says Jan. “Assist them in getting treatment and hospitalization. Read up on their diagnosis. Help them find a career they can do well in. Encourage them to develop relationships that are supportive.”

“Don’t pity them,” says Jon. “Empathize and sympathize with their plight and know that just because you think they can do something or should be able to do something doesn’t make it true for them. Give them a hug or physical affection. Tell them that you love them.”

Have you been affected by Schizophrenia or another health condition? Sign up to share your experiences with Health Stories Project!

*We’ve identified respondents by their first names only; anonymous responders were given names.

14 responses to “25 Insights From People Living with Schizophrenia”