“Putting Out Fires” Without Enough Water: Life with Mental and Physical Health Issues

In a span of just over five years, Frank experienced multiple health challenges that further complicated a mental health issue that, on its own, led to disability. This is how he described the journey and the perspective he gained along the way.

I was stressed out at work about six to seven years ago. Everything got jumbled up in my head. I went to the hospital because I was “losing time.”

I spent some time in the hospital in psychosis. I 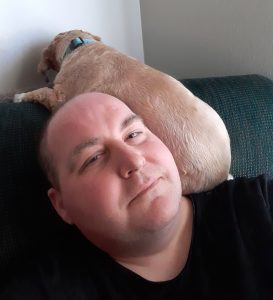 left the hospital still in psychosis, which lasted almost a year until I got several rounds of ECT (electroconvulsive therapy) treatments, which helped a lot. I [was] not as bad but I still didn’t feel myself.

I was finally able to get disability.

Then I was diagnosed with neuropathy in my feet and suffered with it, though the Lyrica works well. Then I had a pulmonary embolism, which put me in the hospital for a few days. I also gained over 100 pounds that first year or so, which probably led to herniated discs in my back. I had three back surgeries in the last three years. Microdiscectomies.

Beyond that, I have generalized anxiety. I can’t forget I [also was diagnosed with] Barrett’s esophagus three years ago. I had cells with high dysplasia so I have been getting RF ablation therapy, which burns off the bad cells every three months.

I also had undiagnosed C. diff [colitis] for about a year and no one could figure it out until I nearly died from it. I suppose that’s most of what has happened in the last six years.

I feel like I’m putting out fires and don’t have enough time or water to do so. I have to list things by importance and by the doctors’ schedules.

My significant other who also has schizoaffective disorder is a big support. She has been there for me even when I wanted to give up. Also, my doctors and counselors have been of great help.

Address everything you can as soon as you can. Find something you can do or think of that makes you happy and hold on to it. Don’t let go of that happiness. Be careful what or who you choose, because being let down is just part of life.

Listen to music in the morning when you get up. It helps to start your day off in the right direction.

If you’re living with both mental and physical health challenges, consider sharing your story.