Alisha Bridges wasn’t always the confident young woman she is today. After being diagnosed with psoriasis as a child, she spent most of her life covering up her skin from neck to toes and hiding her condition from just about everybody. Now she’s a full-time psoriasis blogger and advocate who isn’t afraid of a mini-dress.

Bridges, who writes about life with psoriasis on her blog, Being Me in My Own Skin, was only 7 years old when she was diagnosed with the persistent skin condition. Before that, her family assumed the patches on her knees and elbows were just dry skin.

“At that age, I didn’t know what it would mean for my future,” says Bridges. “You haven’t really faced societal standards for beauty and what it means to look ‘normal.'”

The Social Challenges of Life With Psoriasis

By the time she was 10 years old, Bridges became increasingly self-conscious about how she was different. “I started covering up,” she recalls. “In school, I stopped myself from participating in activities and functions. I’m really tall and people wanted me to play sports, but I wouldn’t do it because of the required uniforms.”

She dated in high school but avoided intimacy. As a sophomore, she found a boyfriend who made her happy until he broke up with her out of the blue. “The rumor was that people were making fun of him for dating me. They said I was unattractive.”

For Bridges, who is naturally bubbly and outgoing, isolation became a coping strategy. In college, her psoriasis worsened. “You could see spots on my hands, forehead, and neck. People knew something was there. I tried to avoid conversation about it because there were too many questions from people who’d never heard of it.”

Psoriasis, which is not contagious, is much more complicated than a simple skin rash. It’s a chronic autoimmune disease that speeds up the lifecycle of skin cells. As the cells build up on the surface of the skin they cause scales and red patches that itch like crazy and can sometimes be painful. Triggers for flare-ups include weather, stress, minor skin traumas, and alcohol.

“My grandmother worked very hard to make me an ambitious young lady,” says Bridges. “But self-esteem and self-confidence were always missing. My grandparents, who raised me, didn’t realize how much it affected me as a person.” 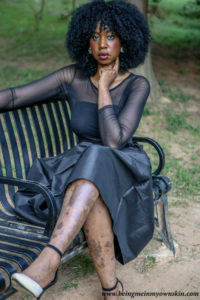 Bridges suffered from anxiety and panic attacks when she was in situations that forced her to show her skin. Tall and slender, she once dreamed of being a model and entered a beauty pageant. “When it came time to put on the dress, I was in the bathroom having a sort of nervous breakdown. I had the same feeling when I tried on wedding dresses.”

Being Me in My Own Skin

Around eight years ago, Bridges wrote a letter and posted it in a psoriasis support group. Called “My Suicide Letter,” it was about killing the parts of her that were stopping her from living life to the fullest. “Killing the fear, the low self-esteem, the thoughts that I wasn’t good enough. Psoriasis really holds you captive.”

The letter resonated with a lot of people and it attracted the attention of the National Psoriasis Foundation. “NPF invited me to a conference,” says Bridges. “For the first time in 22 years, I met other people dealing with the disease. It gave me power. It let me know that I wasn’t alone.”

The conference also included a seminar on blogging. “I saw it as a tool to get out some of my frustrations of living with psoriasis. Immediately after I left that conference – literally on the plane – I started writing out blog ideas.”

Bridges is an Atlanta resident who has a background in marketing and communications, ranging from marketing campaigns to digital marketing solutions such as financial advisor leads. She hasn’t let her condition overtake her careers and aspirations and has since won awards for her blog which includes everything from articles on self-esteem to resources for a variety of treatments. She encourages readers to find psoriasis specialists and seek mental health treatment if they’re suffering from depression or anxiety, which are often concurrent conditions. She tries to post at least once a month, and includes guest posts from other people with psoriasis.

Advocacy as a Career Path 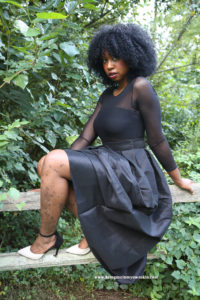 She has also made advocacy her full-time career, launching her own business called Health Media Consulting. She works with companies on social media as an ambassador and patient engagement specialist, and regularly travels to attend medical and health-blogging conferences. In February, she’ll head to Capitol Hill in Washington D.C. with NPS to lobby congress for research funds. It’s so amazing that she has turned an insecurity of hers into a career. She’s now able to use her platform to help others overcome their insecurity of psoriasis. As a business owner and blogger, she is able to raise awareness of these issues. However, if she ever wanted more publicity on some of the positive things she’s doing, she could consider reading this blog post on Victorious that explains how public relations and search engine optimization actually go hand in hand for those trying to make big announcements. As she’s trying to raise awareness and spread positivity, those two marketing techniques could actually help her to gain more publicity. Maybe she should look into that. She is doing such a great job of promoting self-confidence, and more people need to hear it!

For now, Bridges has found a biologic medication that’s dramatically reduced the frequency and severity of her flare-ups. If that stops working, she’ll do her best to find another treatment that does. But no matter what, she has the self-esteem and confidence to deal with whatever comes along. And she wants to help her fellow psoriasis sufferers feel just as strong.

“My goal is to speak on behalf of others who are afraid so people on the outside looking in can understand what it means to live with psoriasis,” she says. “I can’t tell you how blessed I feel to do something that I absolutely love.”

We have opportunities to share your health experiences including feature videos, advocacy programs, and more. Learn more and sign up!

15 responses to “Overcoming the Psoriasis Paralysis: How Alisha Bridges Became a Full-Time Blogger and Psoriasis Advocate.”