To Love and Care For: How One Couple Copes With Early Onset Parkinson’s

Ten years ago, when Carolyn first met her husband, John, she knew he “had something.” He’d exhibited dyskinesia, or involuntary muscle movements, as they’d chatted. On their next date, when he explained that he suffered from early onset Parkinson’s disease, her response was refreshingly matter-of-fact. “I told him, ‘That’s a tough one,’” Carolyn says. “And then I proceeded to learn more about it as our relationship progressed.”

John warned her not to google Parkinson’s. “So, of course the first thing I did as an analysis-to-paralysis English major was learn everything I could about the disease,” says Carolyn. At the start, John, who was diagnosed with Parkinson’s at 41, was at a stage where he was active, independent, and taking a lot of medication. “Probably too much medication,” she says. “But we didn’t have issues of me feeling like I had to care for him.”

A decade later, the couple is still going strong, but Carolyn has gradually taken on a new role. “Over the past several years, the disease has progressed rather quickly,” she says. “It’s gone from him being independent to me being pretty much a full-time care partner. Our journey has been in incremental steps.” 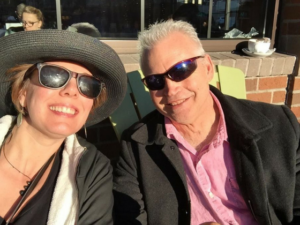 The Progression of the Disease

Parkinson’s is a progressive disorder of the central nervous system that affects movement. It typically affects adults over the age of 60, though some, like John, are diagnosed much earlier (well-known actor and Parkinson’s advocate Michael J. Fox was famously diagnosed at age 29). While treatments continue to advance, there is no cure at the present. The late stages of the disease include complications like dementia and sleep disorders.

In the early stages of Parkinson’s, John experienced dyskinesia and excruciating muscle cramping, but no tremors, the most well-known Parkinson’s symptom. “I remember opening the cupboard near the sink, which would usually be dishes, and it was all drugs and supplements,” Carolyn says. “I was like: ‘Wow.’ Most of the symptoms that he had then he was able to manage pretty well with his medication.”

Receiving such a life-changing diagnosis “lit a fire underneath” John, says Carolyn. “He decided to pursue his landscape photography with a vengeance, which he’s still doing. He’s now represented by the Linda Hodges Gallery in Seattle. A lot of our time has been spent hiking and traveling and photographing.”

The couple has had to slow down their pace significantly over the last 10 years, replacing multi-night backpacking trips with drives and day hikes. John’s decline has included major events, like kidney stones that led to an infection and a lengthy hospitalization, as well as an ongoing worsening of symptoms. “It’s still day by day, but on rough days, he often can’t get up without assistance,” says Carolyn. “So a lot of it is gradually needing more and more care, and it’s a balance as to how much help he needs or wants. For a long time he was trying to be independent and now he is getting better about asking for help.”

How Carolyn Handles Being a Care Partner

Being a care partner has also affected Carolyn’s independence. She runs her own business doing digital marketing, which gives her the freedom to care for John, but his needs keep her busy. “I am pretty much with him all the time now. He has balance issues and he has trouble getting up out of chairs. He doesn’t drive, so if I am gone he is completely isolated. He often needs assistance getting dressed. I pretty much do everything, which I shouldn’t. That is the balance I am trying to get right — I don’t want to be an enabler. The more I take on, the less he will do. If I suggest he make a stir fry, he might start and then get tired and sit down midway through and I’ll have to finish.”

For the couple, every day is different. When John has a fitful night of sleep — one of the most devastating symptoms of Parkinson’s — so does Carolyn. She worries constantly when she’s not around. He’s fallen at the house while she was at meetings and has embarked on walks that he gets too tired to finish. They have “agreements,” she says, to prevent such occurrences in the future and friends have stepped up to help. 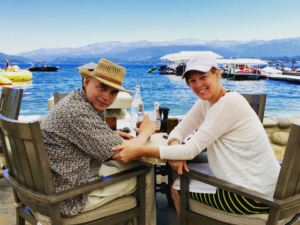 In hindsight, Carolyn wishes she’d sought out support earlier rather than just rolling with the punches. There’s a strong Parkinson’s community support group where the couple lives on Vashon Island in Washington State. “John has spoken and presented his photography there, but he doesn’t really like to go to those. He said, ‘Why would I want to see how bad I am going to be in the future?’ In some ways, his lack of wanting to access support has affected my being able to do that.”

But they’ve found support in other places. “What we have really found helpful is him having friends with Parkinson’s and me being able to talk with their wives,” says Carolyn. “He also has close friends and family that are very protective and loving and they are always ready to be there. I think that having friends that love you and are willing to be part of that team is very important.”

Carolyn’s Advice to Others Navigating Parkinson’s

Her advice to other couples navigating a diagnosis of Parkinson’s? “I would say simplify your life as much as possible. Figure out what your basic sustenance level of living is so that you know. If you have financial stress, it makes it really impossible. You want to try to get rid of as many stressors as possible, which of course is not always realistic to be able to do that. You may have to seek out other resources.”

Even as the disease progresses and the challenges mount, life with Parkinson’s can be fulfilling for both patient and caregiver — especially when that team is bound by love. 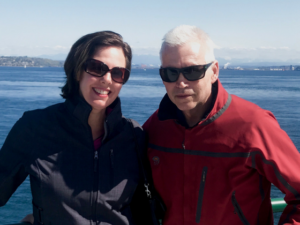 “There is a lot of joy for caring for someone, and I think that can sometimes get overlooked,” says Carolyn. “You can have the worst day and you can be frustrated and tired and the next day can be beautiful. So, it’s really just understanding that: ‘This too shall pass.’ With Parkinson’s, you know it’s going to get worse, you know that, so you really just have to take one day at a time.”

Do you have experience with Parkinson’s or another health condition? Sign up to share your experiences with Health Stories Project.