More Hopeful Than Ever After 35 Years with Multiple Sclerosis

January, 1980. Things were looking good for Mark Tallman. He had just been promoted at the oil company he worked for to run one of its warehouses near Salem, Ore. As he was conducting the inventory one morning, he dropped his pen. Paying little mind, he picked up the pen and continued on with his routine.

Then he dropped the pen again. Huh. Maybe it was just one of those clumsy mornings, he thought.

Then he dropped his clipboard. Startled, Mark began to walk towards the office and noticed that he was dragging one of his legs. He called his doctor, who told him to get somebody to drive him to the emergency room immediately.

“I think he was worried I might be having a stroke or an aneurysm or something,” recalls Mark, who is now 56.

The staff at the hospital had similar concerns. Mark remained in the intensive care unit for several days as they conducted various tests to try to figure out what was going on with him. One by one, they ruled out the most likely suspects.

It wasn’t until about two weeks later that Mark’s family medicine doctor was able to determine the source of his symptoms.

“They finally performed a spinal tap and detected inflammation in spinal fluid,” he says. “That’s when they told me I had MS.” 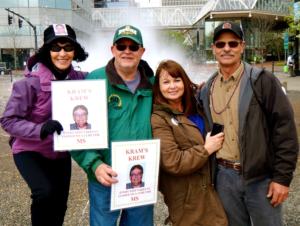 MS, or multiple sclerosis, is a disease in which the immune system attacks the protective sheath that covers the nerves. The resulting damage disrupts communication between the brain and the rest of the body, something that would explain Mark’s sudden propensity for dropping things.

That was a really tough day for Mark, who didn’t know much about MS at the time. “All I knew was that people with MS were usually in wheelchairs,” he explains.

Nobody in Mark’s family had ever been diagnosed with MS, and the medical staff at his local hospital didn’t provide him with much in the way of treatment advice. He began researching the condition to educate himself over the next few years, and eventually found a neurologist at nearby Oregon Health & Science University (OHSU) who specialized in treating MS.

“Specialized” was a relative term, though, because far less was known about the disease at that point. Mark’s new neurologist prescribed him corticosteroids to reduce the inflammation he experienced with each attack and suggested that he follow a fat-free diet, something that was recommended for cancer patients as well.

“It was just kind of a hard situation because I had a mild form of MS called relapsing-remitting and didn’t have really serious issues like some people,” says Mark.

As difficult as those first few years were, Mark would get some inspiration from an unlikely source. In 1982, his seven-year-old cousin Korri let him know that her school was organizing a “read-a-thon” in support of MS.

“She wanted to do it to support me,” he explains. “She read over 100 books for the event, which helped generate several hundred dollars in donations to go towards funding MS research. It’s a very special thing to me. It really meant a lot.”

In 1983, OHSU established a Multiple Sclerosis Center and Mark began going there for regular care, but even they weren’t able to provide him with an aggressive treatment plan.

“They didn’t really have any drugs back then specifically for MS,” he says. “I guess when you’re given one option, you take it. Most of the doctors I went to told me they were learning from me.”

The road ahead wasn’t easy for Mark, especially with the adjustments he had to make in his life. His symptoms prevented him from returning to work. “I wasn’t able to do the things I expected of myself so I retired,” he explains.

Not only did this diminish his sense of purpose, it cut him off from the coworkers he had come to consider part of his family. “I feel like it also cost me my marriage,” he says. “She couldn’t deal with it and I also lost my relationships with her side of the family.”

Depression began to creep in, and Mark started drinking heavily and not taking very good care of himself. “I was in a bad situation for a while.”

In addition to the pain and disruption caused by the flares, Mark also experienced problems with his vision. At times it was just general blurriness, but at one point he was actually having double vision, brought on MS-related inflammation of the optic nerve, or optic neuritis.

Over the years, Mark took many different medications to treat his symptoms, several of which caused severe side effects, including bladder and bowel issues, as well as problems with his memory.

Mark tried attending some MS support groups in the Portland area, but found that he felt very uncomfortable being around some of the other patients. “Mainly because I’m ambulatory (able to walk) and 90% of the people there weren’t,” he explains. “I felt like they viewed me differently. Like they were judging me and I didn’t belong there.”

MS is one of many “invisible illnesses,” meaning that it’s a chronic condition that limits activity and requires ongoing care, yet doesn’t always cause symptoms that are obvious to onlookers. This can lead to feelings of frustration and isolation, something Mark is all too familiar with.

Things began to take a turn for the better in 1993 when Mark was invited to participate in a clinical trial for a new MS drug called interferon beta-1b. Now marketed under the brand name BETASERON®, the drug can reduce the number of inflammatory cells that cross the blood-brain barrier, leading to an overall reduction in nerve inflammation.

“It was pretty cool learning about what it was when it first came about,” says Mark. “They thought it was a good drug that might work for my symptoms.”

According to Mark, his symptoms haven’t progressed since his first injection of BETASERON®, although he has continued to experience Chronic Pain Syndrome and phantom pain (false pain signals from his brain). He gives himself a subcutaneous injection every other day, something the staff at the OHSU Multiple Sclerosis Center taught him how to do. He is very optimistic about current research efforts around MS treatment and is hopeful that there may be options available that can actually reverse the nerve damage he’s already experienced.

“Back then, the doctors were learning from what I was experiencing. With all of the research that’s taken place since then, now they’re able to offer people hope,” he says.

Mark has been trying to provide others with some hope as well. He recently attended an educational seminar for MS in Portland, where he spoke with a young woman who was newly diagnosed.

“She thought her life was over,” he says. “She had seen the same things I had seen before I was diagnosed and thought she was going to be in a wheelchair. I looked at her and said ‘I’ve had MS for 35 years – do I look like you expected?’ I saw the impact it had on her and thought, ‘If I could do that for other people, that would be great.'”

[tweet_box design=”default”]After living with MS for 35 years, Mark Tallman is optimistic about all of the new treatments on the horizon. Read about his journey:[/tweet_box]

He and a group of family and friends recently started organizing a team to participate in MS Walks that raise funding for National Multiple Sclerosis Society. This month will be the third year their team walks and they expect to have 24 people join them.

Since moving to Salem, Ore., five years ago, Mark has also made significant efforts to improve his quality of life through exercise and learning new things. He now goes to the gym five days a week, takes yoga classes, and spends hours walking Lakota, his eight-year-old black Labrador retriever.

Mark is interested in trying some of the newer therapies himself, but he and his neurologist agree that the circumstances would have to be just right, because he also suffers from heart arrhythmia. Although Mark is interested in transitioning from injections to a medication that comes in pill form, he’s hesitant to make the switch when his current regimen is working so well.

“You don’t want to fix something that isn’t broken,” he explains.

He encourages others to take an active role in their own care and to stay optimistic:

“Get a good doctor and pay attention to all the fantastic research that’s coming out right now. I’m so excited.”

Have you been affected by multiple sclerosis or another health condition? Sign up to share your experiences with Health Stories Project!