Why One Melanoma Patient Decided to Participate in a Clinical Trial

You would think that having all the answers, or at least some of them, would be a relief. That the old adage, “knowledge is power,” rings true regardless of the situation. However, when former operating room nurse, Christine Hanson, discovered she had stage III melanoma she wasn’t comforted or empowered by her years of medical training and experience. 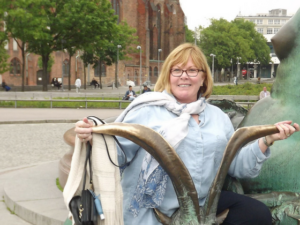 “It was gut-wrenching,” Christine explains, “because having been an operating nurse, and knowing about melanoma, I really thought it was my death sentence. Especially at stage III. The oncologist I originally spoke to after diagnoses basically told me to get my affairs in order.”

Medical experience didn’t lend Christine much solace, but it did give her a unique perspective on mortality and enabled her to take a huge leap of faith into the world of clinical trials. An experience, she says, she would happily repeat.

It all started when Christine noticed what looked like a colorless wart on her shoulder. It was there for a few months, so she decided to have it looked at. “Everybody thought it wasn’t anything,” Christine reflects, “but I decided we should have it removed.” That decision turned out to be a wise one because the results came back with a stage III melanoma diagnosis.

Christine didn’t need her oncologist to explain the seriousness of her predicament. She was now a patient in her own right, so she immediately started advocating for herself.

“I had to have further surgery. I was referred to the Mayo Clinic and the University of Iowa and my scans were sent to both places. Being a nurse, my instinct was to call doctors I knew and ask for advice on where I should go and who I should see.” Christine settled on the University of Iowa because Dr. Mo Milhelm was the vice chair of the NW Melanoma Consortium.

“After surgery it was a question of whether I’d do chemo or participate in a clinical trial. I opted to do the trial.”

Why participate in a clinical trial?

Clinical trials test medications or treatments that have not yet been approved by the FDA for general use. People participate in clinical trials for a variety of reasons. Some want to help others or contribute to scientific discovery. For those with a serious disease or illness, the possibility of receiving a new treatment and extra care is enticing. Christine’s decision was influenced by all of these factors.

At the time of her diagnosis, Interferon (a medication used to treat cancers like melanoma using the body’s natural defenses) wasn’t recommended and she had limited treatment choices beyond surgery and chemo. When presented with the chance to participate in a clinical trial, Christine thought it might be her best option.

“Sometimes it helps that I have a little bit more knowledge and other times it hurts me and I have too much knowledge. I know the reality of my life expectancy. I thought about the trial and wondered, ‘what do I have to lose?’ I knew that even if the treatment didn’t help me it could help someone in the future.”

So she went for it.

Clinical trials are carefully designed to safeguard the participants’ health and to answer specific research questions. The first step is determining eligibility. “In the beginning, they gave me paperwork to read and I met with the trial coordinator. I had to answer a bunch of questions to see if I was a candidate for the trial.”

They did a battery of exams on Christine including an MRI, eye exams, full-body CT scans, PET scans and more. The goal was to ensure she was a fit. Despite the “poking and prodding” Christine says she never felt pressure. The research staff was kind and informative and she also spoke with family and friends who encouraged and rooted her on.

During this time, she was also given details about tests, procedures, medications, and dosages and assigned a nurse with whom she could text and email any questions she had. She was informed that scientists have found a potential new way to fight cancer using Baculillus Calmette-Guerin (BCG) the germ commonly used to inoculate against tuberculosis (TB) and that she’d be part of a clinical trial testing this.

For the trial, Christine would need to go in once every two weeks for an injection of the TB vaccine. “You either got a full dose of vaccine, a half dose, or a placebo. You don’t know what you’re getting. I’d get an injection in both arms and both legs and my skin would react like a positive TB test. My legs and arms looked like I was covered with red welts. It’s a small price to pay. When you’re looking at your own mortality little bumps on your legs don’t mean a hill of beans.”

Placebos are not used if a patient would be put at risk particularly in the study of treatments for serious illnesses like melanoma. Still, the red welts made Christine hopeful that she was getting the real treatment.

As it turned out, her melanoma had metastasized and she had to go back for surgery. This also meant Christine was no longer eligible to participate in the trial, so they “unblinded” her trial treatment and revealed she was getting the placebo all along.

“I was disappointed, but if you offered me another chance at a trial I’d do it again. It’s the roll of the dice. Somebody is going to get the placebo.”

Life after a trial

Christine completed treatment for her melanoma reoccurrence in May of 2014 and has been “clean” ever since. Currently, there is no evidence of the disease in her system, and she fervently believes she made the right decision.

“If I can do something to help someone else I’m ready to step up to the plate and give it a shot. Especially if it’s not going to hurt me. I knew [the trial] might not help me, but it didn’t hurt me. I’m still here.”

Cancer has given Christine a new outlook on life. “In the beginning, I was devastated. I thought I’d never buy a new pair of shoes. Now I don’t care. If I want them I’m buying them.” She is living life to the fullest and not letting stage IV stop her. She and her husband both retired early after her reoccurrence. Since finishing treatment she’s traveled to Alaska, Europe, and is even planning a trip to Ireland soon.

She’s now back volunteering at the Surgery Center picking cases and escorting patients. Recently she also worked with a surgical oncologist to spread awareness of the dangers of tanning beds. “I went to the high school with a surgical oncologist and he did a graphic presentation before prom. I was wearing a sleeveless dress with a sweater and took it off to reveal my scar. I used a tanning bed when I was younger. I probably did this to myself.”

Christine has truly lived a good life and continues to exploit opportunities to live, help others, and even further science when she can. Working as a nurse imbued her with a positive attitude and a desire to pass on her good fortune.

“I don’t let my cancer define my life. I refuse to let it win. I have anxiety and blue days, but I try to stay upbeat and I enjoy my life. Nobody is getting out alive, and for me life is more precious. It woke me up a little bit. We are doing things we might have put off had this not happened.”

Clinical trials are an important part of developing new medicines – you may have seen ads for them or even participated in one yourself.

No matter what your experience with clinical trials, we want to hear from you! Your feedback is valuable and can help shape future research. Sign up to share your experiences with Health Stories Project!