Looking on the Bright Side of Macular Degeneration

The day Patsy Schuchardt noticed that every car in the parking lot had a flat tire, she knew something was wrong. Not with the tires – they were actually fine – but with her sight.

A few months earlier, Patsy had noticed her vision starting to slip. She’d been talking with a painter about trim on her house, and when she looked up at the trim, it wasn’t a straight line. “It was all wavy,” Patsy recalls. 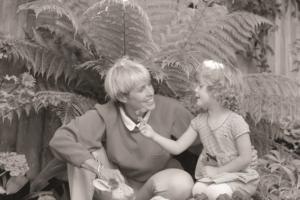 After that first incident of distorted vision, Patsy visited her ophthalmologist at the University of California, San Francisco (UCSF) medical center. He had noticed drusen, yellow lipid deposits, at the back of her eye-a fairly common occurrence as people age. He recommended Patsy start taking vitamins and that they closely monitor her eye health through regular check-ups. But when Patsy called him a few months later to tell him about the “flat” tires, he recommended she come in to the ophthalmology clinic right away for further testing.

At the clinic, they did a test called fluorescein angiography where they injected fluorescein dye in her arm in order to take photographs of the eye as the dye passed through the retinal blood vessels. It took a few days to confirm Patsy’s diagnosis: age-related macular degeneration (AMD).

So what is AMD?

AMD is the leading cause of vision loss among people in the United States. It occurs when the central portion of the retina, called the macula, deteriorates. This affects vision – and by extension, the ability to see and recognize objects or people and do common, self-sufficient tasks such as reading or driving.

In Patsy’s case, her doctor diagnosed two types of AMD: “wet” AMD in her right eye and “dry” AMD in her left eye. The dry form is the most common type of AMD, characterized by thinning of the layers in the macula. Wet AMD occurs when blood vessels leak fluids, lipids, and blood into the macular layers of the retina, causing scar tissue to form and retinal cells to stop functioning.

Risk for developing macular degeneration increases after age 55, with genetics, environment, and lifestyle also playing a role. Patsy’s own risk factors included age – she was 62 when she was diagnosed – and heredity: her mother had macular degeneration and also glaucoma, another eye condition.

At the initial time of her diagnosis, Patsy says there weren’t a lot of treatment options for AMD. Blindness was not an immediate cause for concern: “My vision was OK – it was wavy, but it was OK.”

Patsy participated in clinical trials for treatments such as Lucentis (ranibizumab injection), in which shots are administered to block the production of a chemical called vascular endothelial growth factor, or VEGF and thereby slowing the growth of the blood vessels that leak into the eye. The treatments were effective for the right eye with wet AMD, but may have caused the cataract that developed in that eye. Now Patsy wears a contact lens to improve her long-distance vision in the right eye. The Lucentis shots are not an option for dry AMD, so Patsy’s left eye is “pretty useless,” according to her.

Patsy speaks warmly of her physicians at UCSF Ophthalmology, Dr. Brooks Crawford and Dr. Jacque Duncan, and credits them not only for their medical expertise but also for the care and encouragement they give.

“I think I’d be the worst blind person in the world, but Jacque tells me, ‘no, you’d be fine – you’d be amazed at how well people can adjust to losing vision.'”

Adjusting to Life with AMD

Patsy’s lifestyle has always been vibrant and active, and she has not let macular degeneration slow her down. A self-described outdoor person, her regular activities at her current age of 74 might leave others breathless: golf, running, mountain biking, and spending time with her grandchildren.

But she has made some adjustments to her lifestyle because of macular degeneration.

[tweet_box design=”default”]”It’s ok to cry at the diagnosis but then you have to get on with your life and realize all the good things that you have.” – Patsy, #AMD[/tweet_box]

In addition to affecting daily life, AMD has an emotional impact, too.

Patsy often has trouble recognizing people she knows until they are very nearby. Her friends sometimes try to make light of it when Patsy tells them she has an eye condition. “They say ‘oh good, then you won’t see my wrinkles,'” she recalls. “Give me a break.”

Patsy adores her grandchildren and finds it hard that she can’t see well when attending important events like her granddaughter’s musical performances or her grandson’s basketball games. “I see a person running up and down the court when someone points him out, but I can’t see him.”

As she loses more eyesight, she also faces the fear of being less independent and self-sufficient. “My husband had to pick me up at the hospital the other day. I told him I’d take a cab, but he wanted to pick me up,” she recalls.

“Sometimes that’s the hard part – letting people help when they want to.”

A Chance to Help Lead the Way

Patsy has channeled her can-do attitude into helping others affected by eye conditions. For nearly 10 years, she has served on the Board of Directors for That Man May See, a nonprofit foundation which supports the vision of UCSF Ophthalmology: to save and restore sight for present and future generations. Patsy helps to raise funding for vision research at UCSF, thus giving back to the medical researchers and clinicians who have done so much for her.

Patsy admits that when she initially learned about AMD, it was scary. She spent the day in tears after first getting the diagnosis.

“I thought I’d get cancer, break a leg, something, but I never thought I’d go blind. I had perfect vision – I could read street signs from a mile away. Then all of a sudden I couldn’t.”

But Patsy has faced other devastations in the past and learned to move ahead. Her first husband died in a plane crash, leaving her with a 4-year-old daughter to raise. Despite initially feeling like it “was the end of the world,” Patsy developed a new capacity for endurance and survival. “I said, ‘You can give in, or you can be a mother to your daughter.'” Patsy did just that, later remarrying and adopting a son.

This spirit to survive and thrive has served Patsy well and it’s the hallmark of her outlook on her active, full life. For others who are dealing with AMD, Patsy offers up these reflections based on her experience:

“It’s ok to cry at the diagnosis but then you have to get on with your life and realize all the good things that you have.”

Have you been affected by Age-related Macular Degeneration (AMD)? Sign up to share your experiences with Health Stories Project!

Sally was a Program Director at Health Stories Project, where she managed services and platforms to help people connect and share about their personal health experiences.
View all posts by Sally Collins →

6 responses to “Looking on the Bright Side of Macular Degeneration”