U.S. Immigration Ban Takes Effect: Will Your Healthcare be Impacted?

On December 4, 2017, the Supreme Court approved the third version of the president’s travel ban to go into effect while legal challenges continue to be heard in the lower courts. Intended to protect the U.S. from the threat of terrorism, the regulation may also have unintended impacts on other aspects of life in America, including healthcare. This post explores what effects the ban has already had on healthcare and considers what might happen going forward.

“I can’t even imagine what medicine would look like without foreign-born doctors.”

In the current version of the ban, most citizens of Iran, Libya, Syria, Yemen, Somalia, Chad and North Korea cannot enter the United States, along with certain people from Venezuela. Citizens of the eight countries will be largely unable to emigrate to the United States permanently as well as work, study or vacation, though restrictions vary country to country. 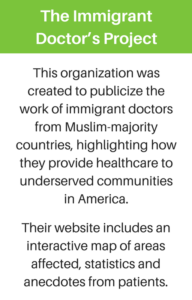 Since immigrants from Iran, Syria, Libya, Yemen and Somalia make up an increasing proportion of doctors in the U.S., many healthcare stakeholders are concerned how big the impact could be. According to Medicus Firm statistics cited by The New York Times, more than 15,000 doctors in the U.S. are from the first seven countries listed in the ban.

Even after this influx of foreign-born physicians, a shortage of doctors still plagues many areas, particularly rural communities, lower income urban centers and Veterans Affairs hospitals. According to The New York Times, approximately 25 percent of doctors (practicing or training) in the U.S. are foreign. However, this percentage is much higher in some inner cities and most rural areas, primarily due to the practice of allocating foreign-born doctors to areas the Department of Health and Human Services deem underserved as part of their visa extension following residency. It is unknown at this stage whether a visa lawyer will be able to secure their stay at this moment in time.

Nationwide, shortages mean doctors have to accept a larger number of patients. It can also lead to doctors being overworked, as they must be on call more often, ultimately leading to diminished patient care.

Some applicants expressed reservations about beginning the long process of applying for residency in the U.S. if they would ultimately be blocked by another variation of the immigration ban, something that worries the head of the University of Toledo’s neurology department, Dr. Gretchen Tietjen.

Speaking with ProPublica, Tietjen said, “I can’t even imagine what medicine would look like without foreign-born doctors.”

“More than 90 percent of IMWG members are foreign-born immigrants.”

Universities, the tech industry and medical organizations – including the American Society of Clinical Oncology, The American Medical Association and the International Myeloma Foundation (IMF) – have also identified ways the immigration ban will affect their ability to move forward on medical research aimed at improving care.

Dr. Brian Durie with the IMF, published an article on the organization’s website noting that globalization is necessary for progress in fighting cancer. Durie is a member of the International Myeloma Working Group (IMWG), a diverse 200-member collection of researchers.

“In the face of this immigration and travel controversy,” Durie wrote, “it is important to note that more than 90 percent of IMWG members are foreign-born immigrants to the United States or reside in 35 other countries around the globe.”

The New York Times further reports that the ban could prevent U.S.-based foreign researchers from making short-term trips to attend conferences and scientific meetings as well as restrict foreign scientists to travel to the States for similar events.

“I voted for Trump, but there is no way I’m going to let him take you away, doctor!”

Political affiliations aside, everyone in America is a patient at some point. With an increasing number of immigrant doctors practicing in the U.S., the effects of the ban touch everyone.

In a response to the original executive order, The New England Journal of Medicine published an article arguing, “Immigrants have made a long list of contributions to the U.S. health care system and to science in general – achievements that transcend country of origin, as well as religion, race, color, ethnic background, gender, and sexual orientation.”

The authors further noted that, since the bans, “There has been pandemonium among residents, fellows, and GME [graduate medical education] offices throughout the country. It has created much uncertainty.”

It’s not surprising therefore, that concern about the availability of physicians has trickled down to the patients they serve. According to the same article in The New England Journal of Medicine, one patient with a foreign-born doctor said, “I voted for Trump, but there is no way I’m going to let him take you away, doctor!”

“I do develop a relationship with my patients. I keep calling them back over the phone even after they leave the hospital to make sure that they’re doing all right.”

Considering this, it’s likely that the disruption of medical service from the travel ban has affected patients directly.

When the ability to hire foreign-born doctors is at risk, hospital costs increase and patient care decreases. Speaking with The New York Times about an unrelated constraint added to H-1B visas, Montana’s Benefis Health System reported it would have to give other doctors additional shifts or hire expensive temporary physicians to make-up for the loss of immigrant doctors. This practice is specifically discouraged, because it inhibits rapport between patients and doctors when the latter are transient.

In a podcast interview with The New Yorker, Dr. Ali Fadhil, an Iraqi native who practices in the state of Georgia, noted, “I do develop a relationship with my patients. I keep calling them back over the phone even after they leave the hospital to make sure that they’re doing all right. Especially the ones that are really sick.”

Fadhil also noted that the majority of doctors at his hospital are immigrants. For Fadhil’s hospital and many others, such immigration restrictions will likely have real effects on the doctor-patient relationship.

In a statement addressing the proclamation, Association of American Medical Colleges (AAMC) President and CEO Darrell Kirch acknowledges the concessions made for healthcare but notes, “highly qualified aspiring and practicing physicians and scientists may still face barriers to entry, including potentially inconsistent waiver decisions.”

Kirch asked the administration to make further exceptions for medical students, medical residents, physicians, and scientists as well as those attending medical and scientific conferences in the United States.

Regardless of the details of the current version of the ban or changes that may be made to accommodate health professionals, the past year has raised concerns among foreign-born doctors about the security of practicing medicine in the U.S. If this leads to fewer doctors choosing to practice here, it’s clear that the quality of healthcare will be affected.