Failing Organs, a Pacemaker and COVID-19: “It Can Always Be Worse”

Jenny had a pacemaker implanted before she was 40 years old — and that was after experiencing multiple other serious health issues. Since then, she contracted COVID-19 and dealt with long-term symptoms. Given these challenges, Jenny’s survival surprised her as much as the severity of her conditions. Here she shares an overview of what she’s endured and some insights on how others might do the same.

One Thing After Another 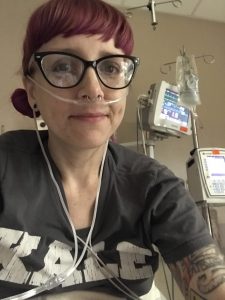 I had sepsis three times, septic shock with liver failure and a pulmonary embolism with massive infarction (lung death) all within a short amount of time. Doctors were pretty baffled I survived once, much less any of it. Then the extremely high heart rates began, and overwhelming pain stepped in.

Once I sought out genetic testing and was diagnosed with Ehlers-Danlos [syndrome], I was relieved, as it answered a lot of questions about my body. My specialists could work together to figure out what the next steps were.

The first priority was to get my heart under control. I was almost unable to move without a spiking heart rate to 200

beats per minute. If I went from sitting to standing, my heart would jump 70 beats, a condition called POTS (postural orthostatic tachycardia syndrome). [That was] on top of the inappropriate sinus tachycardia and the superventricular tachycardia. I was a hummingbird in a human body.

We started with a cardiac ablation to try to permanently slow my heartrate down. That failed, and slowed it down too much, and I was now bradycardic, with a constant heartbeat in the 30s-40s, now fainting. I had zero energy and felt dizzy constantly.

[The] next step was a pacemaker. I wasn’t even 40 years old, so this felt very odd to have a pacemaker implanted. It was set to never let my heart drop below 60 beats per minute, and works like a charm.

Then the tachycardia came back! The hummingbird heart rate was back, so I was back in surgery for a second ablation, and this worked!

During the second ablation hospital stay, I caught COVID-19. I’m telling you, my bad luck is impeccable.

I had a textbook case for a straight month and [then] severe symptoms began to lift, but I found myself with lingering symptoms, as some patients do. I began to worry, as I’d had fever for three straight months. I was incredibly weak and the physical pain was overwhelming. The shortness of breath never left.

[As of this writing] at day 211, [I] still [have] a daily low-grade fever, shortness of breath, dry cough, weakness [and] the pain keeps getting worse, to where I’m using a walker or wheelchair.

My biggest support was and is my husband. He’s been my at-home nurse, and had to go quickly from husband to caretaker, as all of this fell into our laps.

Listen to that body of yours. One day, I knew something wasn’t right and like some sort of tower of wooden blocks, my body has weirdly tumbled down.

I remind myself it can always be worse. I’ve survived sepsis three times, septic shock, liver failure, pulmonary embolism, three heart surgeries, a pacemaker, Ehlers-Danlos, COVID [and] now [I’m] a COVID long-hauler. I have no idea what my body is thinking. Or why it survived all of this.

Educate yourself about your conditions and always ask questions. You have to be the expert and the advocate of your own health.

If you’ve been diagnosed with pulmonary embolism, consider sharing your story.