From Shoelaces to Foot Races: How Autism Helped Colleen Johnson Become an Ultra-Marathoner

Colleen Johnson is not your average 61 year old.  In a little less than 4 years, she went from being an overweight, arthritic, type 2 diabetic with a rare form of cancer to becoming an ultra-marathoner and cancer survivor. You may have even read about her dramatic weight loss,  running milestones, or cancer survival story as she’s been featured in several noteworthy publications including Runners World magazine. But one thing the media doesn’t often talk about, is that Colleen is on the autism spectrum and she credits much of her success to her atypical brain.

“There is a strength that comes with autism,” asserts Colleen, “It’s not all negative.”

From struggling with shoelaces to running in foot races

As a child, Colleen was not especially aware of her differentness, but she does remember being very clumsy and ostracized because she was socially awkward. Back then (the 1960’s, to be exact) autism wasn’t a widely known condition.

“I was diagnosed at eight years old, in 1963, by what at that time was called the LSUNO (Louisiana State University in New Orleans) Special Ed department. 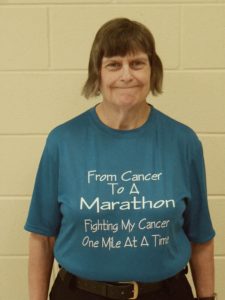 Stigma and unanswered questions aside, Colleen was able to thrive with her condition. In a story that mirrors Temple Grandin’s, Colleen’s life would have been completely different had it not been for one remarkable teacher. Ms. Hemard, Colleen’s sixth grade teacher, tried teaching Colleen using methods that were different from most teachers. She helped Colleen tackle motor skill problems and learn basic social skills that she would carry her throughout her life. In fact, Colleen credits the extra time spent with Ms. Hemard as the catalyst for her transition into the honor roll student she was meant to be.

At first, Colleen had trouble with understanding the sometimes abstract and unspoken classroom rules. So, Ms. Hemard put Colleen in a desk in the front row of her classroom which helped Colleen better watch and pick up on social cues from her fellow classmates.

“It helped me to physically be able to see how other children in the classroom were behaving, so that I could learn by imitating their example.  When I was stuck in the back of the classroom (as all my previous teachers did), all I ever saw was other kids backs. “

Ms. Hemard also listed classroom rules and etiquette out for Colleen, worked with her until they were understood, and developed a non-verbal system for helping Colleen stay on track.

“She actually penciled in proper classroom behavior in bullet list form on a sheet of paper and gave it to me, so I would know exactly what she expected of me.  But then, she realized that it takes time for a kid like me to internalize those behaviors, so she used a simple method of tapping me on the shoulder to help me know what to do (or not do) when.”

Colleen’s autism also lead to physical clumsiness and motor skill problems which she now understands is called dyspraxia. According to Understood.org, dyspraxia is “a brain-based condition that makes it hard to plan and coordinate physical movement.” It can have a big impact on many everyday tasks and activities including gripping a pencil, speaking, and tying one’s shoes. Which is exactly what Colleen experienced at a young age. Luckily, a teacher had the answer for that too:

“I was ahead of my class in math and I couldn’t tie my own shoes. My teacher figured it was time to learn to tie my own shoes because I wouldn’t ask anyone to tie them for me, I’d just trip on the laces. So, she got a big shoe with big laces and held me back at recess to help me learn how to tie my shoes. Every day she worked with me.”

A little extra time spent by educators made all the difference for Colleen.

That said, extra support from her teachers was not enough to protect Colleen from feeling as if she couldn’t participate in sports. As an adult, running has been an amazing outlet for Colleen and she wishes she had discovered it as a child. In fact, she actively encourages all children with autism to get out and run. In addition to the physical and health benefits it’s a sport that even clumsy people can do.

“If you can move your legs you can run. You don’t have to have any special skills. You don’t have to be coordinated. You may not be fast. I run slower than a turtle wading through peanut butter, but most of the races nowadays are being structured in such a way that even slow people can run them.”

The strength of autism

Though she is retired now, Colleen stresses how important it is for individuals with autism to find their unique strengths, and she is not alone when she asserts that employers would do well to look closely at job applicants with autism. Their special skills and unique personalities can often provide the employer with abilities not easily found among their more neuro-typical job applicants. In fact, once Colleen better understood the ins and outs of classroom etiquette, she blossomed in academia.  What she lacked in social skills, she made up for with her unique abilities in quantitative research design and statistical analysis.  This led to a job as a professor at the University of Memphis.

Colleen’s unique mind and background in research and statistics paid dividends when, at age 57, she was diagnosed with an uncommon, aggressive, and deeply invasive form of endometrial cancer.

“The surgeon removed a 2 pound solid tumor from my abdomen, the approximate size of a cantaloupe.  Because of the unusually aggressive nature of my particular cancer cells, I was given only a 20% chance of living 5 years. “

It was at that point Colleen began to do her own research.

“I soon found a huge amount of scientific research that suggested that losing weight, eating a healthy diet, and engaging in a regular, vigorous exercise program can slow the return of many cancers – even aggressive cancers like mine.”

So, Colleen took the next logical steps. She saw an oncological nutritionist, a physical therapist, and she started making slow, steady progress with weight loss and running.

Less than a year later, she signed up for her first 5K race. Ever since, she’s had a veritable laundry list of accomplishments including:

Running has also afforded Colleen with the unique opportunity to practice and engage with others socially. She quickly noticed that at races no one seemed to notice (or care) that she is autistic. In fact, the Memphis Runners Track Club invited her to be a volunteer coach. She says.

“Most of the folks out there at our practices don’t even know I’m autistic.  Everybody has some trouble speaking when they are running hard!” 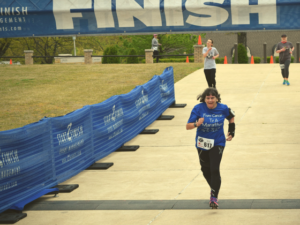 Running into the future

“In any given year, you can count the number of 60-something year old ladies who complete a 100 mile race on your fingers, and still have enough fingers left to eat some Kentucky fried chicken!”

This year Colleen plans to be among that elite few, and she’ll do it despite arthritis in both knees, asthma, and diabetes.

On Labor Day weekend, she is going to do the 2016 Race for All Ages ultra-marathon in Manchester, Tennessee, where she will have 61 hours (one hour for every year of her life) to run a certified 1-mile loop as many times as she is able to do it.   Most runners would eventually get bored – running and rerunning the same one mile loop over and over again – and would end up quitting early out of sheer boredom.  But Colleen actually prefers races like that.

“My goal is to successfully run or walk 100 miles before noon on Labor Day, when the race officially ends.   And the reason I will be able to do it – even though I am not younger or healthier – is BECAUSE of my autism.   Not in spite of it.

Autism is not a disability.  It’s an ability!”

Have you been affected by autism or another health condition? Sign up to share your experiences with Health Stories Project!