This is the second of two planned articles detailing gendered experiences in the American healthcare system. Click here to read Part 1. If you would like to share your health experiences, please sign up here.

While the transgender community has gained greater visibility, being agender—identifying as neither female nor male—is less commonly known. Within the healthcare sphere, this lack of awareness can complicate securing quality medical care. Cass* age 32, has long found this to be true as someone balancing routine health needs with being agender in the American healthcare system.

“When you get the little line that says, ‘male or female?’ my answer is ‘not so much.’”

Cass works as a teacher in early childhood special education in Washington D.C. and lives with zir spouse of 10 years. Ze identifies as agender, and zir pronouns are ze, zir and zirs.

The pronouns ze, zir and zirs (pronounced zee, zear, zears) are preferred by some who do not identify as either female or male, like Cass. 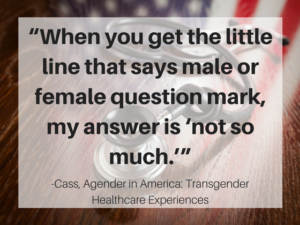 For most of zir adult life, Cass has identified as agender. Someone who identifies as agender does not identify as a man or a woman but instead expresses themselves as gender neutral.

“For me, a binary definition of gender isn’t applicable. When you get the little line that says ‘Male or Female?’ my answer is ‘not so much,’” Cass says with a laugh.

Cass has been agender since before ze “knew agender identity was a thing.” Although ze did not know the term, being “female” never felt quite right. This was especially apparent to Cass during routine doctor appointments.

“Even as a teenager, I knew some of the things doctors were suggesting didn’t fit,” Cass remembers.

This was mainly due to doctors equating Cass’s health with zir perceived “female” gender instead of focusing on Cass’s legitimate medical needs.

“I would express something I was uncomfortable with [to a doctor], and I would be told I would get used to it,” Cass remembers with irritation. “I was treated as a teen for really bad cramps, and when I mentioned I would prefer to shut the whole system down [hysterectomy], they told me ‘No, no, no, you’ll get used to it. This is part of being a girl.’”

In zir early 20s, Cass learned of the term “agender” for the first time.

“Before then, I identified as ‘gender is not a thing that applies to me.’ I didn’t have a term for it. And then eventually I ran into the term [agender], and I was like, ‘Yes!’” Cass exclaims.

“Doctors really wanted to put me on estrogen so I could have kids. It was always the presumption. I was never asked.”

For most of zir adult life, Cass consistently had to confront doctors who made inaccurate presumptions about zir healthcare choices.

“I have some hormonal issues that are just part of who I am,” Cass shares. “Apparently standard treatment for them is hormonal therapy to align it with what is ‘normal’ for females. And I had to explain to doctors that I don’t want to be ‘female.’”

In Cass’s case, doctors’ description of “normal for females” meant changing Cass’s body to increase zir chances of being able to have children.

“They really wanted to put me on estrogen so I could have kids. It was always the presumption. I was never asked. I repeatedly found hysterectomy discussions weren’t going anywhere,” Cass recalls with frustration.

For years, Cass continued to struggle with hormonal imbalances because doctors would not present any other options apart from estrogen therapy.

“They would admit there were other options, but wouldn’t say what the other options were,” Cass relates with exasperation. “They just wouldn’t understand that what they were suggesting didn’t work for me.”

Ignoring Cass’s protests, doctors persisted in recommending estrogen therapy. But Cass had already tried estrogen, and knew it was not the best medical choice for zir quality of life.

“I had been on hormones previously, and I knew I would end up on larger and larger doses. And it really messes with my mental health, so it was not a road I wanted to head back down, unless there was a serious, ‘You’ll die if you don’t reason,’” Cass explains.

The issue came to a head in 2014 after Cass was misdiagnosed because doctors did not listen to zir.

“I had kidney stones. But doctors thought I was having a miscarriage. And they were so fixated on that I think it took them longer to realize it was kidney stones, because they just would not hear me when I said there was no way I was pregnant,” Cass remembers.

Despite Cass’s assertions, doctors seemed unable to comprehend that Cass was in an exclusive relationship with zir female spouse, rendering pregnancy impossible.

“I kept saying, ‘I know how babies are made. I know that’s not what this is.’ At first, they ran pregnancy tests without asking me, and sometimes there would be false positives. And that was upsetting to me, because I’m not a girl,” Cass explains.

The experience felt like a violation to Cass, and ze decided to seek new medical care afterward.

“I was upset, they ran [pregnancy tests] without telling me, and I left the doctor’s office over that issue. That and the whole assumption that my body was for procreating and that was the point of it. That was problematic and triggering in the dysphoric type of way,” Cass muses.

Trading Up for Better Care

“When I was looking at their website, I saw they had a page for people who have gender that is non-binary.”

After the arduous “pregnancy-that-wasn’t” experience with zir previous doctor, Cass decided to try to find a new provider who would be better suited to providing non-binary care. A friend of Cass’s who identifies as genderqueer recommended one provider, so Cass looked at the website and was impressed with what ze found.

“When I was looking at their [website] page, I saw they had a page for people who have gender that is non-binary. They said they were open to everything,” Cass clarifies. “They’re trained in how to handle gender identity.”

“Once I found a doctor who listened to me, I learned there were lots of [treatment] options,” Cass rejoices. “I told them I didn’t want a regular [menstruation] cycle, and so we were able to find a treatment that worked for me.”

This time when Cass talked about the possibility of hysterectomy, zir doctor’s reasoning for suggesting otherwise was not focused on childbearing.

“We did discuss [hysterectomy] as an option. It was the first time a doctor asked me more,” Cass says. “She asked me what made me uncomfortable and suggested that, given what I was expressing discomfort with, she thought it would be less invasive to get an IUD [intrauterine device]. It wasn’t invalidating why I wanted it done. It was just a way of treating based on my reasons.”

Ultimately, Cass did pick the IUD, considering the cessation of menstruation an “added bonus” and happy with zir choice. It was a relief to Cass to find a doctor who finally understood zir point of view.

“I explained to my doctor that I would hear as a kid, ‘You’ll get used to your cycle,’ but my new doctor assured me that if I wasn’t comfortable with it at 30, I probably would never be. And that was really affirming,” Cass shares with relief.

In addition to finding long-sought care for zir hormone imbalances, Cass also learned more about what constituted a healthy weight for zir. Prior to seeking out new care, Cass had often been told ze was obese.

“The norms [doctors] have for weight are a very gendered standard. I’m active and eat healthy, and I knew I was overweight, but I knew I wasn’t as unhealthy as they were saying,” Cass explains.

With zir new doctor, Cass discovered that ze was “heavier” than ze should be, but was still in a healthy, acceptable range. Ze has higher levels of testosterone that increased zir bone and muscle mass, thus increasing Cass’s weight. The standard “female” weight range therefore did not fit Cass and was not an accurate measure for zir.

“It was the difference between being obese and overweight,” Cass says of the change between healthcare providers. “[New doctors] looked at my hormone levels and my scales and said they should expand the range.”

With this clarification, Cass found a nutritionist who provided more targeted and practical advice.

“I found a nutritionist who was aware of [the testosterone] and weeded out the ‘we need to fix it’ mindset, which was much more helpful,” Cass says.

How to find—and provide—quality care

Based on zir experience with healthcare, Cass has a few pieces of advice for other non-binary patients.

“I’ve found the paperwork [at doctor’s offices] tends to be a huge tip,” Cass shares. “If the gender answer is an open line, they know there’s more than one option. If it’s still male or female, then they’re not up to date.” 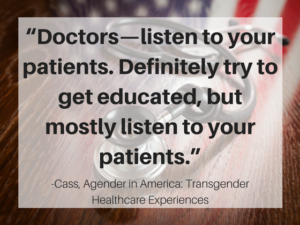 Additionally, Cass encourages people to maintain and utilize a social network of other like-minded individuals.

“I am fortunate that I have a social network. So, the first step would be to ask and see if anyone had a doctor they liked. In most metropolitan areas, there are [gender] community centers,” Cass explains.

Ze also recommends trying to find a provider who is more than just “versed in gender.” These providers can still be locked in to the gender binary.

Finally, Cass encourages others to not give up, even when faced with poor medical care.

“And keep looking, because you can find folks who are competent out there,” Cass says reassuringly. “I think a lot of people assume there isn’t someone for them.”

And for the doctors themselves, Cass does not think they all have to be experts, but they do have to listen.

Your health story has the power to change lives – want to share? Sign up here. We’ll notify you about opportunities that match your interests.