20 Insights on Diagnosis from People Living with CRPS

We deliver new health stories each week! –> Get stories by email

“In an instant my life changed forever. A simple fall. I just didn’t realize I was in for the fight of my life.” – Melissa, patient living with CRPS

Complex regional pain syndrome (or CRPS) is a complicated, chronic, pain condition that usually occurs after injury or trauma to a limb. Although it is not life-threatening, CRPS offers many challenges that affect all parts of the sufferer’s life. For many, one of the biggest challenges is diagnosis.

According to the National Institute of Neurological Disorders and Stroke, “CRPS is believed to be caused by damage to, or malfunction of, the peripheral and central nervous systems.” People suffering from CRPS can experience chronic, prolonged pain, changes in skin color, temperature change and/or swelling in the affected area.

Though the definitions seem pretty straightforward, getting a CRPS diagnosis usually isn’t. Currently, doctors aren’t sure what causes some individuals who experience traumatic injury to develop CRPS and there is no single diagnostic test to confirm it. As a result, the pathway to treatment can be long, varied, tedious, and frustrating for many.

We wanted to better understand what diagnosis is like for people living with CRPS, so we asked patients in our community to share their experiences. Here’s what they had to say:

CRPS can be caused by a whole host of injuries.

A car crash, a crush injury at work, or even a fall… it may not be surprising that CRPS can happen after any traumatic injury that might require support from a personal injury attorney like https://valientemott.com/ to file a claim. A work injury especially one which leaves an employee severely injured could lead to a major insurance claim and this would require the expert intervention of not only a personal injury lawyer, but also an insurance company that specializes in these claims such as the ICW Group and similar others!

However, it can also happen after other minor or major health events, including routine surgery, infection, amputation, heart attack, or even a sprained ankle. 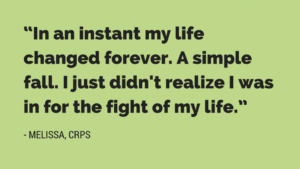 “I lived with pain in my foot, following surgery, for two and a half years. I then had a fall and tore my shoulder. Following surgery my pain was too high and my recovery was slow. My specialist sent me to a pain specialist who was amazing. She ran through a lot of CRPS symptoms. I could relate to so many with the pain in my shoulder, however they also matched what I lived with in my foot. So I had a diagnosis of CRPS in my shoulder/arm and my foot.” – Jo

“I had a neck surgery and about three months after is when my health took a turn for the worst.” – Brenda

“After I had surgery on my foot twice, the pain just didn’t go away.” – Anonymous

“I was first diagnosed in 2005 with CRPS in my right calf/ankle, and luckily I was at a pain clinic and they recognized it fairly quickly. In 2015, I developed CRPS in my left knee, and it was diagnosed quickly as well.” – Eden

“After a bilateral crush injury to my arms, I went 3 very long years without a diagnosis. Many doctors said there was nothing more they could do for me. I was a single mum of a 2 year old at the time of the accident.” – Anonymous

“I had surgery on my hand, and developed CRPS during the recovery process.” – Marie

Most CRPS patients we interviewed found it difficult to get diagnosed. Those who didn’t describe themselves as lucky.

The path to CRPS diagnosis isn’t always direct, and patients can be diagnosed in numerous ways. Among those we interviewed, 25% mentioned the word “difficult” when speaking about their CRPS, and even more found the diagnosis experience frustrating. There were a few, however, who met with the right doctor(s) at the right time: 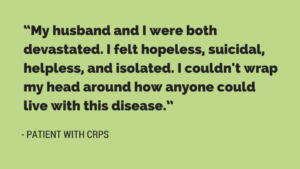 “I am one of the very lucky ones. I was actually diagnosed within 2 months of injury. My PCP had no idea what was going on with my foot and thought I had a stress fracture. He kept taking x-rays every week for 6 weeks. He also had me on crutches and confined to bed. My mother-in-law got frustrated and took me to her orthopedic doctor. He picked up on the circulation problem, the atrophy that had started, and the x-rays showed bone change. I was diagnosed that day.” – Robin

“It helped that my case is about as textbook as it can get. I did get bounced around to several doctors until finally workers compensation accepted the diagnosis of CRPS. If you need to contact someone about a workers’ comp claim, you may want to check out companies like FFVA to help you get what you need. Anyway, once they accepted the diagnosis, they finally sent me to a specialist for treatment. That process took about a year and a half. Had I been going through personal insurance, I would have been able to begin appropriate treatment much faster.”- Leigh

“I was very lucky I have a doctor who is very familiar with CRPS, so he knew exactly what it was right away, getting my treatment started immediately.” – Suzanne

“In my case, the specialist who diagnosed me is well aware and educated about CRPS. [Diagnosis] was easy as my specialist is well informed of the clinical presentation and symptoms of CRPS and I will consider myself lucky as I was diagnosed early. The inky issue was my GP who was totally not educated and refused to educate herself, leading to several trial and errors in prescribing the right pain medications and thinking that the pain was all in my head.” – Lou

CRPS patients face a lot of doubt and disbelief (even from medical professionals).

“It’s all in your head,” or “You’re making it worse by worrying about it.” Patients with chronic pain hear these phrases a lot. While it’s true that emotions can sometimes take on physical side effects, it’s frustrating and scary when a doctor dismisses your experience or can’t diagnose you properly. Unfortunately, for patients with CRPS, this experience is all too common: 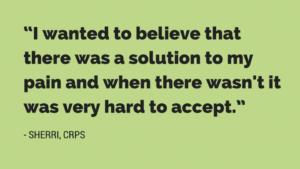 “Problems began when [I was] passed on to multiple professionals who had no experience with CRPS. Some actually didn’t even believe it was a real condition.” – Anonymous

“It took six years and I actually had to diagnose myself and then go see a specialist to confirm that I had diagnosed myself correctly. Even after I had the neurologist’s diagnosis, my GP did not believe it nor did my pain specialist. The pain specialist then did some extra testing of his own and came to the same conclusion that I definitely have CRPS.” – Stuart

“[Diagnosis was] difficult. Several doctors didn’t even know about the illness.” – Laura

“I went to over 30 doctors to confirm I had CRPS.” – Anonymous

“It took me 3 months to get a diagnosis. I had 3 very painful X-rays done and saw 4 different doctors. One of those doctors basically told me it was in my head and there was nothing wrong with me. I was on crutches and in a boot that entire 3 months and had to learn how to walk again. It finally took a doctor listening to me and an MRI to be diagnosed.” – Charlene

Physical pain caused by CRPS can lead to depression, suicide ideation, and feelings of hopelessness

Denial, anger, bargaining, depression…. CRPS is more than just pain. It takes a huge emotional toll. Many people describe journeying through a chronic pain diagnosis like going through the 5 stages of grief. 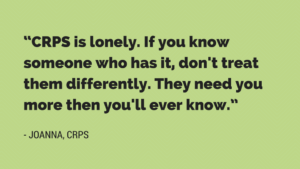 “I cried, my husband cried, and we both understood why we were asked to wait for a diagnosis before doing any research. My husband and I were both devastated. I felt hopeless, suicidal, helpless, and isolated. I couldn’t wrap my head around how anyone could live with this disease. I still can’t and I continue to feel so much pain, hopeless, helpless, isolated, and suicidal.” – Anonymous

“I wanted to believe that there was a solution to my pain and when there wasn’t it was very hard to accept.” – Sherri

“By the time I met the doctor who diagnosed me, I hadn’t slept in 3 years and was considering suicide. The doctor recognized my symptoms immediately. That same week, she lost a patient with RSD [Reflex Sympathetic Dystrophy] to suicide and as soon as she met me, she made it a mission to get me relief. I would likely be dead without her support.” – Anonymous

“One of the hardest parts about having CRPS for me is the guilt. I am constantly feeling guilty about the burden that I put on my wife and daughter. I feel guilty about needing help to do the simplest things and about not being able to do all the things I used to be able to do. It’s also incredibly difficult to process my thoughts like I used to be able to do. It takes me much longer than it used to and sometimes I need help finding common words. It can be very frustrating to not be able to easily get my thoughts out.” – Leigh

“CRPS is lonely. If you know someone who has it, don’t treat them differently. They need you more then you’ll ever know. “- Joanna

According to the Cleveland Clinic, early detection and treatment of CRPS is critical, “Because CRPS can cause the arm or leg to stiffen over time, the pain usually worsens without treatment and makes movement more and more difficult.” If you or a loved one are experiencing unexplained moderate or severe pain, considering reviewing the signs and symptoms of CRPS provided by the Reflex Sympathetic Dystrophy Syndrome Association and seek out rehabilitation-oriented pain specialist with experience treating CRPS.

Have you been affected by CRPS or another health condition? Sign up to share your experiences with Health Stories Project!